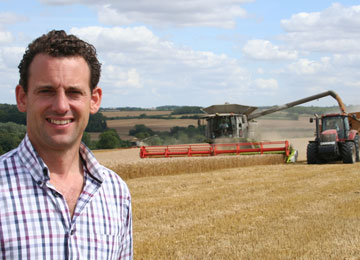 “In the past we suffered from variable establishment across the different soils,” explains Thurlow’s Farms Director Andrew Crossley. “We tried varying seed rates within fields but it was subjective and probably only picked up the extremes, rather than the more subtle variations that were actually contributing to our yield variation across some 2,750 hectares of cereals.”

In 2012 the whole estate, near Haverhill in Suffolk, was scanned by Soil Quest. The resulting soil zone maps provided five horizons in each field with a prescription created in Gatekeeper and uploaded to the tractor-mounted Trimble RTK GPS hardware. Utilising RTK Farming’s network of base stations each drill tractor is equipped with a Trimble FMX integrated display, controlling Vaderstad 800S and Horsch Sprinter drills.

Over time the degree of variation will be adjusted as a result of yearly plant, and ultimately ear, count checks. Andrew expects a pattern to develop depending on soil type, drilling date, and previous cropping. “It will be important to relate the variable seed rate yield maps to the previous flat seed rate established crops and then to the different zones used now within each field,” he says.

The technology will be extended to the bean and oilseed crops over the next few years. “We may also use it for automating increased rates under woodlands or areas repeatedly affected by pest damage. With the availability of specific software available from Vaderstad and Trimble we’ll also be able to operate auto-shut-off half-widths on running headlands, further reducing overlaps,” says Andrew.

RTK Farming uses this technology in an innovative precision farming network covering some one million ha across East Anglia. The farmer-controlled company has a network of 32 base stations and 23 repeaters using Trimble technology, which ensures farmer subscribers have a reliable signal at all times. By overlapping the signals the network is never stretched to its maximum limit and if one base station is temporarily lost another can compensate. By sharing these base stations and repeaters the technology becomes more affordable to farmers than it would individually.