Rural Community Champions Project
Do you know a local hero?

Since January we’ve been running a campaign to find the nation’s rural community champions – local heroes who go above and beyond the day job to make their local communities a better place to live and work. The competition was run in conjunction with FCN - a charity supported by Agrii who provide advice and support for farming families in times of crisis.

We received a huge number of nominations, so a big thank you to everyone who took the time to nominate their local champions. 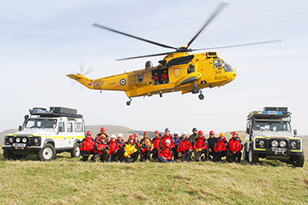 The final votes have been tallied and we are delighted to announce that the Border Search and Rescue Unit (BSARU) is the winner of our nationwide search for Rural Community Champions – winning £1,000 to put towards its local work.

Last month we announced the three regional finalists for the competition from over 100 nominations across the UK – Norfolk farmer David Jones, BSARU in Kelso, and Lingen Community Broadband, which based in North Herefordshire - one from each Agrii region – North, East and West. Since this announcement, our customers have been busy voting for their favourites at Agrii iFarm events this summer, with the BSARU coming out on top when voting closed after the last event.

The volunteers at the BSARU provide mountain rescue assistance in the rural community of the Scottish borders, and are on call 24 hours a day, every day of the year. Many of them juggle working full time in agriculture with their volunteering duties for the BSARU. Police Scotland rely heavily on the team as a resource to search for missing people in rural areas and members of the unit are trained to the same search standard as specialist police units.

The unit covers the Eastern Borders, Lammermuir and Cheviot Hills, but is often called in to assist other teams throughout Scotland and the North of England. In January alone the team of volunteers were called out on five occasions, in appalling weather conditions, to search for missing or stranded walkers – equating to 412 man hours over and above their normal working day.

A group of volunteers who have provided a communication lifeline to their local rural community – giving them access to fast broadband when others thought it wasn’t possible. The team has dedicated endless hours to connect over 100 rural...

Stuart and his team of volunteers at the Border Search and Rescue Team (BSARU) all freely give up their time to serve others in need. Police Scotland rely heavily on the unit as a resource to search for missing people in the challenging...

David is a farm manager at Morley Farms in Norfolk, who uses his passion, enthusiasm and endless energy to promote agriculture to the public. Operating special school visits across Norfolk, David accompanies children out on the farm...

As well as the three regional finalists, we had 17 local winners who will each receive a cheque for £50 towards their cause. These are:

We will be contacting each of the above shortly to inform them of their win, and to thank the nominators for entering them into the competition.

Once again, a huge thank you to everyone who entered the competition and made nominations. Thank you for getting involved.
We would also like to thank Suzuki for their generous support of this Project.