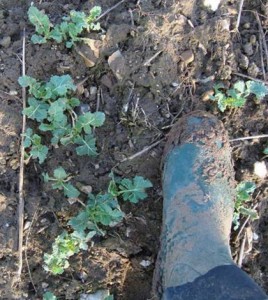 On behalf of GrowHow and ADAS, Agrii are hosting one of the sites taking part in a three year project looking into Sulphur responses in winter OSR. The objective of the trial is to understand if current Sulphur recommendations need changing due to progression in agronomic practice where N applications are dependent not only on the soil N supply but the size of the canopy in spring. The Agrii site hosting the trial is the Fincham R&D Site in Norfolk, chosen because of its Sulphur deficient status. The two other sites hosting trials are ADAS High Mowthorpe in North Yorkshire and ADAS Rosemaund in Herefordshire. The trials are spread across the country to ensure different growing conditions. The selection of sites is dependent on the likely Sulphur status, whether is it deficient, moderately deficient or sufficient.

Nitrogen Strategy within the trial

The trials include two Nitrogen treatments. Both N rates were calculated on a canopy management basis, either to produce a 3.5t or a 5t/ha crop. The Nitrogen rates at each site were calculated by the GrowHow N-Min & N-Calc Service. The N-Min analysis measures the two components of soil Nitrogen, those being Soil Mineral Nitrogen (SMN) and Additionally Available Nitrogen (AAN). SMN is Nitrogen which is available in the soil at the time of sampling and AAN is Nitrogen which becomes available between spring and harvest. The Nitrogen Calculator uses the soil N, spring crop N and target yield to calculate the appropriate fertiliser rate.

In order to understand if the Sulphur recommendations have changed and are different between low and higher yielding crops, a series of Sulphur rates were applied including a zero S treatment. This ensures an optimum rate can be calculated. The Sulphur rates applied were 0, 30, 60, 90, 120, 150 kg SO3/ha. To date, the experiments at each site have experienced two very different and difficult seasons and it is too early to draw definitive conclusions on changes to Sulphur recommendations. The last two crops grown at Fincham have been drastically different in terms of the size of crop in the spring and the overall supply of Nitrogen.

The low spring GAI for the Fincham site in 2011 meant that the crop did not have the potential to reach the 5t/ha yield target due to the crop never reaching its optimum canopy size this was due to drought conditions at drilling and in the spring. However visual differences in crop biomass were observed where 30 kg/ha SO3 was applied compared to 90 kg/ha SO3. In 2011 the optimum Sulphur rate at each site was 63 kg/ha SO3 providing an average yield response of 0.4t/ha worth £146/ha (based on OSR @ £364/ha).

For the 2012 crop the spring GAIs on average were 3 (150 kg/ha N) but as high as 3.4 (170kg N/ha). Due to the large amount of N already in the crop this meant that the Nitrogen rates for the trial were significantly lower compared to the previous year. To achieve a 3.5t/ha yield the calculated N treatment was 93% less than that applied in 2011 and to achieve a 5t crop the N treatment was 63% less. This highlights how different fertiliser requirement changes between seasons due to size of the crop and soil N supply in early spring. We will report yield results at the forthcoming Farmer meeting at Fincham.

The site at Fincham was drilled on the 30th August and Agrii have the opportunity to demonstrate the trial throughout the forthcoming R&D events this autumn, we will also report on our other Sulphur related R&D projects. As always, we are grateful to the hosts of the Fincham site for their cooperation and we look forward to seeing your there on 14th November. For more information, please contact Tom Land on 07730 764043 or tom.land@www.agrii.co.uk.