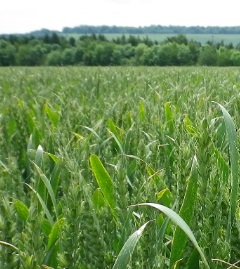 Normally late autumn wheat drilling is regarded as anything from mid October through to the end of the calendar year. However, the conditions of the past few years have led growers to drill all the way through into the spring with winter varieties, with generally positive results.

The HGCA produces a recommended list for the late autumn which compares both winter wheat types and so called alternative wheat types. In essence those latter varieties are ones that require little vernalisation and can equally be drilled after the normal cut off date for winter varieties. Recently breeders have been bringing forward a greater number and agronomically improved alternative varieties and this combined with the difficult conditions for many last year has resulted in a far larger number of growers trying the alternative wheat types.

Mulika is by far the most popular variety of the alternative types and the fact it is capable of attracting NABIM Group 1 premiums gives it the edge for many growers over some of the other alternative types. This is followed in popularity by an old favourite Tybalt (Group 2) and newer varieties KWS Alderon (Group 4 Hard) and KWS Willow (Group 2). The latter two have been showing some yield advantages over Mulika and Tybalt and are competing with the best of the winter wheats in official trials data. Agronomically there is not a lot to choose between them though it should be noted that Mulika is a bit taller than the others but does have the benefit of Orange Blossom Midge Resistance.

Growers tend to favour the winter wheat types at the front end of the late autumn ‘slot’ and certainly with very few exceptions most can be drilled through the October/November period. And as has been previously mentioned, many growers now have experience of drilling some of these varieties in Jan/Feb and even some into early March.

Though growers must always check the latest safe sowing dates for each variety. Varieties such as Conqueror and Duxford have long been favourites in the later drilled slot but varieties such as KWS Santiago and KWS Kielder should also continue to deliver their high yield potentials albeit with the relatively lower yields associated with later drilling. Some growers will also be looking at going after maize or roots. Cocoon has the highest Fusarium resistance on the list and Invicta will also deliver a decent performance.

One other variety, not on the list, to consider is Xi19. Still favoured with Group 1 premiums by millers and suitable for drilling from October through to the end of February. So growers have a number of options to consider and hopefully this autumn will deliver better sowing conditions than we had in 2012!