The key to maximising Dry Matter Intake is highly palatable grass that encourages longer grazing time, higher bite rates and better utilisation of forage. Although sward composition, length of ley and soil fertility all impact on palatability, applying sodium to grass is the simplest and most economic method of ensuring optimum palatability.

Sodium – an essential nutrient for livestock

The benefits of Sodium for grass

Although grass does not need sodium, its uptake produces significant benefits, including:

Extensive trials by the University of Bangor have shown that sodium can increase grass quality and animal performance. Sodium increases the sugar content of grass making it
sweeter and more palatable, and it also stimulates saliva production which increases appetite. This combination of higher palatability and increased appetite ensure higher DMI and improvements in animal output. The table below shows the Bangor data.

Applying agricultural salt – which contains 50% sodium – creates additional work and is not particularly efficient as sodium is not tightly held in the soil. Ideally, sodium should be applied little and often – 10kg/ha for each grazing cycle – to ensure maximum availability and uptake. 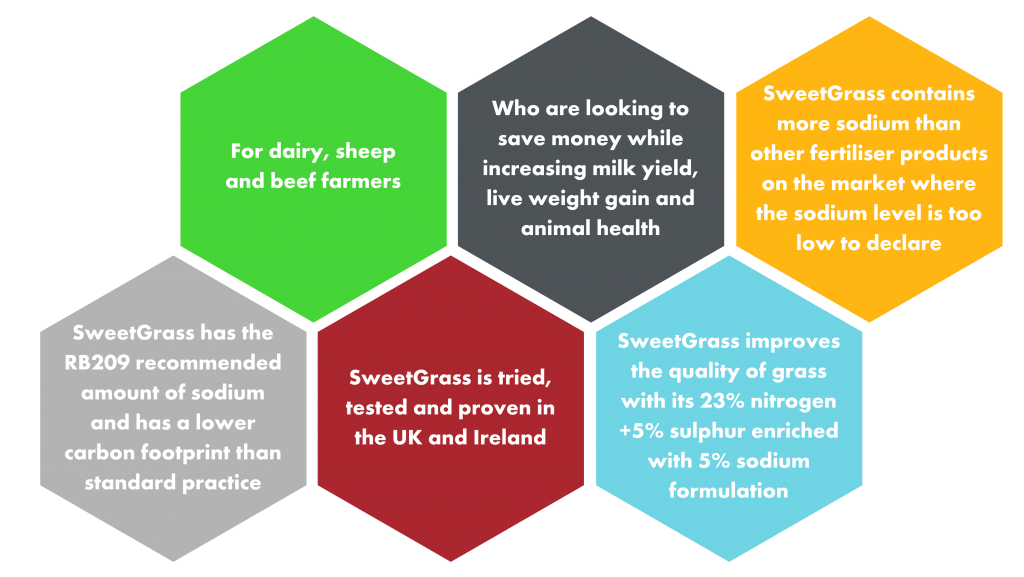 SweetGrass contains a high-quality granular sodium that is compatible with other nutrients, which allows it to be applied within the standard fertiliser programme without any additional work.

SweetGrass can be applied throughout the grazing season at 125-250kg/ha to provide optimum inputs of sodium along with nitrogen and sulphur.
Additional micronutrients, e.g. selenium and copper, can also be added on request

Have a question about SweetGrass? Get in touch: