One of the benefits of improved P availability is improved root growth and higher root mass, meaning the plant is able to maximise the uptake of other macro and micro-nutrients.

Phosphorus is essential for crops

Phosphorus is essential for the general health and vigour of all plants. It is required for plant respiration and photosynthesis as well as cell division and growth.

How to release locked-up soil Phosphorus

Built on our unique P Reserve technology, Agrii-Start Release works in the soil (it chelates soil nutrients P, Zn and Mn) preventing lock-up and in turn, increasing the Release of phosphate and other crop nutrients for uptake through plant roots.

Release is soil-applied and works on cations in the soil that displace the phosphate that is locked up with Aluminium, Calcium, Iron and then releases them into the soil for uptake by plant roots.

Agrii-Start Release is particularly effective on high-P soils to help unlock P for crop uptake on sites where P availability may be limiting. But could also be applied on soils where insoluble P fertilisers have been applied.

Agrii-Start Release can be applied to both Autumn and Spring-sown cereals up to GS29. The product can also be used on OSR, Maize, Sugar Beet, Potatoes and Veg Brassicas 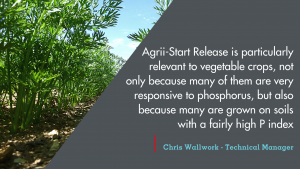 Spring barley trials at the Agrii Carnoustie iFarm site, recorded a yield response of + 0.45t/ha (Harvest 2020) with the inclusion of Release, and grain phosphate levels were elevated by 7.5% P – a notable increase in what has been a really challenging year.

Chris Wallwork, Agrii Technical Manager for Horticulture, says:
“Agrii-Start Release is particularly relevant to vegetable crops, not only because many of them are very responsive to phosphorus but also because many vegetables are grown on soils with a fairly high P index.”

Where vegetable crops are grown on soils with high P indices due to historic fertiliser use, Agrii-Start Release can make the existing phosphorus in the soil more available, reducing the need for additional P fertiliser and making it extremely good value for high-value crops such as field vegetables.

Have a question about Agrii-Start Release? Get in touch: