RB209 states field brassicas need 50-75 kg SO3 /ha/year, but trials with higher rates based on Dutch practices have led to better yields and crop quality

The role of sulphur in supporting crop quality is widely recognised, but the introduction of hybrid varieties with greater yield potential has led some to question whether established nutrient practices are appropriate in meeting crop needs.

The need for more applied sulphur is not new. The amount supplied by atmospheric deposition fell to less than 5kg S /ha/yr in the early 2000s and is now estimated at 1-3.5kg S/ha/year, equivalent to 2.5-8.75kg SO3 /ha/yr.

The amount available from atmospheric deposition is now so low it is barely worth factoring into calculations, says Ross Greenhill, Agrii agronomist. “Levels of sulphur dioxide (SO2) emissions have fallen by 96% since 1970 and will continue to fall: the UK is committed to cutting SO2 emissions by 88% of 2005 levels by 2030,” observes Mr Greenhill.

The need to review nutrient practices was impressed upon on Mr Greenhill during visits to the Netherlands where it was made clear that UK practices were insufficient to meet estimated crop needs. 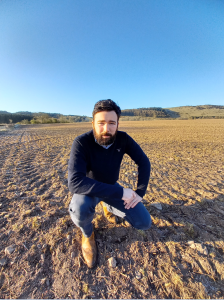 “I’ve been privileged to have the opportunity to attend open days in the Netherlands during my career and the time spent with breeders is always worthwhile. On more than one occasion, breeders from the two seed houses that supply most of the Brussels sprouts varieties grown in the UK told me that we under-applied sulphate.

The newer hybrid varieties, especially the earlier types, I was told, require considerably more sulphate than is the UK practice to apply. The suggested rate was 250-275kg SO3/ha/year.”

This contrasts with the 50-75kg SO3 /ha/yr stated by the Nutrient Management Guide (RB209), so a revised fertiliser protocol was developed by Agrii and adopted by an interested grower.

“Where sulphur is in short supply it leads to a noticeable impact on yield and quality, so there is great interest among growers as to how this may be averted. The intention of this trial was simply to see if sulphur applications in line with Dutch practices resulted in improved yields and quality,” says Mr Greenhill.

Product Timing and Type are Key

Application timing and product type were the next considerations with experience suggesting early applications are more worthwhile.

“I’ve found that applying most of the sulphur pre-planting, especially for early crops, is often more effective. Liquid products containing nitrogen and a high amount of sulphur, such as 9.8% N + 27.5% SO3 at 1000 litres/ha delivers 98kg N/ha and 275 kg SO3/ha. Applying roughly 100kg N/ha as the base application with the full amount of SO3 is perfect.

“With later harvested crops a combined N+S granular product applied at the third split will help to ensure continued sulphur availability. In Scotland it is not unusual for Brussels sprouts to be in the ground for more than 12 months to extend the period of supply, so it is important to ensure nutrients are in a freely available form,” he says.

A top-up of sulphur at the third pass will likely take the total applied amount to more than 300 kg SO3/ha but growers should not be discouraged, says Mr Greenhill.

“It may seem like more than enough based on previous practices, but experience so far suggests it is well worthwhile with increases in marketable yield as a result. The best crops I have seen have been from this regime.”

Determining the optimum rate to apply remains a work-in-progress with further trials planned, but to Mr. Greenhill, the need for higher nutrient rates is an obvious consequence of other agronomy changes.

“Varieties with greater yield potential are just one reason to review practices. The loss of Dursban (chlorpyrifos) led to growers switching to either Verimark (cyantraniliprole) and Tracer (spinosad) as a module drench.

One positive I have observed is that these crops demonstrate more uniform growth, which suggests there was a level of phytotoxic damage to plants from Dursban. The impact of this is now coming to the fore as unchecked growth from more uniform plants is resulting in higher yields. It seems logical that these crops will have a greater nutrient demand,” he says.