The gradual withdrawal of herbicides has emphasised the need for a truly integrated approach to weed control.

Cultural measures such as a wide rotation and an appreciation for the little details such as consistent crop spacing to support the use of mechanical hoeing have assumed greater significance as the focus becomes one of protecting the effectiveness of the herbicides we have left for the long term.

To give some examples, onion and leek growers have recently lost bromoxynil (as in Buctril), an effective contact herbicide, and chlorpropham (as in Cleancrop Amigo and Aliacine), which was a useful residual herbicide.

Carrot, parsnips, and umbelliferous herb growers have lost linuron while brassica growers have had their last opportunity to use pyridate (as in Lentagran). Only clopyralid (as in Dow Shield 400) remains for use as a post-planting contact herbicide in brassica crops.

In response, Agrii vegetable crop trials have been used to investigate alternative herbicides, different product combinations, and new strategies to ‘fill the gap’ created by product withdrawals. These trials help to ensure that the advice Agrii agronomists deliver is based on the latest available information produced from replicated trials.

A key objective of our trials is to find that balance between minimal or possibly acceptable crop safety and adequate weed control for any herbicide to be used in vegetable crops.

Many growers will have visited our herbicide crop screening trials which we run on the Elsoms Seeds site at Spalding as part of the Brassica Open Days every October.

This trial is used to evaluate various herbicides over 16-18 vegetable crops species and 2-3 flower crop species. In this trial, we are specifically focused on crop safety of the herbicides being assessed, and any candidates which have potential use will then be included in replicated small plot trials to gather further data.

Later stage herbicide trials are usually conducted in commercial crops and on soil types applicable to that crop, for example, carrots on light sandy soils. 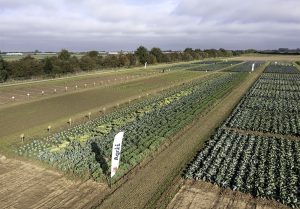 Combatting Groundsel and other problematic weeds

One weed that is of increasing concern is groundsel (Senecio vulgaris), due to known resistance to certain herbicides. This weed is a ‘no-no’ for growers of salad crops, due to its inherent toxicity. Its control is currently reliant on dimethenamid-p (as in Wing-P) but it concerns us that such widespread use will result in resistance.

Agrii trials have identified several herbicides which provide control of this weed and we are hopeful that we will see these active substances approved before resistance to dimethenamid-p occurs.

Other weed species of concern in brassica crops are redshank (Persicaria maculosa) and fat hen (Chenopodium album) while in carrots and parsnips we have issues with is scentless mayweed (Tripleurospermum inodorum).

We continue to investigate solutions for these problematic weeds.