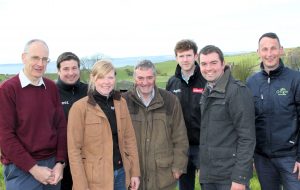 Stranraer beef producers, John and Robert Fleming are challenging accepted industry norms with a series of productivity-improving and risk-reducing measures that point the way ahead for grazing livestock producers in an increasingly uncertain political as well as economic future.

At South Milton, Glenluce near Newton Stewart, they and Agrii agronomist, Lorna Galloway have taken the proverbial – and in this case very much Aberdeen Angus – bull by the horns in transforming forage management across the 200-cow commercial beef business run alongside their well-known Stairhaven pedigree herd.

Working with SoilQuest, DLF Trifolium, Origin Fertilisers and Lancrop Laboratories over the past three years in a ground-breaking Agrii iFarm project, the team has developed a recipe for massively increasing beef output while reducing input costs in almost every department – with the possible exception of liming and electric fencing.

Amongst other things, beef production from grazed grass has been increased by a factor of more than five through a combination of soil mapping and variable rate liming, sward renewal, specialist fertilisation and carefully managed paddock grazing.  Forage utilisation from traditional beef and sheep land on over-seeded pasture has, indeed, been increased to rival the levels achieved by the best Irish dairy farms at almost 17t DM/ha, producing just over 3000 kg/ha of beef from a 260-day grazing season at a net margin of over £6000/ha.

At the same time, far greater precision in liming, better quality swards and more effective use of slurry reduced overall farm nitrogen use by a third last season.  Extending the grazing season and boosting home-grown protein with mixed arable silages and lucerne meant the family used no concentrates at all for their rearing stock in 2016, giving savings of over £30,000 in the concentrate bill too.  More worm-free young stock grazing has further enabled valuable economies to be made in anthelmintic use.  And improving the palatability and trace element status of their grass has allowed additional economies in mineral supplementation.

“We’ve been using a lot more lime than we did in the past to correct acidity problems that had crept up on us over the years,” explained Nuffield scholar, Robert who runs the quality Angus beef business his father John developed after going out of dairying in 1997 to double their acreage by purchasing a neighbouring farm. Our electric fencing bill has shot up as well. But these extra costs are nothing against the productivity improvements and input savings we’ve been able to make as a result of our work with Agrii.

“Lorna and the iFarm team have opened our eyes to the potential we have to improve our productivity and reduce our risk by making more from home-grown forage in a host of innovative ways. With their help we’re transforming our whole production approach to make the very the most of the grazing abilities we’ve always concentrated upon in our Stairhaven breeding.” 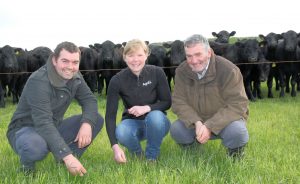 Keen to make better use of their slurry after installing a separation system and boost output from home-grown forage, in 2013 the Flemings turned to a precision agronomy system then employed almost exclusively by arable farmers. Conductivity scanning an initial 65 ha of the ground– and subsequently the entire 240 ha – at South Milton showed pHs across the farm’s many soil types ranging from 5.1 to 6.8.

“With hindsight, I suppose this wasn’t surprising,” said John Fleming. “Like many people, liming was something we did field-by-field every 8-10 years as we reseeded each in turn. And we limed on the basis of whole field pH measurements rather than sampling each soil zone individually as the SoilQuest system does. Like many too, our slurry applications were always concentrated on the more accessible fields near the steading, so the acidity levels built-up far more rapidly here.

“Once we discovered this we set about a major programme of liming with high availability, Calcifert.  With the long haul from Cumbria or Yorkshire this wasn’t cheap but variable application to the SoilQuest management zones meant we only used what we strictly needed to bring all the ground up to at least pH 6.  Since then we’ve been topping-up with lime every year and applying our slurry far more evenly across the farm. This has made no end of difference.”

From this start the South Milton forage improvement programme got into full gear in 2014/15 with the establishment of a series of field-scale trials as part of Agrii’s first-ever forage iFarm.

Over-seeding set stocked land that hadn’t been touched for over 35 years with high quality DLF grass and clover mixes in April 2015 dramatically boosted its productivity. Rotationally grazing the rearing stock in 1 ha paddocks based on regular measurements of cover with a rising plate meter last season more than doubled its stock carrying capacity to deliver exceptional levels of output over a much longer grazing season.

“We took full advantage of the excellent 2016 grass growing conditions by measuring the sward cover weekly and using a combination of grazing and silaging to stay ahead of it,” reported Robert. “So, unlike the past, we never had to top it once. What’s more, we were able to keep the quality of the sward high throughout the season and maintain very healthy clover contents. Lower faecal egg counts also meant we used less anthelmintics than normal.

“This experience has led us to move our entire system to paddock grazing – hence the increase in the electric fencing bill. We’re producing so much more grass now that we’re finishing most of our stock instead of selling the bulk as stores and are running 130 extra young stock on performance-based contracts with neighbours this season on separate land we used to need for our own herd.” 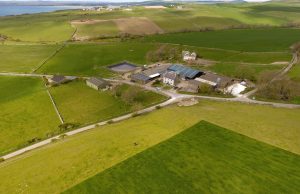 Further iFarm trials in 2015 and 2016 explored a range of opportunities for boosting the protein content of the wholecrop cereal silage the Flemings have always grown to provide extra winter fodder and a productive crop under which to establish new grass leys.

In both cases the Scotmaster long-term ley mixes sown under them came through well and took off like a rocket with the extra nitrogen supply from the legumes. They were ready to graze almost immediately after harvest in late August.

Equal successful has been the farm’s first attempt at growing lucerne. The field sown in  April 2016 established well with remarkably few weeds to yield a total of 4.4 t DM/ha at 17% protein in its initial, low production year. On this basis, the team calculate that, together with the arable silage, the 4ha they plan to grow each year should provide a 100 day 15% protein ration for 200 stores.

“Home-produced protein is giving the business a valuable extra string to its beef production bow,” pointed out Lorna Galloway. “The arable silage is proving just what we need. And, although it’s early days yet, the lucerne looks to have excellent potential.

“Alongside these developments, we’ve also been seeing a really encouraging response to our use of specialist fertilisers to improve grazed grass productivity, palatability and mineral contents.

“There’s lots of evidence that including sodium with grassland fertiliser increases the sugar content, intake and digestibility of grazed grass,” she said. “And while we don’t yet have the detailed data to confirm its value at South Milton, last year the cattle showed a clear and consistent preference for grazing the half of the field we fertilised with Origin Sweet-Grass rather than the half receiving the same amount of nitrogen and sulphur without added sodium.

“Having the Sweet-Grass enhanced with cobalt and selenium to counter the low contents we always see in our soil and forage analyses and blood testing at South Milton has further boosted the levels of both minerals in our silage by 75% or more. This meant John and Robert didn’t have to use any boluses, drenches or lick tubs for their youngstock last season.

“It’s all about making the forage work harder in every way we can. That’s why we’re also looking at using polysuphate both as a source of phased-release sulphur and to provide extra potash, calcium and magnesium. And employing SoilQuest to ensure we use the right types of lime for the most productive ratios of calcium and magnesium across our ground.”

“More and better forage production and utilisation is driving everything we do now,” insisted Robert Fleming.  “With the iFarm team’s help, we’re seeing so many new opportunities to really up our game by growing forages with as much precision as any arable crop and making sure we convert every bit we grow into quality beef.

“We’ve already been able to double our output without taking on any more land and plan to be producing 3000 kg of beef from at least 200 of our 240 hectares reason within the next five years. With our Angus genetics, this will leave us as well-placed as we can be to thrive in whatever world we find ourselves after 2020. We’re really excited about what the future holds.”