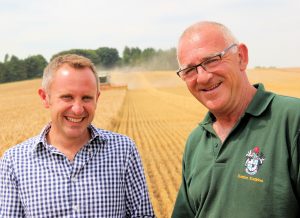 Equipping its farming for an increasingly challenging future in a way which supports the business’ strong environmental and social commitments has been the key focus for the team at Sir Richard Sutton Estates in Lincolnshire over the past four years.

Led by the 6000 ha family estate’s head of farming, Chris Baylis, major changes across the 3600 mainly arable hectares run from Hall Farm, Stainton-le-Vale, near Market Rasen have put it on a firm path to reliably breaking-even before subsidy.

Final feed wheat yields across the Wolds land and heavy ground near Grimsby, indeed, averaged  fully 25% above the five-year mean at 11.72 t/ha in 2015. Winter oilseed rape at 4.55 t/ha, winter barley at 9.31 t/ha and spring barley at 7.94 t/ha were also well up on their historic averages.

At the same time, the most effective agronomy and cost control kept average 2015 feed wheat variable costs down to £47/t and total production costs to £108/t, while the best crop marketing delivered an average wheat selling price of £128/t.

“Like most, we’re certainly having a less good harvest this season,” pointed out Chris.  “However, 2015 underlines what we can do to ensure the sort of viability essential to support the strong investment in nature conservation that has always been a priority here. 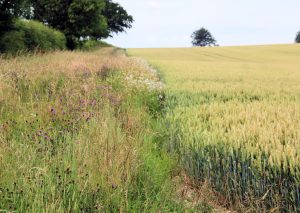 “We have an outstanding environment in the Lincolnshire Wolds AONB and are a long-standing LEAF demonstration farm. Our 400 ha of environmental mixtures and margins, 100 ha of mixed woodlands and many miles of managed hedgerows support a fantastic diversity of wildlife which we are proud to share with as many as 3000 Open Farm Sunday visitors.

“As well as improving immediate viability, the changes we’ve been making following our complete review of the farming business in 2012 are building the level of arable performance consistency we need to deal with a less predictable climate, declining agrochemical efficacy and the inevitability of much-diminished future farming support.”

Increasing soil health, reducing machinery costs, raising operating efficiencies and extending rotations are all improvement priorities at the Stainton Estate with which the vast majority of arable businesses will be familiar.

The ways in which Chris Baylis, farm manager, Malcolm Vaughan and their small arable team have addressed them with Agrii’s research, agronomy and farm service support are, however, quite different to many; and quite different too from the direction of previous travel.

Having successfully direct drilled 25% of the farmed area in 2011 when Chris joined the team as Lincolnshire estate manager, the plan was to move to 100% no-till within four years.

His concern over the viability of such a rapid move with ground that had always been deep cultivated led this to be scaled back to the 40% needed to justify the purchase of the Great Plains drill  from 2012 – with the intention of running at this level for a complete rotation before fully committing to direct drilling.

That autumn 250 ha of direct-drilled winter rape was completely lost to slug seed hollowing within three to four days of sowing. The slugs had such a field day along tunnels left under the closed slot that the only crop to emerge was in the tramlines. As if this wasn’t enough, the unbelievable wetness of the 2012 winter also meant that, of the 700 ha of wheat the team direct drilled, only one 24 ha field made it to harvest – the rest having to be replaced by spring crops or fallow.

“Like many growers, 2012 taught us some valuable lessons,” recalled Chris.  “First and foremost, it underlined that our soils really weren’t ready for direct drilling.

“Despite its excellent performance the previous year, it also showed us that the drill wasn’t suitable for our ground.  More than anything else, though, it highlighted that we needed a regime flexible enough to cope with a wide range of soil and weather conditions in a far slower and more opportunistic move towards our no-till aspiration.”

So, in 2013 the Estate sold the direct drill and replaced it with a Vaderstad Rapid fitted with a Cultivation Solutions toolbar, which has since proved its all-round value. By adjusting the configuration of the legs, discs and coulters the team has a single machine which can drill direct, drill in strips, and drill into both mill till and ploughed Wold or heavy ground with equal effectiveness.  This means sowing can be matched to conditions in the most flexible way possible.

“Where the land is in good nick, we can drill our wheat directly into rape stubbles,” Chris Baylis explained. “But where we have issues with soil condition we can drill after a pass with our Simba Solo SL. The Rapid also allows us to drill our rape in 50cm bands with liquid fertiliser either directly or following cultivation.  And it’s every bit as effective drilling winter barley in September on the Wolds, winter wheat in October on the heavy ground where black-grass is problematic or spring barley or beans after autumn ploughing on either.

“As part of our decision to merge the Wold and heavy land businesses into a single management unit, we acquired another 8m Rapid to replace the Horsch drill that worked well on the Wolds but was unsuitable for the heavier ground.  At the same time, we disposed of a large amount of surplus machinery and established a whole business replacement policy across our entire fleet to deliver a known annual machinery cost over the next 20 years.

“Like our two Claas Lexion combines, we now run the drills in tandem to maximise our working capacity, managing our cropping in roughly 120 ha blocks. About two days of capacity for cultivation, a single day for drilling and combining, and half a day for spraying in each case, this means the least possible machinery movement and downtime. It also means we can get in and out with an operation across an entire crop block in a very small window for the timeliness which is more essential than ever these days.

“This rationalisation has given us running cost savings of more 20% over two years. Crucially too, while we’ve reduced our full-time arable staff from six to four, streamlining the operations in this way hasn’t put any more pressure on individual team members.

“The programme has had the ownership and involvement of our whole team and has actually given everyone involved extra time to step-up their training and personal development.  Both our sprayer operators are now BASIS trained, for example, giving our agronomist two valuable extra pairs of eyes. We also all now profit from annual soil management training  with specialist, Philip Wright.”

Alongside the operational and cultivation changes, the Estate’s heavy land rotation has also seen significant change, mainly to combat inevitable black-grass problems. From a five year cycle of two wheats, oilseed rape, wheat and beans – all winter sown – it has been extended to winter barley as a better entry for OSR followed by winter wheat, then spring wheat and spring beans ahead of another first wheat over six years.

In line with Agrii’s pioneering Stow Longa model, two consecutive spring crops with the option to plough every five or six years, if necessary, and no wheat sown before October 20th forms the central defence against the weed. Any field coded ‘red’ in the team’s traffic light inspection programme is further taken out of the rotation for a fallow.

“We’ve learnt the hard way that zero tolerance is vital with black-grass,” pointed out Chris Baylis. “Yes, it’s risky to sow late. But it’s even more risky to sow too early and suffer the yield depression and seed return.  Our new regime gives us the capacity to drill all our heavy land wheat in three days and the flexibility to drill it in the best way for the conditions. And if we don’t get a decent window, we’ll hold off and drill spring wheat instead, making the most of the extra flexibility we have with farm-saved seed and Agrii mobile dressing.”

Concerted programmes of annual drainage and ditching renovation have also been important elements in the Lincolnshire team’s improvement efforts.  As have variable rate sowing to SoilQuest conductivity scanned management zones on the Wolds, and better-informed variety choice and agronomy based on the iFarm trials the Estate hosts.

Cover and catch cropping have also been trialled in various forms over the past three to four years. A mixture of black oats and tillage radish is currently favoured.  Even so, concerns over establishment timing and slug populations leave the team preferring to move ahead with caution and as specific opportunities arise – as they are now doing with direct drilling.

“No-till remains our eventual goal for the greatest soil health and operating efficiency,” concluded Chris Baylis. “But we’ll be continuing to take our time, letting the land guide us in its adoption as we improve our soils’ drainage, carrying capacity, organic matter and overall resilience.

Optimistic for the future

“The great progress we’ve made in the past few years means we’re very optimistic for the future. There may be plenty of risks out there we can’t fully control. But with the flexibility we’ve built into our business and the commitment and enthusiasm we have in our team, we are confident we can manage our farming to minimise them. And, in so doing, uphold the environmental excellence for which the Estate has long been known.”