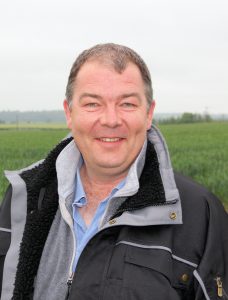 At New Farm, Elsworth near Cambridge, Edward Davison is happy to sacrifice margins to get on top of some of the country’s most problematic black-grass. But thanks to a specialist spring barley ideally suited to his heavy chalky boulder clay ground he’s hardly had to.

Indeed, in 2015 the 120 ha of Explorer he grew for the first time on a Budweiser contract with Agrii, Glencore and Crisp Malting delivered almost the same margin as the first wheat on which the farm’s  600 ha arable rotation is based. At the same time, it slashed the black-grass population.

“We discovered our black-grass was Triple R resistant more than 10 years ago,” Edward explained. “We have it sampled every year and never have a sample coming back at less than RRR.  We haven’t bothered using Atlantis for four or five years now.

“We’d been spending heavily on residuals to bolster wheat performance.  Despite doing everything we could in our five-block rape/wheat/rape/wheat/wheat regime, though, escalating weed levels and declining returns persuaded us to throw everything up in the air in 2015 and introduce at least one spring crop into the rotation.

“Apart from anything else, it’s sobering to see the combine yield meter running along nicely at 10-11 t/ha in the wheat only to plummet to 5t/ha or less whenever you hit a bad black-grass patch. Something clearly had to change.

“We considered our options carefully and, despite always having rated barley as little more than a weed itself, decided to grow it for the first time. Our decision was confirmed when we discovered Explorer and the work Colin Lloyd and his Agrii research team were doing with similarly bad black-grass at Stow Longa.

“A high yielding, relatively early maturing variety that can be sown late into March on heavy ground to earn an extra malting premium for a higher N sample was an attractive proposition. But the clincher for us was the variety’s superior weed-smothering ability.”

This ability was confirmed in no uncertain terms in 2015 with an almost six-fold reduction in the black-grass population of one field in which a full-length strip was left unsown. Agrii monitoring revealed a black-grass count of more than 700 ears/m2 here, against 120/m2 in the Explorer alongside it. Not only that but the ears were well down in the crop, very much smaller and with seed of suspect viability.

As soon as the crop was harvested in mid-August, the black-grass beneath it took off like a rocket, highlighting the extent to which it had been suppressed by the barley and giving the farm the bonus of a massive early glyphosate weed kill in the stubble.

In addition to its impressive competitive performance, the Explorer averaged 10.4 t/ha at 1.72% N from 150 kg/ha of nitrogen to deliver a gross margin of almost £950/ha. This was only just below New Farm’s average first wheat margin, despite a grain N just too low to qualify for the £5/t additional Budweiser premium. 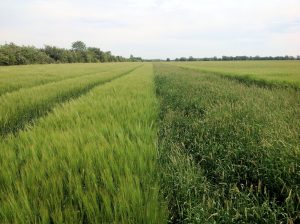 “It was a classic case of nitrogen dilution,” explained Agrii fertiliser technical manager, Tom Land who planned the nutrition and monitored the crop with Edward. We targeted a 9t/ha crop – with 50 kg/ha of N in the seedbed before drilling on March 23, another 50 kg/ha as soon as we could see the rows and a final 50 kg/ha at GS21 in late April.

“However, the crop took advantage of fantastic seedbed conditions, a complete lack of compaction thanks to regular rotational subsoiling, sufficient soil moisture throughout and a long, cool summer to blow our yield assumptions out of the water.

“If it hadn’t yielded as well as it did we’d easily have made the Budweiser spec to earn the extra premium.  But then, with the full Propino premium anyway, the 10.4 t/ha crop earned more than 9t/ha would have done at the higher premium level. So we certainly weren’t disappointed.

“Based on this experienced we upped the nitrogen rate to 170 kg/ha – all the extra in the final split –  in the 120 ha of Explorer grown again this past season as a second successive spring crop,” Tom pointed out. “Alongside this, we fine-tuned the micro-nutrition based on three separate crop tissue tests and the responses seen in several years of AgriiFocus Technology Centre research.”

“Other than these tweaks, we feel we’ve got the agronomy pretty much spot-on,” said Edward. “Despite the noticeably less good growing conditions, our 2016 crop came in at a very commendable 9.4 t/ha with nitrogens comfortably within the Budweiser specification at 1.90% to 1.99%.”

Stepping forward with a new drill

“Our next step forward will be the way we drill the crop, using a newly acquired and ultra-flexible Sky Easydrill.

“It’s extra capacity will be really valuable in cutting the wheat drilling days we need down from eight to six, giving us more opportunity to delay autumn drilling as late as we dare for the best black-grass control. The fact that it moves so little soil as either a no till or min-till drill will be crucial in this respect too – for both autumn and spring drilling – as will its ability to drill into cover crops should we go down this route in the future.

“The spring barley will also profit from seedbed fertiliser placed precisely with the seed rather than incorporated ahead of sowing, as we’ve done to date. And, every bit as importantly, the drill’s very low power requirement is well within the capabilities of our tracked John Deere 8360RT.

“After our second spring barley in a row we had planned to put the ground into oilseed rape,” Edward explained. “With conditions so dry and such a high flea beetle threat, though, we’ve opted for third crop of Explorer. In fact, we’ll be replacing all our planned OSR acreage with the spring barley, increasing our 2017 crop to 280 ha. In addition to doing us well margin-wise, this should strike a big blow against the black-grass.

“From now on we’ll also be taking a far more flexible approach to our rotation,” he added. “We intend to have at least one year of spring barley in every field, with a longer spring break wherever necessary. So, rather than having a rigid regime, my agronomist and I will be sitting down every summer to assess the situation field by field and plan accordingly.

“This is driving a coach and horses through the convenience of our original block-cropping approach. But I see it as essential if we are to secure the consistent 11-12 t/ha wheat crops we want. Although we know we can get these already, our challenge is to do so reliably across the whole farm. For which we simply have to deal with the 6-7 t/ha black-grass affected crops that always seem to pull down the farm average so substantially.”