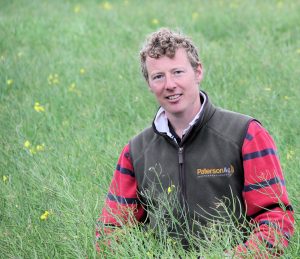 From all winter cropping on their heavy land, they’ve moved to one third spring drilling, significantly extending their wheat-based rotation. They’ve replaced winter barley with rye on their light land. Amongst other changes, they’ve switched from mostly feed to mainly milling wheats, introduced cover crops ahead of all their spring cropping and included a companion crop with all their winter OSR.

Over the past six years they’ve also added greater precision to their agronomy, fine-tuning seed, N, P and K applications with a combination of SoilQuest scanningand satellite imaging and co-ordinated through the Agrii Precision Services on-line portal. Not only that, but they’re currently moving to a no-till regime based around a recently-purchased Cross-Slot drill.

Surprisingly perhaps, increasing yields is not the main driver for all this change. Naturally, David, Guy and Vicki would be more than happy to see and confidently expect to secure valuable output gains from their efforts. However, their key priority is achieving far greater resilience – both economic and agronomic – for their business.

“We’re averaging a very acceptable 9.5-10t/ha from our first wheats and just over 4t/ha from our oilseed rape,” pointed out David. “And last year our best crop of Skyfall did over 12t/ha and our best winter rape 4.5 t/ha. But we know we need to do things differently in the future if we are to manage the increasing production and market risks we face.

“In particular, we need to use all the rotational tools at our disposal to deal with horrendous black-grass problems – even on our light land this year. At the same time, we need to effectively control serious cruciferous weeds in our oilseed rape. “We must also invest far more in our soils to make them as resilient as we can to weather uncertainties; be as flexible as we can be in our crop and variety choice to make the most of market opportunities; and put far more attention to detail into every element of our production. This will ensure we have a business able to cope with difficult seasons and markets as much as capitalising on the better times.”

Keeping on top of cruciferous weeds in Earls Hall Farm’s OSR has proved relatively simple with the Clearfield system. Sowing any problem fields to herbicide resistant ‘CL’ varieties has enabled a single autumn application of Cleranda (imazamox + metazachlor) to reliably eliminate the charlock and hedge mustard that were previously threatening the viability of the crop; and at no additional cost, thanks to the savings made in other herbicides.

Black-grass, is understandably, far more problematic.  Potatoes ahead of wheat in the light land rotation provide a good base for the most effective control.  As well as improving the economics of the rotation, replacing winter barley with hybrid rye has stepped-up crop competition.  Introducing mixed cover crops of oil radish, buckwheat, linseed and phacelia ahead of the spring barleys grown either side of the rye has also brought extra control pressure to bear.

It’s on the London and marine clay that makes up 60-70% of the farm, though, that the black-grass challenge is especially acute.  Although David and Guy sow it as late as they can, their entire 160 ha of wheat has to be in before mid-October as the ground cannot be drilled once it gets wet.  Nor can it be reliably ploughed well.  What’s more, the driest part of the country means autumn pre-planting control opportunities are almost non-existent and relentless coastal winds seriously limit spray days.

To address this, they’ve extended the rotation to a five year rape/wheat/linseed/wheat/wheat regime, introducing spring-sown Mulika as the second wheat this season.  The first time spring wheat has been grown on the farm since the 1950s, like the spring barley on the light land it has been preceded by a cover crop. 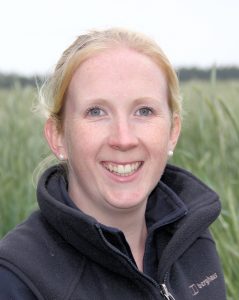 “Our 57 ha of Mulika went in very well after the cover crop this spring,” reported Vicki Brooks. “Unlike other fields, there’s very little black-grass in it. Including the cost of the cover, we’re looking for a gross margin of £640/ha from the crop – just ahead of the £620/ha we’d otherwise expect from a typical Skyfall second wheat.

“Add in the extra value of better black-grass control, soil improvement from the cover crop, greater likelihood of hitting the milling specification and more manageable workloads and we have high hopes for the switch to spring wheat.

“We’ve a lot to learn about cover crops, in particular,” she stressed. “They seemed to support rather  high levels of slugs and aphids last winter. But then again they were heaving with ladybird larvae.

“Although it’s early days yet and our mixes will take a lot of fine-tuning, they clearly have the potential to improve the workability and structure of the heavy soils and add useful extra organic matter to the light ground; especially so as part of the switch to a no till regime.” 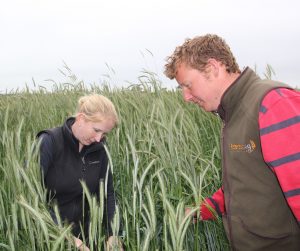 After more than 15 years of minimum tillage at Earls Hall Farm, the partnership purchased a 5m, 23 coulter Cross-Slot drill last season in a key element of the resilience-improvement plan.

David and Guy believe their heavy ground is much better structured and healthier for the fact that they’ve avoided deep cultivation for so long.  Most has organic matter levels of around 4.5% and carries heavy equipment well, providing they don’t travel at the wrong time, of course.

“We’re well-placed to take the next step,” David Lord reasoned. “The Cross-Slot is perfect for our needs. It cultivates the very minimum amount of soil, places the seed and fertiliser accurately, copes with trash and green covers well, and turns our establishment from a three to two-man operation, giving us extra time for the greatest flexibility.

“Most importantly, with no soil disturbance whatsoever across the vast majority of the field, we wake up the minimum amount of black-grass and, aided by cover cropping, help our soils improve their micro-flora and fauna, structure, drainage and water-holding capacity.

“That’s the theory anyway. Like cover cropping, it’s very much a journey for us and certainly no short-term fix.  So far, I must say, the drill is doing everything we want of it and we’re confident it will make a major contribution to our improvement efforts.”

Equally important in the team’s improvement efforts is the increasing precision they have been building into their  agronomy in recent years. While SoilQuest  scanning, zoning and analysis of the whole farm in 2014 confirmed the family’s understanding of their ground in general, it also highlighted a surprising degree of  variation across fields previously considered to be and treated as quite uniform.

For instance, it revealed fields indexing  +2 overall for either P or K actually had areas with indexes of +1 and others of +3, allowing variable applications to focus the inputs where they were needed.

The regime has also allowed variable seed rates to be introduced across the business. Coupled with satellite images automatically up-dated every two weeks as the basis for variable liquid N applications, this has done much to improve the evenness and consistency of crops.

“Integrating all the precision data through the Agrii APS portal to which David, I and our SoilQuest specialist, Sam Fordham have access allows us to set well-researched rules for seed and fertiliser rate variations and apply them across all the fields,” said Vicki. “The maps are then downloaded onto a USB stick that’s plugged into the tractor terminal so the planned rates are automatically applied to the individual management zones.

“In targeting 650 tillers/m2 for our wheat crops, we are typically varying seed rates by between +30% and -20% to account for the soil differences. So like the fertiliser, we save inputs from where they’re least needed and put extra where they will do the most good.”

Testing representative management zones for organic matter levels, cation exchange capacity and key nutrient levels last summer has also enabled the team to set valuable benchmarks in the APS field files against which they can measure the progress they achieve through the no till regime and cover cropping, in particular.

Having their field-by-field soil mapping, input, crop yield and performance data integrated on-line through APS in complete compatibility with Gatekeeper means David, Guy and Vicki always have all the information they need to improve their decision-making to hand. As well as improving day-to-day management, it allows them to keep track of the physical and financial performance of the different crops and varieties being grown to take advantage of rotational and market opportunities.

“Like the rye we’re growing on contract for Dengie Grain, for instance,” David noted. “Or the KWS Lili we have contracted at a £7/t premium over feed for 11.5% protein, as well as our Propino malting barley and Skyfall and Mulika milling wheats alongside favourite feed wheat  banker, JB Diego.

“It’s all part of the far greater attention to detail we must put into our business if we are to give it the all-round resilience necessary to succeed in a much more challenging arable world than we’ve ever had in the past.”