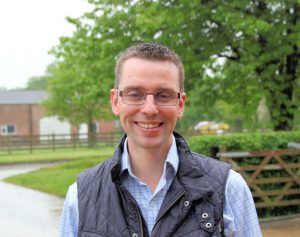 Farms manager, Peter Cartwright and his Agrii agronomist, Richard Butler have got the measure of black-grass across the Wiggins-Davies family’s in hand 1220 ha arable business at Revesby on the southern edge of the Lincolnshire Wolds near Horncastle.

That doesn’t mean they no longer have a problem with the weed, though. To the contrary, they know it will keep rearing its ugly head whenever conditions get in the way of the successful farm-wide approach they have developed over the past six years to deal with their Number One constraint to wheat performance.

As well as establishing a more effective core management regime and implementing an emergency spring cropping programme whenever serious black-grass problems re-emerge, therefore, they have been working with the Agrii R&D team to explore even more comprehensive ways of staying ahead of the weed.

These include making the most of cover cropping, companion cropping across the rotation and a range of precision technologies based on detailed soil mapping and satellite imagery.

“Spring crops have been central to our battle with black-grass that can easily knock a good 2t/ha off our wheat yields and add £50-£100/ha to our input costs,” Peter pointed out.  “But in the absence of black-grass they can’t compete with first wheat or winter OSR in current margin-earning on our first class clay loam ground.

“So, our whole approach has been to use spring cropping to get the very most out of our two big earners. It’s very much a means to an end for us, not an end in itself.”

The extent to which this ‘means’ has been effective at Revesby Farms is evident in the fact that their original target of consistent winter wheat yields of 10t/ha set in 2014 has recently been raised to 11t/ha as land coming out of three years of emergency spring cropping re-enters the main arable rotation. Equally, whereas a good 150 ha of ‘emergency’ spring wheat had been necessary in the past, just 40 ha is being grown this season.

Over the past few years, the farm’s original wheat/wheat/rape regime has been developed into a primary rotation of wheat/rape/wheat/spring break across the whole arable area. As well as sugar beet on the best land, spring beans and spring oats are the principal breaks.

Using the Stow Longa model, winter wheat drilling now never starts until October, with fields carrying significant black-grass the previous summer only drilled from the middle of the month to enable maximum weed germination and elimination ahead of sowing. Varieties are chosen for their competitiveness in Agrii trials and sowing rates increased to 500 seeds/m2 from late October onwards.

The degree of cultivation has been reduced progressively over the years as soil structure has been improved, with minimal soil movement at drilling a key priority. A 10m Horsch Sprinter has been acquired this season to allow direct drilling to become the norm.

Peter and Richard also make the greatest possible use of pre-em chemistry in their wheat – including triallate wherever necessary – to keep up the pressure on black-grass. A routine programme of clethodim, propyzamide and carbetamide does this in their OSR too.

“Experience teaches us that if we give black-grass an inch it will take a mile,” stressed Richard Butler. “So we bear down on it with every chemical as well as cultural control opportunity we have.

“Then when something – more often than not the weather these days – gets in the way and our progress is in danger of being undermined we press the reset button with our emergency programme. This involves early autumn ploughing followed by three consecutive spring crops, each preceded by a winter cover. “One year of spring cropping after the plough gives us a big reduction in black-grass,” he pointed out. “But two years is better and we’ve been keen to drive home the advantage we’ve gained with a third year.

“Up to now, we’ve been growing spring wheat for the first two years, followed by spring oats for its exceptional weed competitiveness and as a cereal break before the land goes back into winter wheat in our main rotation.

“Extra crop storage and drying capacity on the farm, though, means now we’re switching from spring wheat to spring barley. It’s much more competitive than the wheat, will cope better with later drilling and, importantly, won’t give us ergot problems.

“Spring wheat has done us very well, with Mulika yielding up to 8.5 t/ha. While we’re still getting a very acceptable 7 t/ha or so, yields seem to be dropping off and ergot has certainly been on the increase – especially where we haven’t been able to drill until early April. At the same time, we want to take advantage of modern spring barleys like Explorer and RGT Planet that are better suited to heavier ground than traditional varieties.”

Cover crops have been found to make relatively little direct contribution to black-grass control at Revesby Farms – either in extensive Agrii trialling or in wider practice. In most cases, they have yet to give a big uplift to subsequent crop yields. They have definitely added to the workload. And, contrary to popular wisdom, they have not significantly improved soil structure by themselves, either.

They have, however, become an essential element of spring cropping – in the main rotation as well as in the emergency programme – for their value in maintaining soil structure and ensuring reliable crop establishment.

“More than anything else, our success with spring cropping depends on establishment,” said Peter Cartwright.  “Which, in turn, mainly depends on soil condition.  We’ve found cover mixes really useful in preserving soil structure through the winter and helping our spring crops off to the best possible start. Providing we make sure we correct any underlying issues of drainage, compaction and nutrition first, that is.

“As well as employing them ahead of all our spring crops, we’re also looking to put covers in after oilseed rape and before winter wheat. We see them very much as a long-term investment to building greater resilience into our soils.

“Depending on the following crop, we currently favour combinations of spring oats, phacelia, buckwheat, vetches and forage peas. But we know we’ve a huge amount still to learn about the whole business – not least, which mixtures are best for what conditions, when and how best to sow them and when to destroy them ahead of drilling. So, our views will almost certainly change as we learn more and more through our extensive Agrii trialling.

“We’re building on this experience with Steve Corbett and the R&D team to investigate possibilities for continuous companion cropping throughout our main rotation, using white clover in particular as a weed suppressant.

“Together, we’re also looking at recipes for improving spring oat agronomy, using forage rye for AD as an extra element in our emergency black-grass programme, and introducing our own version of Controlled Traffic Farming to further improve soil structure and resilience..”

A particularly interesting opportunity currently being explored at Revesby across a 14 ha field of spring wheat is the use of satellite NDVI imagery to map black-grass patches, overlay these onto SoilQuest management zones and employ variable rate sowing as well as P&K applications for the most sustainable grassweed management.

Last season’s trials showed that increasing spring wheat sowing rates to 500 and 750 seeds/m2 had valuable black-grass control benefits in the absence of all pre-ems – and without jeopardising crop standing. Following on from this, the 2017 study automatically varied sowing rates between 250 and 750 seeds/m2 across the field by soil type and black-grass infestation levels to examine the value of precision agronomy in taking the most economic advantage of this opportunity.

“Using extra seed rather than agrochemicals to improve our black-grass control in our spring cropping may not reduce our overall costs,” observed Peter Cartwright. “But it would still be very welcome in allowing us to preserve the activity of the chemistry we have in the face of growing resistance so we can continue making the most effective use of it in our winter wheat.

“Having two separate seed hoppers in our new drill means we now have the possibility of automatically varying the variety we drill as well as the rate at which we drill across our fields. So we could sow the most competitive winter wheat variety where it’s most needed and the highest output variety otherwise – providing they have similar markets and heading dates, of course. Josh Murphy and I will be having an initial look at this in the coming season, along with other ways of making the most of SoilQuest-based precision agronomy.

“Variable rate PGR and fungicide spraying are things we’re also keen to explore together as soon as we’re confident enough in the technology,” he added.

“While I believe we’ve developed a reasonable recipe for managing black-grass here, we can’t afford to rest on our laurels,” concluded Peter Cartwright. “After all, we know the weed will adapt and we have to keep ahead of it. We also know we need to remove as much weather-risk as we can from our cropping system for the greatest year-to-year resilience. And we want to continue improving our whole farm performance while controlling costs.

“We have a host of exciting technologies at our disposal to do just this today. Our team’s priority, though, is to establish which will offer us the greatest advantages and then employ them as cost-effectively as possible to deliver the goods.”