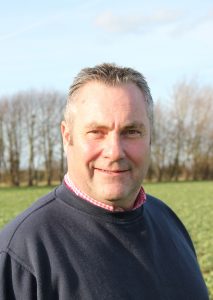 At Grove End Farm, Philip Bartholomew and his Agrii agronomist, Nick McMullon are applying the key elements of the Stow Longa black-grass management recipe. They’re also undertaking a series of trials with the Technology Centre’s research team. Yet they’ve never had a problem with the weed.

Instead, they’re addressing a far greater threat to the 135 ha arable business on the site of the old Kent Farm Institute at Tunstall near Sittingbourne – Italian ryegrass.

In addition to spreading far more rapidly than black-grass, Italian ryegrass is known to be around twice as competitive, making effective early control even more vital.  As if this wasn’t enough, the Grove End Farm population is developing resistance to all the most effective post-em herbicide options.

Last spring, indeed, infestations were so bad in parts of two fields that 15% of the farm’s milling wheat crop had to be destroyed with Roundup to prevent the ryegrass seeding.

“It was a nightmare,” explained Philip who share-farms the land alongside a substantial agricultural contracting, plant hire and haulage business. “We had to bite the bullet and spray-off the worst-affected areas because it was hard to see the wheat for the ryegrass in places.

“What makes things worse is that we’d always prided ourselves in keeping our clay loam ground very clean, preventing problem weeds like black-grass gaining any sort of foothold by scrupulous attention to machinery hygiene in particular.

“Until 2010, that was, when we pulled out five-years of ELS buffer strips that were causing us serious headaches with local dog-walkers.  Since then increasing amounts of ryegrass have been coming in from the field edges every year, reaching crisis point in 2015/16 when the weather really got in the way of our post-em spraying.”

As a direct result, the wheat herbicide bill at Grove End Farm has escalated from a modest £25/ha for a simple flucenacet/DFF pre-em followed by a spring SU tidy-up to around £120/ha for a robust stacked pre-em, peri-em and early post-em programme. And even this has had to be followed-up with a spring application of pinoxaden this season to deal with significant ryegrass bounce-back.

“With our most recent testing showing early indications of resistance to Axial as well as both Broadway Star and Atlantis, we’re fast running out of chemical control options,” pointed out Nick McMullon. “So, just like black-grass, we’ve got to get the right cultural controls in place very rapidly if wheat is to continue to be a viable here.  The question is exactly what controls will be best.

“Behaviourally, Italian ryegrass is very similar to black-grass. Over 90% typically emerges before December. It can persist in the soil for a good five years. And it will not emerge from seeds buried at reasonable depth. This means a well-proven Stow Longa recipe of delayed wheat drilling or spring cropping, rotational ploughing and minimum soil disturbance at drilling should be effective.

Putting Controls to the Test 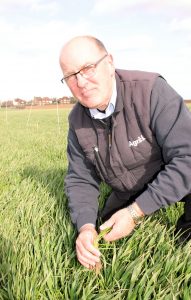 “The only way to be sure, though, is to try it out. Which is exactly what we’re doing, supported by integrated sowing date, cultivation system and herbicide regime trials run by the Agrii research team in both the milling wheat at the heart of our rotation and the spring barley we’re growing for the first time this season.”

Initial results from the winter wheat trials show a ryegrass population of almost 250 plants/m2 in the untreated field plots. Control from the farm standard establishment practice of discaerator cultivation immediately after harvest, a single glyphosate spray and a further cultivation pass ahead of power harrow drilling in late September averaged 55%, varying from 23% with a simple pre-em only regime to 91% with the best pre-em/peri-em/post-em combination.

In complete contrast, an identical initial cultivation and glyphosate regime followed by minimal disturbance drilling on the same date gave in excess of 99% control with every herbicide regime.

“This has underlined how important it is to either delay drilling sufficiently or, if we can’t take this risk, to wake-up the least amount of ryegrass seed just ahead of and at planting,” said Nick McMullon.

“We’ve still been able to achieve a high degree of control where we did neither. But only from the most robust chemical regime and in a season in which we achieved reasonable residual activity.

This is simply too high a risk – not to mention cost – for us. Especially so with the increasing level of herbicide resistance we’re encountering here.

“It will be very revealing to see the yields and margins  from the various treatments after harvest.

“Equally interesting will be the results of the parallel trials being run by the Stow Longa team with different varieties, seed rates and establishment regimes in the field of spring barley we’ve put in following one of the wheat crops we had to partially spray-off last year.

“Despite this, a further two autumn applications of glyphosate and ploughing, we had to go in with another dose of glyphosate ahead of our spring drilling to deal with continually emerging ryegrass in the worst areas. With the sort of warm winters we’re getting these days, this suggests the weed may not necessarily always follow its classic autumn emergence pattern.” 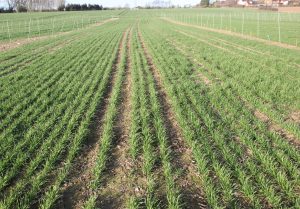 So, how is their recent experience and early trial evidence informing the Philip and Nick’s approach to managing the ryegrass that has become Grove End Farm’s Number One problem?

While they appreciate the value of delaying wheat drilling, the risk of doing so on heavy ground that can rapidly become impossible to work in the wet is considered too high. Nor has winter barley ever done well on the farm. So replacing September-sown wheat with the more competitive cereal is also unattractive. This makes the alternatives of reduced cultivation and spring cropping all the more important.

“Following the success of the black-grass work at Stow Longa, we see spring barley as an important part of our solution,” said Philip Bartholomew. “We’d never have considered the crop here five years ago. However, we’ve brought in a good 8.5t/ha from it on ground we rent nearby so we know we can grow it.

“Although we’re not in right area for an Explorer contract that would have been ideal, we do have good local markets for high nitrogen malting grain as well as straw for livestock feeding. So, this season we’ve drilled 30 ha of Propino together with a small amount of Vertigo spring beans alongside our autumn mainstays of Skyfall milling wheat and Elgar oilseed rape.

“Our own Agrii trials have been a real eye-opener as far as direct drilling is concerned,” he added. “We had a Bettinson DD ages ago but, like many, went back to ploughing. We’ve reduced tillage progressively since then and today’s no-till drills look like a different proposition entirely. They cultivate the slot well without smearing and close it effectively around the seed. The fact that they leave the rest of the soil undisturbed really cuts down on all-important weed emergence in the seedbed.

“Depending on how the trials yield, we plan to use a contractor to direct drill much of our wheat in the future. We may even look to direct drill our oilseed rape following the spring barley.

“Speaking of which, more rape is another thing we’re actively considering. We’ve brought in up to 5t/ha in the past and, fingers crossed, we’ve yet to encounter much in the way of flea beetle problems. At the same time, it invariably gives us good grass weed control.

“With rapeseed margins looking good against second and subsequent wheats we could well switch from OSR every four years as our main break for consecutive wheats to a three-year rotation of rape, wheat and spring barley. Whatever we do, though, we’ll be building as much flexibility into our system as we can. And ryegrass control will be the imperative driving all our decision-making.

“We may have been able avoid black-grass problems here so far but the ryegrass we have is at least as big a threat, if not greater,” concluded Philip.  “With the best research-based support, we simply have to keep on top of it if our arable business is to continue to be sustainable in the years ahead.”