In 2012 Agrii agronomists Tom Goodman and Todd Jex’s achieved wheat yields of 12.7t/ha from the Best of British Wheat challenge crop of KWS Santiago they grew on Stephen Moore’s Manor Farm, Stapleford near Salisbury. The achievement is even greater coming from thin chalk ground in a low yielding year. However, they were a little disappointed as they really wanted to produce 15 t/ha!

Yes, the very wet season did favour light land. And the crop only extended to three quarters of an acre as a field-scale trial. However,it out-performed all but three of the 1230-plus 2012 small Recommended List variety plots across the UK

More importantly, it yielded almost 2t/ha more than an identical area of the same variety grown alongside it to a current Top 25% agronomic standard, delivering a very welcome extra gross margin of more than£85/ha.

Harnessing the best of current agronomy 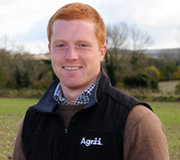 “Perhaps the most important thing we did was set the bar high,” explains Tom Goodman. “Our aim was to harness the best of current agronomy to produce 15 t/ha from far from ideal wheat ground.We planned and managed the crop with as much precision as we could to do just this.

“We didn’t stint on the inputs. At the same time, though, everything we did was prescriptive. We only applied what modern agronomic science told us was needed. We employed only the equipment and facilities available on the farm. And we were as constrained in our spray timings as everyone else by the weather.” 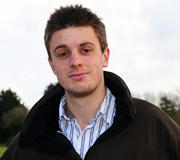 “With exactly the same sowing rates, seed treatments, herbicide and insecticide inputs, variable costs were £300/ha higher for our challenge crop,” Todd Jex reports. “The extra
1.9 t/ha we harvested at a virtually identical bushel weight meant a £86/ha gross margin advantage at a feed wheat price of £200/t. And this without taking any account of its 12.8% protein analysis compared to 10.7% from the standard regime.”

“Our fertilisation and PGR regime produced visibly different crop architecture,” points out Todd. “Despite having a lot more N, the challenge crop was noticeably shorter than the standard with no hint of lodging. It also had markedly longer ears as well as more of them.

“Critically too, we recorded major differences in green leaf retention. While 80% of Leaf 3 and 15% of Leaf 2 were lost to disease by the end of June in the standard regime, our challenge crop lost just 8% and 0% respectively.

“The lack of sunshine prevented us hitting our 15 t/ha target. But the performance we achieved really underlines the value of setting-up wheat yield with the best possible nutrition and canopy management,then maintaining the greatest photosynthetic capacity through to maturity whatever the weather,” he stresses.

“Our challenge recipe certainly isn’t for everyone,” accepts Tom Goodman. “Even in one of the worst wheat years in recent memory, though, it shows what can be achieved under farm conditions with the best possible agronomic attention. There’s no single magic ingredient. Just like the British cycling team, it’s all about doing everything that little bit better.”

Farmer Stephen Moore and his family, client’s of Agrii for 40 years, said: “The challenge crop always looked much better than the standard. It stayed far greener and, despite the extra N, was noticeably shorter. It was the last crop we combined and I have to say it was a bright spot in one of the worst harvests we’ve had in recent years. I’m sure it would have done 15t in almost any other year.

How they did it: