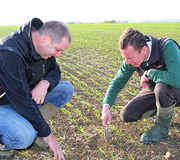 Agrii agronomist, Chris Letts has worked hard with grower, Nick How over the past three seasons to bring extensive Stow Longa black-grass technology centre research findings to bear on a serious black-grass problem.

Central to their thoroughly integrated approach is a second-hand plough bought in 2012 – 10 years after the last one was sold in a permanent switch to minimum tillage. Costing £2000, the five furrow reversible Gregoire Besson is one of the least expensive pieces of kit on the farm. And it took five days to plough a 100 acre field previously tackled with a Discordon in no more than one.

However, combined with an intensive cultural control programme of stale seedbed management, delayed drilling and spring cropping, the investment has proved a real life-saver in getting to grips with the farm’s black-grass problems.

“We always got good results from min-till across our wheat/wheat/rape rotation and it continues to be the mainstay of our establishment regime,” Nick How explains. “Of course, we’d had issues with black-grass. But until the autumn of 2011 we’d been able to deal with them without too much trouble, bringing in a healthy 9 t/ha-plus five year average from our feed wheats.

“All our first wheats were drilled in early September and going into the third week of the month the 100 acres right outside the house looked fantastic. Then suddenly there was black-grass everywhere. We threw everything at it but without success, harvesting a meagre 7t/ha in 2012.

“That was when we decided we had to act. Thankfully, being just down the road from Agrii’s Stow Longa black-grass technology centre we had the best possible research experience right on our doorstep. It was really heartening to see how effective rotational ploughing could be as a ‘get out of jail’ card. However, I had to summon up all my best- remembered ploughing practice to be sure of burying the black-grass seed consistently across the whole field.”

The field in question was destined to go into second wheat ahead of oilseed rape, but under the atrocious conditions of the 2012 winter only half actually did. And then not until the first week in November (and only because ploughing allowed it where top down working was impossible). The remaining 50 acres was put into spring oats for nearby horse feed specialist, Dodson & Horrell.

“As Nick had been min-tilling for so long, his ploughing buried the worst of the weed seed burden from the previous season well out of the germination zone,” Chris Letts points out. “Even so, based on our years of experience at Stow Longa, we backed this up with several cycles of stale seedbed glyphosate ahead of significantly delayed drilling.

“We got in two rounds of good pre-planting control before the second wheat, followed by a pre-em mix of flufenacet, pendimethalin and prosulfocarb. After an anxious month, we were relieved to find no black-grass at all in the crop so we didn’t bother with any autumn post-em. The proof of the pudding came in a yield of 9 t/ha – fully 2 t ahead of the previous year’s first wheat.

“An extra glyphosate hit ahead of drilling the oats in early March and the smothering abilities of a crop that flew away despite the late spring proved equally effective in black-grass control. We harvested an encouraging 7.4 t/ha to deliver a good second wheat level margin.

“The rape came off nice and early, allowing us set up the ground and get in two rounds of stale seedbed glyphosate ahead of this year’s first wheat, which we deliberately delayed drilling until the first week of October. Going into drilling the seedbed was clean as a whistle. Even so, we’ve put in KWS Santiago – for the competitiveness it has shown in Stow Longa trials as well as its excellent performance here last harvest. We also used at a higher than normal 350 seeds/m2 rate and supported it with a flufenacet plus pendimethalin pre-em.”

The experience of the past three seasons at Mill View Farm has really shown the value of the thoroughly integrated black-grass control recipe which Nick How and Chris Letts are keen to maintain across the business to ensure the weed never again leaps up and bites them.

Last autumn the rotational plough was put into another 150 acres and this autumn a further 50 acres. While they don’t plan on ploughing any more ground in the coming year, they will certainly do so wherever and if ever a serious weed problem becomes apparent. But, to avoid bringing-up previously buried seed, never more than once every five years.

Equally, they’ve upped the spring oat area to 90 acres this season, half of which is being preceded with a cover crop of oats, radish and mustard as a trial to assess its value in building soil structure and providing extra weed competition. And from this year onwards they aren’t drilling any winter wheat before October. 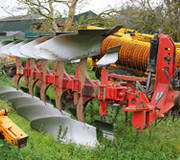 “We had some perfect sowing conditions this September but it hasn’t been painful holding off on the wheat drilling at all,” stressed Nick Nowe. “We have, however, replaced our trailed 4m drill with a 6m mounted Weaving Sabretine. October is not a good month to be dragging a heavy trailed drill round our headlands, in particular. And the drill gives us the added advantage of heavy duty, low disturbance tines that are equally at home on the plough, in min-tilled ground or direct drilling.

“We drilled all our winter OSR comfortably in a single week with the new drill this season and it sailed through our wheat drilling just ahead of the early October rain too, giving us the confidence to leave plenty enough time for stubble weed control as a matter of course these days.

“The real proof will come in our first wheat performance next harvest from the 100 acres of nightmare black-grass ground that prompted us to act back in 2012,” he concluded. “While I have every confidence we’re now out of the woods, the last thing I ever want to be again is complacent about this particular challenge. With the amount of seeds it sheds, a small amount of black-grass can become a major problem in the blink of an eye.”