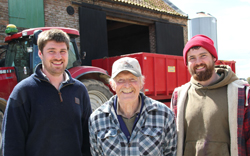 More of the same is not an option for the Shelby family’s 380 ha mixed livestock and arable business at Benningholme Grange Farm to the northeast of Hull in the heart of Holderness. Not least with the headache of difficult black-grass, the challenge of difficult ‘carr’ land and increasingly unpredictable seasons and markets.

Instead, Guy Shelby, his father Chris and brother David have been working closely with their Agrii team to successfully drive fundamental arable change across their Crown Estate tenancy; a forward-thinking and enthusiastic commitment that has been recognised nationally with the Arable Farmer of the Year title in the 2016 Farmers Weekly Awards.

Amongst other developments at Benningholme Grange, precision agronomy is ensuring increasingly well-targeted and cost-effective input use; strip tillage is transforming establishment and dramatically reducing fixed costs; greater reliance on spring cropping and better all-round variety choice is adding invaluable agronomic and marketing flexibility; and introducing fodder catch crops and grass into the rotation is aiding the battle against black-grass.

“Plenty of organic matter courtesy of our 1500 bacon pigs and expanding 320-ewe sheep flock means our land can be very productive,” insisted Guy. “But most lies at or below sea level; its glacial clay includes sandy, loamy and peaty areas; every field has wet holes that can be almost impossible to crop; and none of the ‘carr’ can be drilled late in the autumn or grow second wheat.

“Add in difficult black-grass in many places and our challenges mean it simply wouldn’t be sustainable to stick with blanket P&K applications and seed rates, expensive and inflexible plough and power harrow establishment, ‘all from the can’ crop protection or a firmly feed-quality winter cereal-based rotation. Especially so, with such uncertainty over commodity prices, not to mention agricultural support.” 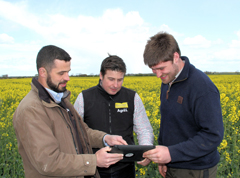 Working with Agrii agronomist, Billy Hosdell, Guy had the whole farm SoilQuest conductivity scanned, sampled and mapped in the autumn of 2012. Unimpressed with the grid-based sampling approach of others, he initially had two fields scanned in 2010. The fact that the resulting maps exactly matched his father’s experience with the land clearly confirmed the system’s worth.

“Variable application to the SoilQuest zones saved a good 20 tonnes of P&K in the first year alone,” reported Billy. “It also persuaded the family to concentrate pig muck applications on land further away from the farm rather than continuing with the traditional, convenience-driven short-haul option. And, using the mapping, we’ve recently been able to justify a valuable cost-saving P&K holiday for 40% of the land.

“Guy and I experimented with variable sowing in 2013. By adjusting wheat seed rates up and down by 10% we were able to get exactly the same plant counts across the difficult heavy parts of one field as we did across its sandy areas. Needing no further convincing, we’ve been drilling all our seed at variable rates ever since.

“Even winter OSR drilled down to 40 seeds/m2 in places and well into September established strongly, developed an impressively well-structured and even stand, and went on to deliver over 5t/ha in 2015,” he pointed out.

As least as much credit for the noticeably more consistent establishment now being achieving across Benningholme Grange has to go to the Mzuri Pro-Til 3T drill Guy acquired after much investigation in 2013.

Specifically designed as a single pass drill, its combination of front tine to till a strip of soil into which fertiliser is placed, staggered wheels to remove air pockets and reconsolidate the tilled strip, and individually-adjusted coulter and press wheel seeding units has delivered just the right combination of moisture retention, seed-to-soil contact and depth control.

Its versatility to drill into min-tilled or ploughed ground as well as direct into stubbles is also giving the Shelbys the flexibility they need for a management approach that can be adapted to suit whatever the weather throws at them as well as their black-grass issues.

“We’ve worked with Martin Lole and Will Davies of Mzuri to develop the machine to really meet our needs,” stressed Guy. “Purpose-built for heavy clay, it puts the starter fertiliser in exactly the right place and delivers the goods in super emergence across all our crops. With a slug pelleter mounted on the drill, we have a true single pass recipe for rape which is far better than the subsoiler system we were originally playing around with.

“As well as restricting black-grass germination, retaining moisture and encouraging worm activity and soil structure by leaving undisturbed crop residues on the surface between sub-surface tilled rows, strip tillage has enabled us to halve our wheat establishment costs,” he added. “What’s more, we’re now consistently able to target a good 12t/ha from our first wheats.

Alongside the tillage switch, the Shelbys moved to chopping and spreading rather than baling all their wheat straw. With extra worm activity from lower disturbance crop establishment and better-targeted muck applications, this is helping open out and improve soil structure across the farm.

Straw raking ahead of drilling has proved an excellent way of killing the slugs that cause such problems after oilseed rape and encouraging black-grass germination for pre-planting Roundup. Where black-grass is particularly troublesome priority is given to as many rakings and sprays as possible ahead of planting; wheat varieties Agrii research shows to be especially competitive; later drilling; higher seed rates; and, spring cropping.

Until recently the vast majority of the farm’s cereals were winter-sown barn fillers. But over the past three seasons increasing amounts of spring wheat and more recently spring barley have been introduced to help combat black-grass and spread both workloads and business risk. With the assistance of Agrii seed specialist, Matt Richardson too, the businesses is increasingly now growing for added-value markets.

“Wherever black-grass is manageable we’re continuing to sow from mid-September,” said Matt. “From old favourites, Grafton and JB Diego, we’ve moved on to a combination of Skyfall, KWS Lili and KWS Siskin for the productivity and particular septoria-resistance they’ve shown in our national variety trials and at the local Danthorpe iFarm.

“Where second wheat can be grown, world-record holding Dickens is our first choice. It has proved very competitive in Stow Longa trials and is well-suited to late drilling.

“Later autumn drilling isn’t possible on a lot of the ground. So where we need to hold back for extra black-grass control we’ve decided we might as well do so until March and go for a spring crop. We started off growing Mulika on a Glencore contract and, although it made full spec in 2015, the crop only averaged around 8t/ha.

“With spring barley alongside it doing over 8.6 t/ha, earning better margins and offering greater sowing flexibility, this has become our preferred spring cereal,” he explained. “Last year’s RGT Planet didn’t go in until May 5 because of the weather. Yet it still delivered 8t/ha of malting quality grain, earning it pride of place in our 2016/17 spring cereal plans.”

Earning better margins than second wheat, winter OSR remains an important cereal break at Benningholme Grange.  As much of it doesn’t go in until mid-September after spring barley, the team are growing vigorous hybrids, DK Exalte and DK Expower, together with a small amount of the Clearfield variety, DK Imperial CL on land with a bad runch problem.

Pulses provide a valuable rotational reset, not least as a one in six year opportunity to plough as an extra aid to black-grass control. The traditional vining pea acreage has been reduced to around  25 ha, with blues peas and more recently spring beans – which yielded an impressive 7.5t/ha in 2015 – added to improve flexibility and spread risk.

Alongside these crops, the Shelbys have been integrating forage into the rotation over the past two years to improve soil structure and black-grass control as well as to support a virtual tripling of the Lleyn-cross ewe flock and a new indoor beef finishing enterprise run by David.

Replacing a failed 10 ha of winter rape with a mixture of spring-sown stubble turnips, fodder rape and Italian ryegrass provided valuable grazing for weaned lambs last summer. This season a mustard cover crop ahead of spring barley has given useful extra winter fodder for the ewes. And around 12 ha of three year grass leys have been introduced on the ‘carr’ land to silage for the beef finishers. 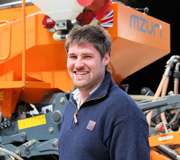 “We’re really being able to get on top of black-grass now,” pointed out Guy Shelby. “Stacking cultural controls like variety selection, variable seed rates, late-drilling and cover and spring cropping with the most effective chemistry means we’ve cut the 300 plants/m2 black-grass population in our most troublesome ground down to a perfectly rougable level.

“As we move ahead, rotating the grass leys strategically around the arable ground should really help keep on top of the grass weed problem as well as improving the functioning of our soils and building organic matter levels.

“We need to change to be sustainable here,” he concluded.  “Working closely with Billy and Matt, we’re concentrating on building the greatest possible resilience into our arable regime – and, indeed, into our farming business as a whole.

“I have no doubt that the changes we’re continuing to make and the much more flexible approach we’re taking to what we grow and where and when we grow it – depending on changing conditions, threats and opportunities – will stand us in good stead in an increasingly uncertain world.

“Times may be especially challenging. But the challenge of change is really exciting for us all as we harness the best available intelligence and technologies to make the most of every season.”