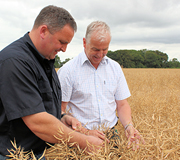 Telford-based Agrii agronomist, Peter Jones has worked with manager, Simon Collins and his Chillington Estate team near Wolverhampton to overcome a number of typically West Midlands mixed farming barriers to oilseed rape performance over the past six years.

By focussing their improvement attention firmly on crop establishment through better soil management, timeliness and precision, they are pushing yields across their 120 hectares of winter OSR from an historic 2.5 t/hectare or less to 4 tonnes and beyond on a consistent, whole farm basis.

What’s more, the estate – which is running a unique field-scale Agrii study of OSR performance from seven separate commercial establishment systems in 2014/15 – is planning a whole host of further improvements to build still further on the achievements to date. 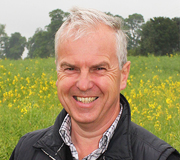 “What is needed more than anything else is a faster establishment system that combines the sub-soiling we now insist upon before rape with sort of quality seedbeds we currently get from the plough and power harrow/drill combination,” Peter Jones explains.

“We have to get the winter OSR off to the best possible start to give it enough of an edge over an abundance of game birds and pigeons, courtesy of well over 800 acres of woodland criss-crossing the 1200 acre arable area.”

“But this has always been challenging. The rape has to go in after wheat in the four year arable rotation as the barley ground grows stubble turnips for the 1500-ewe lamb enterprise. Add to this the fact that all the straw is baled, so early drilling is out. Equally, the largest field is 28 acres which means drilling can’t be nearly as fast as those with wide open arable spaces. And soils varying from pot clay to blow-away sand don’t help either.” 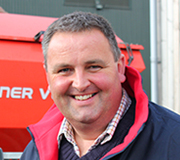 Central to the winter OSR improvements being made at Chillington is a far better understanding of the estate’s soils. Much of the land is decidedly hungry, the estate doesn’t have access to useful supplies of FYM and baling all the straw presents a further challenge to organic matter as well as potash levels.

Perhaps the biggest soil-based obstacle to oilseed rape performance initially identified by Simon Collins and Peter Jones was serious compaction built-up over the years on the sandy ground, in particular. This was overcome by introducing sub-soiling into the rotation as a routine ahead of every OSR crop despite the extra time pressures it placed on establishment.

Since then SoilQuest scanning has revealed the true extent of the variation in the estate’s glacial deposit soils. Each 20-25 acre field, for instance, typically has four or five different soil types with pHs down to well below 6.0, and TSP recommendations varying from zero to 145 kg/ha. This makes the variable rate P, K and lime applications – which have now also become a matter of course – especially valuable.

“The vigorous, fast-developing hybrids like DK ExPower we’ve switched to growing are an immense improvement on the pure lines of the past,” stresses Peter Jones. “Now we have the varieties with early get-up-and-go we need, varying their sowing rate to individual SoilQuest management zones should really help us achieve the 20-25 plants/m2 we’re after with far greater consistency and less risk across every part of every field.

“Varying the nitrogen we apply should also give useful advantages in securing the even, well-branched canopies we want from modest annual nitrogen applications of 150-160 kg//ha. In so many ways, precision agronomy looks like being a real game-changer here.”

All the ingredients really came together well with winter rape at Chillington in 2013/14, allowing the crop to take full advantage of favourable growing conditions to break all performance records.

Even so, following particular success with the alternative in 2012/13, Simon and Peter have given added a valuable extra string to the estate’s bow by introducing spring rape into the rotation – as a permanent fixture for the most difficult fields and a fall-back for any that can’t reasonably be drilled in a difficult autumn. That way they hope they’ll never have to face what used to be the regular task of ripping out winter rape through poor establishment.

“With Peter’s help and Agrii’s technical resources, we’re making winter rape establishment so much better and more reliable these days,” said Simon Collins. “And the right one-pass system should enable us to improve performance and reduce risks still further. But, should the weather turn against us or we run out of time, we’ll just stop drilling and leave things for the spring rather than muddling-in the crop more in hope than anything else.”