That means boosting grass growth rates, and as importantly mitigating against further periods of stress caused by dry weather could be valuable in the next month, suggests Ben Lowe, Agrii’s national forage product manager.

“The weather we’ve had has stagnated the progression of first cuts, multi-cut silage systems and regrowth in grazing rotations – it’s what we can do to help shoulder any future stress points,” he says.

Initial trials with biostimulants, such as the plant-based amino acid containing PhysioCrop, suggest they could play a role in reducing stress, particularly drought, by helping encourage plants to produce increased quantities of photosynthetic pigments, such as chlorophyll and carotenoids. These reduce stress in the plant and promote growth, Mr Lowe says.

Replicated trials were carried out at one of Agrii’s Green Horizon network farms in Ludchurch, Pembrokeshire this spring. Green Horizons is a five-point plan to help farmers prepare for the challenges of tomorrow, while ensuring agriculture remains sustainable and profitable.

One of the core Green Horizons objectives is to investigate integrated whole farm solutions, including biosolutions such as PhysioCrop, says Mr Lowe.

In these trials applying PhysioCrop with the growth promoting gibberellic acid-containing product SmartGrass produced an extra 2,350 kg/ha of first cut grass compared with the control on a new cut Master Ley sown last August highlighting how biostimulants can be a benefit in higher stress conditions, says Dai Llewellyn, the Agrii agronomist in charge of the trials. 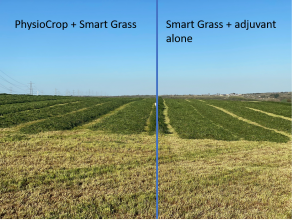 Where SmartGrass was used alone without the PhysioCrop the improvement in grass yield over the control was around 1,000kg/ha, he adds. SmartGrass can only be used once in a season and not after 30 April.

The harvested plots measuring 150m by 23m, and repeated four times in the field, were weighed over a weighbridge.

“In a very cold dry spring we have seen the benefits of adding SmartGrass to grass to increase yield. The addition of PhysioCrop also made a big difference, which was not a surprise after a small trial with another biostimulant last year also showed improved yields in dry stressful conditions. 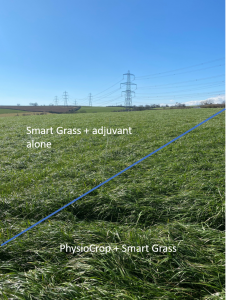 “Over half of the yield increase came from the use of the biostimulant so I think any time it’s dry in the summer, and you can get it on before, I think you would see a response,” says Mr Llewellyn.

Responses are likely to be greatest in intensively managed leys, he adds. A similar trial on the farm in a five-years old Wynnstay imperial ley showed a similar yield response to SmartGrass with a smaller uplift from the PhysioCrop.

The two trials also highlighted the difference in total grass production between new and older leys, he says. “Our new leys compared with the older ones on the farm are producing nearly 50% more grass.”

Reseeding could be worth grassland managers considering for future seasons to help mitigate against forage shortages, given the cooler and / or drier springs we seem to be having, says Mr Lowe.

“There’s also the potential to adapt ley mixture choices to the soil and field conditions. For example, if you know an area always suffers in drought conditions, perhaps consider seeding that part of the field with a festolium species mix, which with its deeper rooting can handle stress better.”