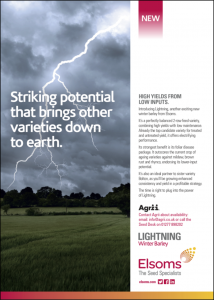 Lightning is a new 2-row conventional winter feed barley from breeder Elsoms Seeds, which gave high yields (101% treated, 86 untreated) in Agrii’s trials in 2021. It performs well across heavy and lighter soil types and is suitable for all regions of the UK. It has the best mildew (7) resistance of any variety on the list.

Lincolnshire grower Tim Booth who farms near Swineshead, was rewarded with a yield of just over 8.6t/ha in 2021 from a crop of Lightning. “It’s our first-time growing winter barley as historically, it’s been tricky to fit into our rotation.” Says Tim. “However, we changed things up last autumn, drilled 17ha and were rewarded with a fantastic looking crop that had no disease issues.”

With a solid reputation as being one of the best entries for oilseed rape, winter barley still merits serious consideration in future rotations says John Miles, Agrii Seed Technical Manager. “Winter barley still has a massive role to play in propping up the current rape area. Given the high prices achievable for OSR crops right now, growers would be wise to focus on what proceeds rape in their rotations and there’s little doubt that winter barley, with its earlier harvest date, can often make a significant difference to yield potential for a following rape crop – particularly if the objective is achieving an early drilling slot for the rape.

“With a competitive cost of production relative to other crops, excellent net margins can be achieved on a 10t crop of winter barley, however it’s important to look closely at both untreated yield and the overall disease package when assessing variety selection.

“Of the new two-row winter barley entries on the 2022/23 recommended list (RL), Lightning has the highest untreated yield at 88 per cent and a strong overall disease profile.

Agreeing with John’s view on the current winter barley picture, Agrii colleague Rodger Shirreff, Seed Sales Manager for the north region, is positive about Lightning’s prospects following its recent arrival on the RL.  “Lightning looks to be very sustainable, with a solid all-round package and good standing ability” says Rodger. “Its strong disease scores could give it a performance edge over other two-row varieties and should allow for a more targeted approach on fungicide inputs. We trialled it independently during 2020 and 2021 and it performed consistently well across all regions. The relative earliness of the variety combined with its manageable disease profile plus the ability to produce a lot of straw should make it a popular choice.”

“Its bold grain should make it particularly attractive to both livestock farmers and the feed trade, and with a good bushel weight there is feed export potential” concludes Rodger.

For more information about Lightning, or to order, please contact your usual Agrii contact, email us at info@agrii.co.uk, or call our seed desk on 01277 898202. You can also view the full Lightning Agrii and AHDB data here.