Valuable Bio-alternative to multi-sites at T0

Two years of Green Horizon agronomy-trialling have highlighted a valuable biological T0 alternative to multi-site fungicides in the annual battle against Septoria, paving the way for the increasingly broad use of bio-controls in mainstream wheat disease management.

Already fully registered in the UK as a ‘plant defence natural stimulator for the control of a range of diseases in winter wheat’, the brown algae-derived elicitor, Iodus (laminarin) has been shown to reinforce cell walls and stimulate the production of fungal toxins and pathogenesis-related (PR) proteins to arrest the movement of Septoria tritici and mildew, in particular.

“In recent years we’ve tested almost 150 biological products in small plot trials with a success rate of just 15%. Amongst these, Iodus stands out for giving repeatable reductions in Septoria infections and useful wheat yield benefits.

“Dose-response work from SRUC shows an optimal application rate of 0.75 l/ha giving the same level of Septoria tritici control as a folpet at its standard 1 l/ha rate.

“As part of a T0 programme in our 2018 trials, this rate of Iodus delivered the same 0.5t/ha response as 1 l/ha of chlorothalonil. And across 27 of our own T0 trials and those of other independent organisations in 2019 and 2020 it gave an average yield benefit of 0.3t/ha (Figure) – almost identical to the 10-year average T0 response we see in our Septoria control work.” 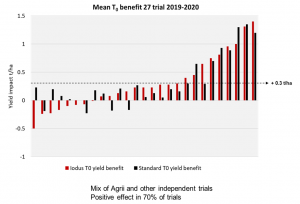 These results leave Clare Bend and her technical team confident that the bio-fungicide could help fill the early-season gap left by the withdrawal of chlorothalonil, helping to take the pressure-off Septoria actives through the most robust protective and anti-resistance strategies.

While it clearly has a place in Septoria control, they warn that the jury remains firmly out as far as rusts are concerned, making a rust-active partner essential for many at T0. All the more so with the much greater yield impact rusts can have; the particular susceptibility of so many of today’s varieties; the greater risk yellow rust represents for later drillings; and, the extent of rust infections evident across the east of the country this season.

“With so much more interest and investment, biologicals are really coming of age,” points out Ms Bend. “As well as protecting, enhancing or safening conventional chemistry, we see them being valuable in helping to offset the loss of actives and increasing restrictions on where and when they can be used. They should also help us in limiting the use of conventional chemistry, coping with increasing climatic uncertainties and minimising residues.

“Well-planned prevention with all the tools at our disposal is so much better than cure with diseases like Septoria and rusts, reducing the amount of chemistry needed and the growing risk of infections getting out of control. However, for the most consistent results bio-solutions, in particular, need to be employed in the right place at the right time and with the right partners as part of well-researched programmes. That is, after all, what IPM is all about.

“With its latest label timing of before GS31, Iodus fits the T0 slot perfectly,” she says.
“For Septoria we see it as an especially valuable alternative to folpet where pressure from the disease isn’t excessive – either with resistant varieties and later drilling in high Septoria risk areas, or with more susceptible varieties drilled in lower risk, dryer regions.

“Where Septoria risks are higher and wherever yellow rust is a risk, though, Iodus needs to be used alongside a good azole or azole/strobilurin mix. Post-epoxiconazole, we’ve been finding bromuconazole/tebuconazole co-formulations really good in Septoria-led situations. While not as strong on Septoria, the combination of cyproconazole and azoxystrobin is proving particularly powerful on the yellow rust front.

“Like Iodus, these azole options have a slightly different cross-resistance profile to either epoxiconazole or prothioconazole and fitting well as a precursor to our T1 preferences and maintaining our long-established anti-resistance strategy of mixed azole use.”