Trust the science with bio-stimulants

Bio-stimulants are gaining acceptance among growers as recognition of the role they play in promoting yields through greater nutrient uptake and improved plant health has led to a change in attitudes. This newfound appreciation owes much to the willingness of growers to test the products for themselves, but in many cases any scepticism is misplaced, says Nick Winmill, potato specialist with advisers Agrii. 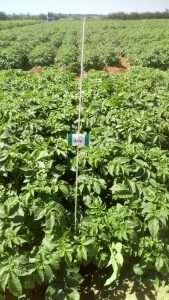 he distrust of the past is perhaps understandable given the many forms of bio-stimulant available and for which the benefits were not always clear. Overcoming this cynicism has taken time, but the development of better products and targeted trials intent on identifying when and how to best utilise their potential has brought commercial success.

“Despite the lack of information about some products, there are others which have had years of development,” explains Nick. “These are backed by several years of replicated trials and sound commercial use, showing exactly how they interact with the crop to support plant health and boost economic yield,” he adds.

One example of a product where advances in crop nutrition and years of replicated trials have fostered a change in attitudes is ProAct, a soluble bio-stimulant that promotes calcium and silicone absorption through increased concentrations of the Harpin Alpha-Beta (aβ) protein. In potato crops, ProAct has delivered yield increases of 0.76-2.1 t/ha depending on the variety grown and whether the crop received one or two applications.

“Harpins are a type of protein which function as elicitors, triggering the plant to activate key defensive and growth responses,” says Mr Winmill. “They are widespread and have demonstrable effects in a wide range of plants, including potatoes.”

Harpin αβ is a synthetic protein created from four different naturally occurring Harpin peptides in one molecule. It is produced by Plant Health Care and has been marketed as ProAct around the world for more than 15 years.

The Harpin αβ protein in ProAct works by activating the ethylene signalling pathway within the plant. “When plants detect the Harpin αβ molecule, a cascade of biochemical signals are triggered throughout the plant,” explains Dr Matthew Audley, technical sales manager for Plant Health Care in the UK. 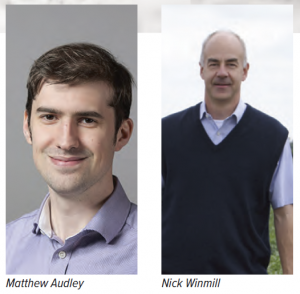 “These signals tell the plant to accelerate growth, increase nutrient uptake and distribution, and reinforce abiotic stress resistance capacity. The Harpin αβ protein rapidly degrades within hours and does not leave any residues, but its positive effects persist for weeks.”

“Calcium deficits have been linked to a higher incidence of tuber defects, such as internal rust spot and hollow heart, so boosting calcium assimilation can be beneficial,” explains Nick. “It also improves skin finish, which is important for packing crops.”

The benefit of ProAct in supporting calcium absorption was demonstrated in a trial undertaken by NIAB CUF in 2019. Tubers of ware crops were found to have a higher level of calcium when ProAct was applied in combination with Stopit fertiliser. The combination of the two was better than seen when either product was applied alone, and significantly higher (28%) than the untreated control.

Other trials have shown that the effect ProAct in supporting skin quality. A trial with Scotland’s Rural College (SRUC), found virtually no black leg in a highly susceptible variety when ProAct was applied on a weekly basis.

“Because ProAct works on the whole plant it can provide a number of benefits depending on how it is used during the growing season,” says Nick. “Trials by Staphyt in Poland in 2019 show that early applications can increase tuber numbers, while later applications boost tuber size and quality. Both approaches resulted in an improvement in marketable yield and, depending on variety and sale price, net margin benefits of up to £350/ha.” 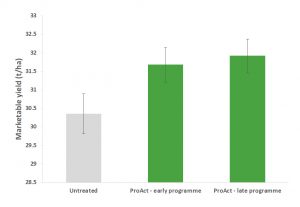 Trials in Poland showed an increase in marketable yield from using ProAct.

Thanks to the way that ProAct boosts the plant’s natural stress defences, treated crops show better resistance to diseases such as blackleg. “Initial work undertaken by Agrii and SRUC looked at the effect of treating seed crops of Rubesse with a number of products, and in the initial trial the ProAct treatment was the only one not to show any blackleg. A weekly spray programme of ProAct at 100 g/ha showed significantly less blackleg than other treatments in the trial,” says Nick. 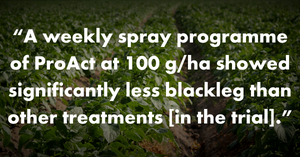 Such successes are no longer a rarity but understanding what the product can do and how it works, is fundamental to realising the economic benefits on offer.

“There is still an aura of ‘muck and magic’ about many bio-stimulant products,” admits Nick. “It is therefore important to choose those, like ProAct, which have demonstrable benefits, both in terms of how they interact with the crop, but also the extent of any economic returns through greater marketable yield and better crop quality.”