Oats are not barley. This is the fundamental essential those growing the increasingly popular crop this spring need to appreciate to get the most out of them, believes Agrii Innovation Crops manager, Skye Van Heyzen.

“Most people come to growing oats recognising their ability to take-off rapidly, scavenge nutrients well and compete with weeds better than any other spring cereal,” he points out. “But failure to understand their particular nutritional needs and growth and development pattern, amongst other things, can easily catch relatively new oat growers out.

“Our extensive experience with the crop in trials and commercial practice shows that tailoring oat agronomy more effectively to the crop’s key strengths and weaknesses can be worth at least £100/ha in extra margin.

“As a ‘white straw’ break crop, well-managed milling oats or naked oats should be delivering gross margins of £600/ha or more, making them very competitive with alternative break crop options. They are also better at dealing with difficult conditions than other spring cereals and have a lower input requirement. But to deliver the goods they simply must be managed for what they are – which is not barley.” 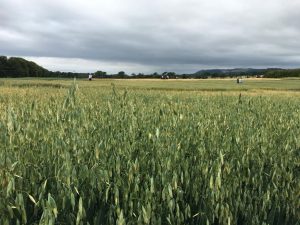 While oats have an excellent fibrous root structure and will put more emphasis than barley into rooting before shooting, Mr van Heyzen insists that starting with a good soil structure at establishment is crucial.

Oats tolerate cold better than most spring crops early on too, in his experience. This and the fact they need time to get their feet down before motoring away above ground means they are best sown from late February, optimally by mid-March and, wherever possible, before April. 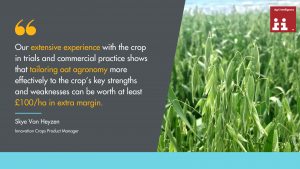 More susceptible than other cereals to Mn deficiency, they respond well to early manganese as well as zinc to kick-start them in many soils. Indeed, Agrii researchers have recorded an average four site response of 0.45t/ha to a combination of iMan (Mn) and Zax (Zn) technical seed treatments despite only one of the sites showing any signs of deficiency.

Available P, N and S is essential to get Oats up and running

“Spring oats need to pop-and-run,” says Mr van Heyzen. “Even more than barley, where nitrogen tends to be the primary consideration, oats need a good balance of N and P early on. So, fresh available phosphate alongside nitrogen and sulphur in the seedbed pays dividends. Potash and magnesium become more important for the second fertiliser split, alongside the rest of a typical total of around 90-110 kg N/ha, depending on soil availability.

“Our best results always come from a balanced nutritional approach, matching applications carefully to soil nutrient availability as much as content. This makes a good broad-spectrum soil analysis essential. 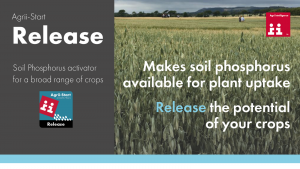 “Because oats ripen from the top down, it’s important additional nitrogen or other nutrients aren’t applied too late,” he adds. “Doing so will only keep the straw greener for longer, delaying harvesting and making the crop more vulnerable to late-season problems.”

Mr van Heyzen explains that oats are have shown themselves to be much more competitive against grassweeds than wheat or barley in all the company’s Stow Longa blackgrass research. However, he stresses that they need to establish well to be so. Add the relative lack of graminicide options and the importance of good clean pre-planting control and minimal soil movement at drilling to avoid waking-up weed seeds becomes clear.

As there is no current need to fight resistance in either of the two key oat diseases – mildew and crown rust, he sees a standard two-spray fungicide programme as quite sufficient in most cases, married to an appropriate PGR regime.

“Flat oats are the very last thing you want,” he insists. “And dulling-on-the-grain which occurs with brackling or lodging will compromise quality. With softer leaves than wheat or barley, oats are very sensitive to PGRs in dry conditions. Under these circumstances, I always recommend split applications for the greatest possible flexibility in matching growth regulation to variety, sowing date, crop growth and, crucially, the weather. 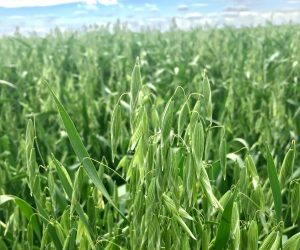 “For the best results, it’s equally important to harvest oats promptly, accepting a natural level of greenness in the stem if you need to. Leave the crop too long and you risk losing grain on the floor, grain quality or both.

“The UK milling oat market continues to grow, with considerable potential for replacing imports,” concludes Mr van Heyzen. “Alongside this and a growing interest in the crop both as a wheat break and as part of an integrated black-grass management strategy, we are seeing encouragingly greater investment and progress in oat breeding these days.

“Whether covered or naked, spring oats have a great rotational fit. But if you’re going to grow oats, please grow them for what they are – oats, not barley.”

1. Do everything possible to create a good friable soil structure ahead of sowing;
2. Drill earlier rather than later, preferably before April;
3. Ensure good pre-planting weed control and minimal soil movement at drilling;
4. Kick-start crop growth with manganese and zinc seed dressings;
5. Prioritise fresh available phosphate alongside balanced nitrogen and sulphur at drilling;
6. Pay more attention to potash and magnesium in the second fertiliser split;
7. Try to avoid additional fertilisation after GS31/32 wherever possible;
8. Employ a standard two-spray fungicide programme;
9. Match split-dose PGRs carefully to crop growth and weather conditions;
10. Be prepared to combine the crop before all the greenness has gone out of the straw.