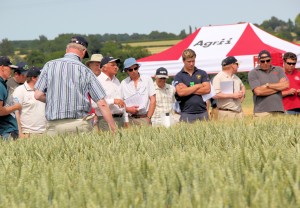 Choose wheat varieties for their suitability to your farm conditions before thinking about which market sectors to produce for this autumn. Make consistency the first consideration in your variety choice. And whatever wheat type you grow, prioritise its overall marketability.

“Milling varieties make up nearly 20% of current UK wheat plantings but a large proportion will never see the inside of a mill,” he pointed out. “This is mainly because increasing amounts of high output breadwheats like Crusoe and Skyfall are being grown for feed in the west of the country, in particular, to take advantage of their excellent Septoria tritici resistance ratings – over 7.0 in both cases in our 2014 national variety trials.

“At the same time, we know millers are taking significant amounts of Group 2, 3 and 4 wheats for today’s modern grists – of which there are about 60 in the UK at any one time. This creates good local milling market opportunities for a whole range of varieties; primarily those with the right protein functionality rather than level, and always those with decent specific weights and Hagbergs.

“Under these circumstances and with margin pressures as intense as they are, agronomic suitability should be the key variety characteristic for most growers this autumn,” he stressed. “Especially so with yield the main driver of cost per tonne and agronomic strength the best way of ensuring consistent yield at reasonable input cost. 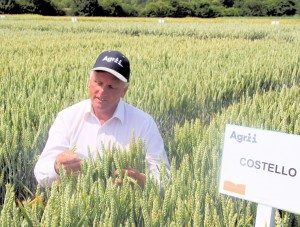 “Good marketability is more important than ever in the current market too. Regardless of wheat type, specific weight is the most vital ingredient.”

From his experience with crops on farm as well as in his extensive Agrii trials programme this season then, what varieties does Colin Lloyd pick out as particularly good options for this autumn ?

With consistent yield and marketability his Number One priorities, he has no hesitation in putting long-time favourite, JB Diego in first place, pointing to its excellent ‘multi-tasking’ performance over the last seven years, reliable agronomics, relatively early maturity and stand-out grain qualities.

Despite its now equally lowly position on the RL, he sees Relay continuing to be a good multi-purpose choice for most growers. Like JB Diego, it remains highly consistent in its performance across regions and delivers very nice grain quality, with somewhat better all-round disease resistance and standing power.

With a little more in the yield department, Colin identifies Dickens as another good all-rounder. He sees very high yields in AHDB November-January drilling trials giving the variety valuable extra flexibility for later sowing and its relatively early maturity being very welcome for many alongside most rather later feed wheats.

He also likes KWS Lili and Revelation for consistency, both scoring 7+  for Septoria resistance in Agrii trials.

“The multi-tasking potential of KWS Lili really stands out,” Colin Lloyd noted. “It was one of the top performers in our 2014 national variety trials, out-yielding most feed wheats. Plus it has a really solid grain quality with the opportunity to earn a useful premium on a buyback contract.

“I really like the look of Costello in just about every department too It could easily be the next JB Diego. As well as consistency, its specific weight is exceptional and, unlike many up-and-coming varieties in our untreated plots this season, it’s showing no sign of yellow rust breakdown. The only problem is there’s no seed available. But it’s certainly one to watch.

“Also unusual in holding up on the yellow rust front are Graham and KWS Siskin which look to be good candidates. Both are equally good on Septoria tritici and have strong grain quality fundamentals. With a maturity score of -3, Graham could be particularly valuable rotationally now Cordiale is taking so much yellow rust.

“Evolution seems to be rock solid as a second wheat. Although missing out on the RL for a single % in yield, Solace’s great Septoria strength gives it an important edge for western growers,” noted Colin Lloyd.

“I certainly like Crusoe and Skyfall for their agronomics as much as quality, although our untreated plots are showing noticeably more yellow rust on Skyfall this season and it doesn’t build protein as well as Crusoe. In turn, Crusoe is really taking brown rust badly.

“KWS Trinity could be a useful addition to the quality end of the spectrum, although maybe more as a ‘safe’ high yielding wheat with the possibility of a quality bonus than anything else.

“RGT Illustrious is a promising RL candidate with good agronomics on the quality side; particularly since the millers like it. 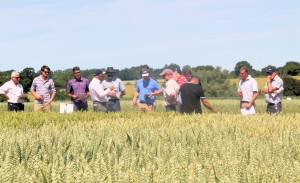 “Another wheat looking good in this respect is Edgar, favoured by Warburtons though not in the RL system. In addition to the sort of protein functionality this market wants, it has good across-the-board disease scores and stands out as the most black-grass competitive variety we’ve ever had in our Stow Longa trials.”

A key concern Colin Lloyd has this season is the number of candidate varieties as well as established ones breaking down to yellow rust in Agrii’s untreated plots. Some which came into the season with strong resistance scores of 7s or 8s now look more like being no more than 3s. And others which were solid 9s are showing clear signs of disease.

He also warns of the late season storm of brown rust evident on many varieties with less good resistance ratings.

While rusts may be relatively easy to manage with current chemistry, the 2016 acreage almost certain to be sown to varieties that have already been broken or are in the process of breaking down to yellow rust sounds clear warning bells; especially so with its epidemic nature.

So he strongly advises growers to be well-prepared to take particular care of many varieties with apparently high resistance ratings should the coming season favour yellow rust development while making sure to keep alert for brown rust from relatively high levels of inoculum carryover.