The rural community champions of the West are revealed 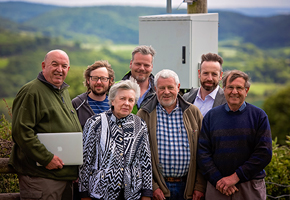 The search for Agrii’s local Rural Community Champions is over and it is delighted to announce that the team at Lingen Community Broadband, based in North West Herefordshire, has been selected as finalists, representing the West of the UK.

Agronomy business, Agrii, launched the Rural Community Champions competition in January. It asked the farming community and general public to send in their nominations as part of its nationwide campaign to identify and celebrate the people who make a real difference to the rural communities in which they live and work. The Directors of Lingen Community Broadband were one of three finalists to be selected by the judging panel – one from each Agrii region – West, North and East.

The team was nominated by local resident, Theresa Jones, and were selected in recognition of the real difference they make to their community by providing a communication lifeline to a sparsely populated, and technologically remote, area in North Herefordshire, including the areas of: Lingen, Birtley, Byton, Combe, Kinsham, north Shobdon and Pembridge. The volunteers have worked hard to establish and maintain fast broadband to 100 rural businesses and homes in North Herefordshire in the absence of any other viable alternative. The team has also recently given a primary school in Shobdon access to fast broadband.

Speaking about her nomination, Theresa said: “As a community we are extremely grateful for the efforts of the volunteers at Lingen Community Broadband. They have given our community access to broadband when no one else was prepared to. Without the team we wouldn’t have fast broadband – it’s as simple as that. As a farmer myself, and a mother of three schoolchildren, I need fast and reliable access to the internet to run the farm and it’s essential for the children’s education. In the absence of a reliable mobile signal in our area, the broadband provided by Lingen is a communication lifeline for us. The team has dedicated a huge amount of time to this project and I am very pleased they are receiving the recognition they deserve.”

Back in 2007 another company set up a local network, with the help of aid from Advantage West Midland funding, to supply broadband to rural areas in the Welsh Marches. However, after only three years they pulled the plug after deciding it wasn’t financially viable – leaving the community

with no usable broadband. A group of volunteers quickly established Lingen Community Broadband and despite several challenges, and lack of external funding, it has survived.

Steve Sanders, Chairman at Lingen Community Broadband, said: “The kind recognition of our efforts for this project is truly an accolade in itself. This competition will serve to help ensure that we are able to continue supplying a reliable, affordable and fit for purpose broadband service to our rural community for as long as it is required.

“When taking up this challenge five years ago, the life of the project was envisaged to be for around 18 months. It was then thought that a broadband salvation would come along from some other ‘white knight’ provider, rendering the need for our efforts redundant. However, this never came and there is no realistic alternative on the horizon. The team is proud of what we have accomplished and we continue to expand our coverage and level of service to meet the ever increasing demands in our area.”

Mark Thomas, Agrii’s Head of Marketing said: “We had a truly excellent response to our Rural Community Champions competition and it’s clear to see that there are many people making a big difference to their communities. This competition gave people the chance to show that this hard work isn’t going unnoticed in their local area. Our three shortlisted winners are all very deserving, with the team at Lingen Community Broadband being true champions of the rural community in the West region. We wish the team the best of luck in the final round.”

The team at Lingen Community Broadband were chosen as finalists from over 100 nominations from across the UK, and will receive £500 in prize money, which will go towards funding the service and its activities. The overall national winner will be chosen from the three finalists by Agrii customers at Agrii iFarm events this summer and will win a total of £1,000.

The campaign was run in conjunction with FCN, the charity supported by Agrii which provides guidance and support to farming families in times of crisis. Through campaigns like the Rural Community Champions project, Agrii hopes to raise the profile and highlight the importance of rural communities, and in turn demonstrate the support that FCN can offer farming families in times of need.