The trial, performed by crop advisers Agrii at its research and development iFarm located in East Malling, assessed the incidence of Botrytis cinerea in post-harvest June-bearer crops as an indicator of shelf-life potential.

The news will likely be welcomed by growers fearful that the withdrawal of synthetic fungicides will lead to an increase in post-harvest losses through a deterioration in shelf life and skin blemishes, explained Richard Killian, Agrii fruit agronomist who managed the trial.

Crops treated with a five-spray programme of Botector (Aureobasidium pullulans) had an average 15% incidence of Botrytis compared with 48% for the industry standard five-spray treatment. Disease incidence was assessed at seven days after picking in ambient storage.

The performance of Botector was also investigated as part of a programme with Signum, Switch and Teldor. Where Botector was applied as the final two sprays in a five-spray programme, the incidence of disease was found to be lower than in the standard programme. The results suggest Botector can be used as part of a programme alongside conventional fungicides and possibly other biologicals such as Serenade ASO (Bacillus amyloliquefaciens strain QST 713) or even as a stand-alone treatment depending on the disease pressure, explains Mr Killian. 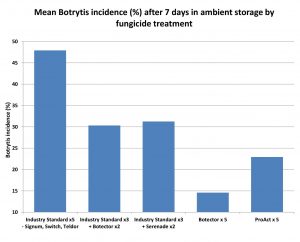 “We see Botector as bringing much-needed flexibility to crop protection strategies, with its 1-day harvest interval and no residue benefits. While the objective of this trial was to compare its efficacy with that of the commercial standard, more work is needed to determine its best place in a programme or whether it can reliably provide protection on its own,” says Mr Killian.

The results will give growers confidence to increase the role of biological fungicides within programmes without fear that yield, or quality will be compromised, believes Mr Killian.

“There is still much to learn about biological plant protection products as well as how conditions at application and how they are applied influence performance, but with every trial our understanding improves. Growers can rest assured that we are looking hard at the potential of biologicals in all their guises,” says Mr Killian.

Identifying those for which actual performance matches that claimed has taken on greater emphasis as the rate at which conventional products have been withdrawn has accelerated. “Understanding how a mode of action works is only one consideration, assessing performance requires first-hand experience and robust trials,” adds Mr Killian.

While the performance of bio-fungicides remain the subject of great interest, the contribution other forms of biological treatments can make to crop health is the focus of ongoing studies for Agrii.

A product that has delivered a consistently strong performance is ProAct, (harpin alpha-beta protein). It has been the subject of extensive trials given the role of harpin proteins in eliciting defensive pathways that promote growth and nutrient absorption.

“We know from earlier work that the increased calcium assimilation promoted by regular applications of ProAct results in crops with higher marketable yields and longer shelf-life, so we included it in the trial mainly out of curiosity,” says Mr Killian.

“Making sense of biological products is often about applying them at the suitable phenological stage. ProAct has consistently delivered positive results in the form of increased marketable yields, less frost damage and greater shelf-life through increased fruit firmness, so we felt it was worth including in the trial,” he says.

Its performance needs further investigation, concedes Mr Killian, but he believes it serves as further evidence that both growers and advisers are yet to fully utilise the potential that biological products in all their guises can make to crop production.

Currently, bio-stimulants are not the subject of a formal EU or UK regulation and are instead covered by a definition issued by the European Biostimulant Industry Council. This covers a multitude of products ranging from seaweed extracts to amino acids to growth-promoting bacteria and fungi. This will change in 2022 when the EU introduces the Fertilising Products Regulation (2019/1009) which will include bio-stimulants as a defined category. This means manufactures will be able to obtain CE marks for products that meet the regulatory standard. While this will bring much-needed legal rigour to the category across the EU, it is not yet clear how, if, or when the UK might choose to align with these regulations.

Until biological products are the subject of a more defined legal text, it falls to those using them to assess their potential usefulness. This may involve product comparison and application trials, but it also goes far deeper, explains Mr Killian.

“A plant’s natural stress response mechanisms are the subject of ongoing international investigation in several cropping plants. There is peer reviewed evidence that when triggered appropriately these can make a meaningful contribution to reducing the impact of disease while promoting yield and quality,” says Mr Killian.

“As synthetic plant protection products are withdrawn from the market, the need to better understand how biologicals can be used in a financially viable manner to maintain crop yield and quality increases. We see it as part of our responsibility to growers to develop this knowledge. Experience so far is encouraging,” he says. 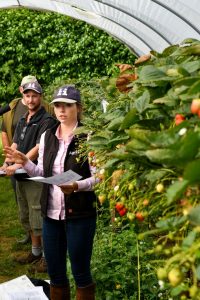