We’re pleased to have sponsored the 43rd FWAG Silver Lapwing Awards, which took place earlier this month after a two-year wait. The Award was last won by Agrii customers Charles and Airlie Inglis in 2019, for their efforts in promoting habitat and environmental management on their farm in Norfolk. This year’s ceremony was held at Hole Farm, and Charles Inglis led guests on a tour of the extensive restorative work that he and Airlie have undertaken alongside parents-in-law Robin and Rose Carver. The farm has now been transformed and is teaming with wildlife, having been planted with 9 miles of hedgerows, 60 acres of new woodland, 14 ponds and scrapes and 56 acres of environmental margins. 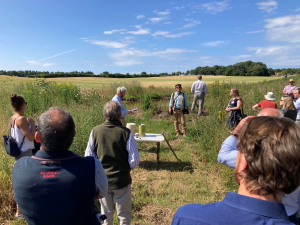 This year’s Silver Lapwing award was then presented to James Robinson of Strickley Farm in Kendal, Cumbria, which is made up of 300 acres of organic land, 250 pedigree dairy shorthorns and meadows filled with over a hundred different species of flowers, grasses and herbs. The farm is run by James alongside his father Henry and son Robert, and hosts local school visits for children. The judges commented that the competition was incredibly high this year and for only the second time in Silver Lapwing history, the judges awarded two equal runners-up; Robert and Lynne Jackson, Manor Farm, Cheltenham, Gloucestershire and Matt Doggett, Manor Farm, Barley, Royston.

Hole Farm, viewed from above

You can find out more information about the Silver Lapwing Awards on the FWAG website here.