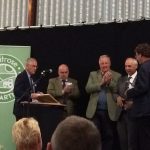 Agrii is pleased to have been one of the sponsors of this year’s Silver Lapwing Awards, run by FWAG. This year’s event on 12th September was hosted by last year’s winners, Agrii customers Richard and Helen Roderick of Newton Farm, Brecon. To win this prestigious and longstanding award, a farm has to demonstrate a real commitment to species and habitat conservation and be able to show how they integrate their environmental management within their overall farm business. Understanding and conserving historic aspects of the farm is also important, and in addition consideration is given to the farm’s approach to conserving natural resources. 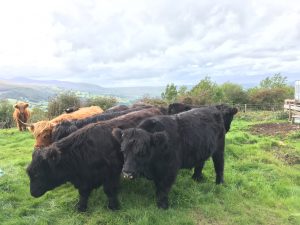 Richard and Helen farm 650 acres of land spread around the Usk Valley, with 75 suckler cows and around 1050 ewes, 260 ewe lambs and approximately 50 acres of low input cereals. Across the farm Richard has restored a patchwork of small fields by planting new hedgerows and installing double fencing to produce and protect excellent hedges. He has also fenced off his streams, allowing wildlife to move about the farm freely in these corridors, while improving the quality and ecological health of the river. Lower down the valley he has been restoring river banks on the Usk to reduce bank erosion and siltation issues downstream. There is a significant iron-age hill fort above the farm where Richard has been laboriously clearing bracken and scrub and he has purchased Highland cattle to maintain the cleared ground. The judges were particularly taken by the conversion of a WW2 bunker into a hibernaculum for the Lesser Horseshoe bat. Energy requirements have been reduced by the installation of a woodchip heating system in the farmyard and a small solar PV installation, while red clover is used to reduce the use of nitrogen fertilisers and the use of bought-in protein. There is considerable engagement with young farmers and with local school children and, to cap it all, Richard was Sheep Farmer of the Year 2015. 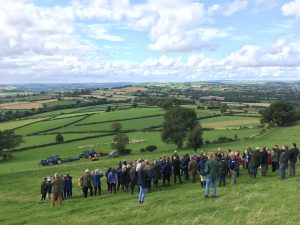 This year the judges travelled the length of the country to meet and judge the seven finalists, and at the event on 12th September, Edward Flatt, who farms at Eastwood Farm near Lowestoft was crowned the 40th winner of the prestigious Silver Lapwing award for 2017. Edward farms around 360 acres on soils varying from light to very thin, on which he grows a rotation of spring beans, winter barley, spring barley and sugar beet. He describes himself as a spring crop specialist. Production is limited by soil type, so Edward has embraced conservation wholeheartedly. He has prolific low input barley, followed by overwintered stubble and a host of 12m cultivated headlands producing a huge range of rare arable plants.