Fife grower, David Bell of Strathkinness near St Andrews and his Agrii Tayforth agronomist, Iain Anderson showed just what first-class barley management can do by carrying off the 2019 Cereal YEN crown for highest winter cereal yield in Scotland.

In doing so they out-performed the vast majority of wheat entries from across the UK and proved that, with the right agronomy, conventional barleys can give hybrids a run for their money.

The pair took full advantage of the generally favourable season to win the competition with an impressive 14.3 t/ha from their 2ha block in a field of KWS Orwell grown as a second cereal; a performance that clearly puts the world field yield record of 13.8 t/ha held by New Zealand grower, Warren Darling within sight.

In addition to the highest yielding Scottish crop, indeed, this was sufficient to put the team ninth overall among the almost 250 cereal field entries in the ADAS competition. No mean feat, considering the overwhelming majority of these were wheat and most followed a cereal break.

“All the benchmarking comparisons the competition gave us were against wheat guidelines,” noted David. “So, we have to be cautious about interpreting them. But, there again, our whole approach with the crop was to see what we could do by treating it a bit more intensively than a ‘normal’ winter barley. More like a wheat, in fact.

Like the other 2019 national and regional YEN winners, a good rotation and plenty of organic manuring at Upper Magus Farm were important elements in the crop’s performance. As were a kind autumn and winter, giving good crop establishment, rooting and tillering.

Although lack of sunshine was a concern through the spring and summer, little intense heat either meant generally good grain set and gentle, prolonged ripening. Indeed, the crop stayed very green well into July and wasn’t harvested until well after most winter barleys in the area.

“Very wet weather at the end of July and into early August delayed harvesting and didn’t make it any easier,” Iain recalled. “Even with the robust PGR programme we employed, we had quite a bit of brackling by harvest. Thanks heavens we went with one of the shortest and strongest stemmed varieties on the RL and dry spring didn’t tempt us to rein back on our spraying.

“The results also confirm the value of our decision to go for a five rather than traditional three spray programme, starting ahead of T0 and ending at T3. Splitting each of the normal T0 and T2 sprays into two applications allowed us to simplify our tank mixes to minimise stress on the crop. At the same time, it enabled us to optimise the timing of our PGRs, fungicides and foliar nutrition and match them to the needs of the crop at each stage.” 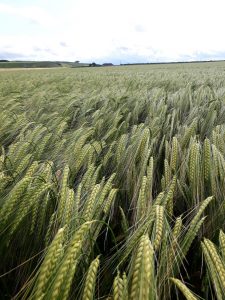 Tissue analysis prior to each spray timing – using the advanced yield and growth stage guidelines developed by Agrii and Lancrop – allowed the programme to be carefully geared to correcting any hidden hungers throughout the growing season. A specialist biostimulant was also included with two of the earlier applications to encourage nutrient uptake and relieve crop stress.

“Even though the dull summer limited crop potential, it was definitely a good season for cereals,” said David Bell. “Our barley responded particularly well to the more intensive management we gave it, staying very green throughout and showing no signs of stress at any stage. It was painfully slow to ripen, though!

“YEN is helping us better understand what winter barley needs and just what it can do for us if we manage it more like wheat. Our aim now is to apply the lessons we’ve learnt from the trial field across the whole farm so we can make the most of what has tended to be rather a Cinderella crop in many cases. And who knows, maybe Iain and I will be able to have a crack at the world record at some stage. It would certainly be good to bring the title back home from New Zealand, just like Rod Smith and his Agrii team did with wheat in 2015.”