Reducing the frequency of oilseed rape in the country’s main arable rotation may well improve its performance. But this could easily be at the expense of farm profitability if growers are not very careful indeed.

“With escalating weed, pest and disease problems, an increasingly restricted agrochemical armoury and disappointing commodity markets, it isn’t surprising far more growers are looking at their rotations far more open-mindedly these days,” said Paul Pickford. “Not least with winter OSR a relatively risky crop to grow and second wheat a disappointing earner for many.”

“The wheat/wheat/rape rotation that has been the first choice for heavy land across much of the country is being called into serious question in terms of both black-grass management and oilseed rape pest and disease control,” added Colin Lloyd.

“In response, more and more people are looking to widen their rotation and/or re-introduce an element of spring cropping to profit from the advantages our research has long shown from a more integrated ‘beyond-the-can’ approach to black-grass control in particular.

“The problem is that it’s all too easy to throw out the baby with the bath water,” he stressed. “This becomes crystal clear from an examination of various rotational options with the Agrii consultancy services farm budgeting program.”

Taking wheat/wheat/rape as their base, Paul Pickford and Colin Lloyd have explored the financial implications of a number of alternative heavy land rotations using the most up-to-date crop values and costs. In each case, they have calculated the average annual margin across the rotation to provide the best profitability comparison.

With a typical 9.0 t/ha first feed wheat, 8.0 t/ha second wheat (again for feed) and 3.75 t/ha winter OSR, their base rotation delivers an average annual margin of just under £455/ha.

Replacing the second wheat with an 8.0 t/ha crop of winter feed barley to achieve an earlier entry for rape crop and push its performance up to 4.0 t/ha increases the average margin to nearly £493/ha, courtesy of a better margin from the barley as well as extra output from the rape for the same input cost.

While spring instead of winter barley provides a less good entry for rape and lower (3.85 t/ha) assumed performance , this is made-up for by a malting premium on a conservative half the 7.5 t/ha crop and lower input costs to deliver an almost identical £492/ha average margin.

“As our long-term Stow Longa research clearly shows, the spring barley option will really help where black-grass is problematic,” pointed out Colin Lloyd.  “In this case, you can improve your OSR entry by growing an early maturing variety like Explorer, which also offers a useful premium over standard Propino on one of our high nitrogen Budweiser contracts.

“Growing a 7t/ha crop of milling wheat in place of barley in the spring would theoretically increase the rotational margin a little. But in most cases, the lateness of harvest is likely to seriously compromise OSR establishment.

For bad black-grass problems, Colin Lloyd always advises two years of spring cropping in a row. In this case, a winter wheat/spring barley/spring barley/ winter OSR rotation looks the best bet. With the same yield, price and cost assumptions for the cereal crops and a 3.95 t/ha OSR yield to reflect a far-from-ideal rape entry but four years rather than three between crops, the average annual margin works out at £487/ha.

“Where you really want to get on top of bad black-grass, this isn’t much to pay for the reduced weed seed return and the improvement in subsequent wheat performance likely as a result,” he suggested.

Although it should allow OSR yields to be progressively increased, widening the rotation further, however, could become self-defeating on a whole farm basis, the Agrii calculations suggest. This is mainly because an alternative break crop and/or second wheat needs to be introduced, both of which can seriously dilute the margin across the rotation.

Replacing the second wheat with spring barley here improves the annual rotational margin to £456/ha, but this is still only to around the original wheat/wheat/rape level.

“The nub of the problem is that alternative break crops really struggle to match the margins possible from winter rape, even at rapeseed base prices as low as £250/t,” Paul Pickford  insisted. “This is mainly because the markets for peas, beans and other crops are far more restricted. So, as we’ve seen over the past season, extra supplies can really push prices down.

“While we were looking at £155/t for 2016 feed beans last July, we’re currently reckoning on £130/t. Yet they need to be up around £200/t to make them a competitive break. Under these conditions, it seems madness to us that pulse-growing is forecast to increase substantially yet again this season !

“Our studies strongly suggest most growers would be better off accepting the yield-limitation of growing winter rape every three or four years and making the most of these crops by fine-tuning their agronomy rather than looking to stretching the rotation any further as the solution to OSR concerns.”

“For those prepared to grow the crop, replacing second wheat with winter barley has to be a sensible response to the need to get the best possible OSR entry for the most reliable autumn establishment,” stressed Colin Lloyd. ‘Although it may not have the later drilling flexibility of wheat in black-grass management terms, as we’ve seen at Stow Longa the right winter barley can effectively compensate for this through particular competitiveness.

“The spring barley options – either one or two in a row – can clearly have valuable advantages in spreading workloads as well as managing black-grass. But the watch-out has to be in any harvest delay. So it’s not a course of action I’d recommend where flea beetle or weather risks make OSR sowing especially time-critical.”

Paul Pickford and Colin Lloyd are adamant that the best course of rotational action will depend on careful consideration of the individual farm position and specific abilities, priorities, resources and opportunities rather than any generalised margin calculations.

They urge growers to examine the options carefully with their agronomists inputting their particular conditions and expertise into their own average annual rotation margin calculations.

“Used in this way our laptop-based farm budgeting program should ensure fewer people adjust their rotations in haste only to repent at leisure,” concluded Paul. 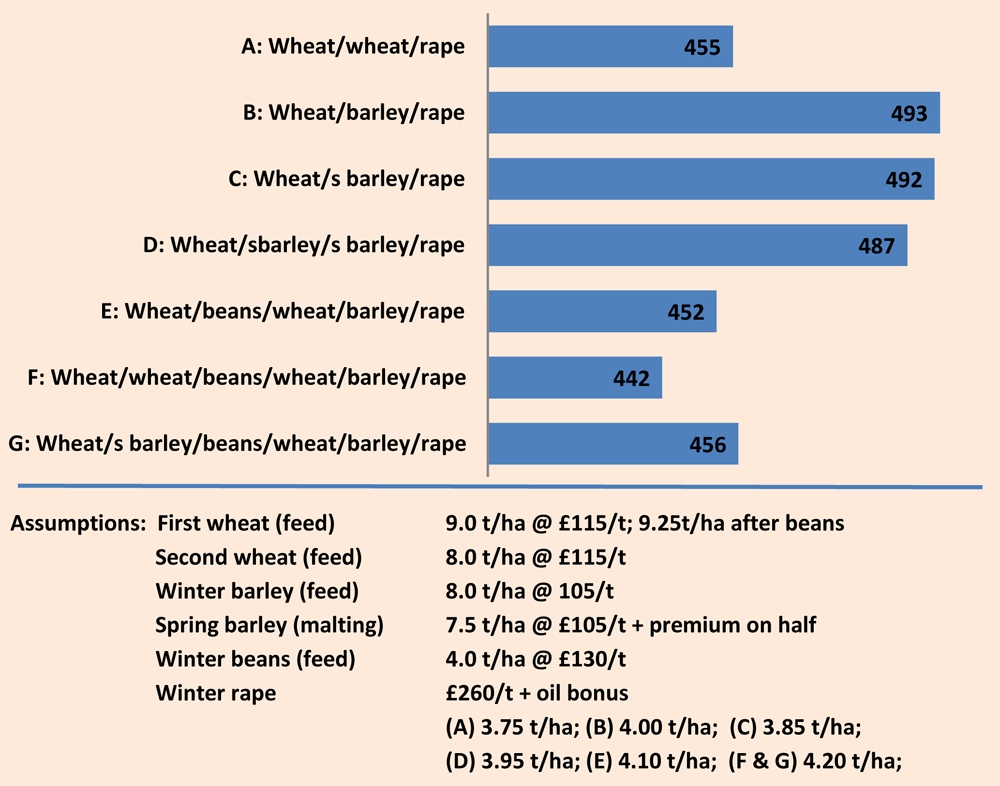