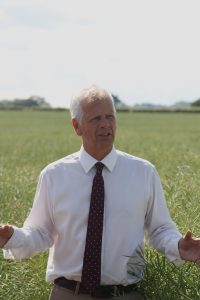 He is adamant, however, that the greatest gains will come from looking well beyond output potential to key yield-preserving and enhancing characteristics.

Most important in his view are establishment ability, speed of early crop development and foliar disease resistance; especially so in matching varieties carefully to individual farm and field circumstances.

“Establishment is everything in getting the most out of winter rape,” David Leaper insisted. “As well as determining whether you have a worthwhile crop to manage, it sets the plant population you have to work with for the rest of the season.”

Agrii measurements of leaf emergence and green area index show different hybrids as well as pure lines vary widely in their speed of development. This can make all the difference to their performance, depending primarily on soil type, seedbed conditions and sowing date.

“For the best results with demanding soils, in less-than-ideal conditions or from later sowing you need a fast or medium-fast developing variety which has sufficient get-up-and-go to grow away from early challenges,” explained David leaper. “This will allow you to sow at relatively low seed rates with confidence to achieve the 20-30 plants/m2 in the spring we know give the most productive canopies.

“Where you have a combination of fertile ground, good quality seedbeds and early sowing, however, just like wheat, you need a slower developing variety that doesn’t put on too much lush, thick growth ahead of the winter, leaving you with a canopy that’s difficult and costly to manage.”

David Leaper also advises everyone to prioritise high levels of resistance to both phoma and light leaf spot given the yield losses these diseases can cause without the most timely and costly spraying. As early drilling puts far more light leaf spot pressure on crops, he sees the most robust resistance as especially crucial for this drilling slot.

Regardless of variety, he identifies good seed-to-soil contact, an even depth of sowing and sufficient early moisture as the main essentials for the best establishment, adding that there’s now overwhelming evidence of the value of placing nitrogen or DAP in the seedbed.