News that another previously undetected strain of late blight (Phytophthora infestans) has been confirmed in Great Britain will surprise few. Fortunately, 41 _A2 has so far only been found in a crop of Maris Piper grown in Fife but on the balance of probabilities, it’s unlikely to be an isolated case.

That’s the view of Nick Winmill, Agrii head of potato technical and development. But its presence raises some interesting questions and one of the most confounding is how did the new strain get there? It’s a pertinent question given that the UK has not allowed seed imports for the past two years, he says.

There are several possibilities, but some are more plausible than others, notes Nick. “It may have been carried on the wind but at 700km against the mainly prevailing airflow, I believe this is unlikely to be the reason.

A more plausible explanation would be that it has either been here for several years undetected – it was first detected in Denmark in 2013 – or that it spread from another host, perhaps tomato. Either way, once here these strains tend to stay.”

So what do we know about 41 _A2 and does it have characteristics that set it apart from other strains? Perhaps more importantly, should growers be concerned? The short answer is that enough is known about 41_A2 to take it seriously but there’s no reason to be despondent, believes Nick.

“Research suggests it’s highly aggressive and we know from work in Estonia that it has exhibited some insensitivity to fluazinam. Work in Denmark suggests a shorter latent period, meaning it can cycle between sporulations more quickly than other more established strains. The consequence of this is yet another reminder of the need to be vigilant to the threat facing crops,” he says.

Results of the blight samples submitted by blight scouts reveal how the blight population is becoming highly regionalised. While this is perhaps a reflection of how the advice to growers on crop protection varies across the country, it could also be a function of how conditions at a local level influence disease spread. In Wales, for example, there’s a high incidence of the fluazinam-insensitive strain 37 _A2, while in England 36_A2 accounted for 40% of samples in 2021.

The 36_A2 strain is less well established in Scotland, where 6_A 1 dominates -accounting for 30% of cases tested. Another train, 8_A 1, has become more prevalent in Scotland in recent years and was found in 15% of samples in 2021, but it’s rarely seen elsewhere in Great Britain.

“The results are most valuable when viewed through the prism of the limited fungicide choice,” says Nick.

“We know 36_A2, and to a lesser extent 37 _A2, can sporulate at lower temperatures than either 13_A2 or 6_A 1. The reason neither of these strains have established successfully in Scotland is a mystery.”

The shorter latent period of 36_A2, which is now an old foe, and most recently 41_A2 presents another challenge, says Nick.

“How can we maintain protection between irrigation passes at times of high risk to crops?”

That’s when looking back can provide lessons for the coming season, he says.

In 2021, the period of high pressure in July, especially in the south and east of England, highlighted the capacity of modern strains – in this case 36_A2 – to inflict considerable damage in only a short period of time, he says.

It’s the fitness advantage these strains demonstrate that’s changing the way crop protection strategies are delivered, believes Nick. His advice to growers is to plan for the worst but hope for something far less devastating.

“In some situations it can be easier to plan backwards from desiccation. This way crops can be adequately protected, and programmes comply with resistance management guidelines.
“At the basic level, the main development (with the evolution of the blight pathogern) is that crops come under pressure at lower temperatures than in the past. This means keeping an eye on temperatures and being ready to start earlier than might have been the case just five or so years ago.” 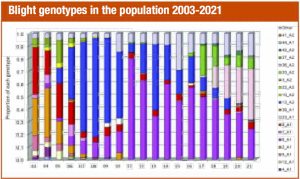 If this were the only development it probably wouldn’t be much of a problem but add in a latent period of less than four days and the complexity becomes clear. How growers schedule irrigation and spray timings to fit around blight spraying presents a problem,” he says.

“Add in some high blight pressure for a month and this is when programmes can move from 10· 12 sprays, to the mid to high teens. Under such circumstances, staying within the FRAC guidelines for resistance management can be a challenge,” he adds.

The overriding objective, believes Nick, must be to preserve the integrity of the products available and minimise the risk of insensitivity developing.
“I still favour mancozeb as a mixing partner, especially during the early season when it will be useful for protecting against alternaria, but also because of its multi•site activity. Multi·sites are important in protecting the effectiveness of not just the products we have now, but those coming in the future.

“We have seen this in our trials. The pipeline products coming through from manufacturers deliver strong protection in their own right, but they’re all single site mode of action products so they need a strong partner to protect them from the risk of insensitivity developing. This is about being smart in the programme,” he says.
As the season progresses, there’s a necessity to bring in other partner products.

It’s the choices growers make at this time that will shape the blight strategy towards the end of the season, he says.

“I would encourage growers to trade up from cymoxanil to Versilus (benthiavalicarb). There’s strong data from SRUC comparing the curative performance and forward protection from enthiavalicarb and cymoxanil. We know from other work that cymoxanil has at best 36 hours of curative activity, but we now know Versilus plus the drift retardant, Crusade, that there’s an uplift in performance that takes its curative activity above that of lnfinito (fluopicolide+ propamocarb), which is widely regarded as the standard to beat. This will be vital in periods of high pressure in the mid-season,” he believes.

“The strong performance of Versilus and its compatibility with a range of other active substances means that it has a place across the programme. Making the most of its contribution while staying within FRAC guidelines is the challenge. For those who favour Zorvec Endavia (benthiavalicarb+ oxathiapiprolin) it creates a difficulty,” he adds.

FRAC guidelines state that no more than six fungicides from the Carboxylic Acid Amide (CAA) mode of action group, of which benthiavalicarb is one, should feature in a programme and that no more than three consecutive applications of a CAA should be made. It also gives the guidance that CAA fungicides shouldn’t make up more than 50% of the programme.

For those keen on saving a CAA for elsewhere in the programme, one option is to switch to a zoxamide-containing product, such as Lieto (cymoxanil+ zoxamide), advises Nick.
“If we’re to stick to the FRAC limitations, then it makes sense to use mancozeb – either with or without cymoxanil – in the early part of the programme because the focus is on protection in, what we hope is, comparatively low pressure.

More consideration could be given to construction of the blight programmes to avoid becoming backed into a corner should the disease pressure intensify, believes Nick.

The big question to consider is what to do if programmes expand from a typical 10-12 sprays to a programme consisting of 16-18, he says.

“There are desiccation implications stemming from the loss of diquat. In general terms, think about desiccating a week earlier than previously. In practice this means not being late with nitrogen fertiliser applications either.”

It’s often easier to plan the programme in reverse to make sure there’s sufficient tuber blight protection at the end of the season to run alongside the desiccation programme, says Nick.

“This means we can use the two Quinone inside Inhibitors (Oil) products, amisulbrom and cyazofamid, with a suitable mixing partner and in alternation with products containing another mode of action, such as lnfinito (fluopicolide+ propamocarb).

“The approach will change again in 2023 as we expect to have a new product come to market that will expand the product choices,” he concludes.