Alongside getting to grips with black-grass, understanding cover crops and improving soil structure and health across the 1200 ha of cropping at Revesby Estate near Horncastle, manager Peter Cartwright and Agrii agronomist, Richard Butler have been employing a range of precision farming tools over the past seven years.

They continue to be frustrated with the lack of consistent progress they’ve been able to make with the available technologies, dipping in and out of variable nitrogen, seed rates and variable P with the seed, in particular.

However, they are convinced that digital agronomy is the future; digital tools will become an indispensable part of their crop management team; and they will look back in 10 years’ time and wonder why they ever had any doubt about their value.

Part of their frustration at Revesby has come from technologies which promise more than they are currently able to deliver in practice and have particular problems communicating with one another, making them net consumers rather than savers of time. 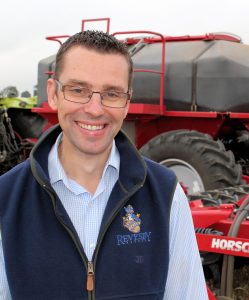 “We’ve always been keen to try new things here,” says Peter. “But just because digital tools allow us to do something doesn’t mean we should do it. Equally, just because something works well in one set of circumstances doesn’t mean it will be as valuable in another.

“Applying variable rate phosphate with the seed to improve the consistency of wheat establishment from the delayed drilling central to our black-grass management programme, for instance, seemed like a great idea. Until we discovered the extent to which work rates were being compromised by continually having to refill the fertiliser hopper.”

“The more we thought about it too, the more we appreciated that wheat’s big demand for
P is in the spring,” adds Richard. “And the generally high pH soils here lock it up. So, we now apply phosphate in a protected form at a low flat rate level with the seed and top it and the potash up variably in the spring.

“This works better all-round. Particularly so, as basing our applications on soil sampling by mapped management zones has really highlighted the inadequacy of the old ‘W pattern’ sampling method of the past. We found that some fields previously assessed as adequate for P were seriously short in some parts.”

While the zoned P, K, pH and organic matter status maps of the estate’s fields pinned to Peter Cartwright’s office wall are a valued aid to soil management at Revesby, he and Richard have found soil mapping of far less value for variable rate drilling.
Originally introduced to help maximise wheat competition against black-grass, the team called a halt to variable seeding in 2018, having found no reliable way of basing rates on soil type; mainly due to the whole host of other factors influencing establishment – especially moisture retention, stone content and slug pressures.

“Having flat rate sown all our wheat for the past two years, we’re basing our variable rate Digital Technology Farm trials on a combination of previous early April NDVI images and yield maps. We’re also using last year’s wheat NDVI and yield maps for the field in question as the basis for varying our spring barley trial sowings.

“If this produces the results we hope, we should have a much better recipe for variable seeding. I have to say, though, the 30cm spacing of the coulters on our Horsch drill may mean too much competition in the row at higher seed rates. At the same time, what works well for a shy-tillering wheat may not be so good for a more free-tillering one.

“Like many other digital tools, things that appear deceptively simple on the surface are often very much more complicated when you look into them. And they aren’t made any easier by the perennial difficulties of moving data between Gatekeeper, Rhiza and our tractors, not to mention flash drive failures.”

As well as the accuracy of early April Contour NDVI imaging in predicting wheat yields, Peter and Richard have been finding GCVI (chlorphyll) images useful in timing their OSR desiccation.

Providing the imagery is ‘ground-truthed’ by checking key areas of the crop for ripeness, they stress it gives a far better overview of the field’s state of maturity than they can get from trying to fight through the canopy on the ground.

The accuracy of the Rhiza system coupled with New Holland yield mapping is also proving invaluable in the treated/untreated trials on which they base their wheat variety choice.

The 18 varieties they trialled in 10m strips last season, for instance, showed Graham, Shabras, Zyatt, Skyscraper and Costello as the stand-out varieties, with Graham’s performance mirroring its average across the farm.

This year they are monitoring 19 wheats in half-hectare plots with different input regimes, using Rhiza to highlight differences in the onset of any nutritional deficiencies as well as disease development.
“Today’s digital and precision technologies are fundamental to accurately setting up, managing and recording the performance of these and the other trials we run across the farm,” points out Peter.

“They have been essential too in establishing and managing the controlled traffic system that proved a godsend in allowing us to travel through last winter on land where fieldwork was almost impossible back in 2012. As a result, the winter crops we have all received the treatments they needed when they needed them.

“While we continue to be ‘digitally frustrated’, we have actually been finding the technologies increasingly valuable in a number of ways. We’re looking to make more and more of them as our DTF trialling shows us how they can best be applied to our own particular needs.”