Little agronomic differences can add-up to big winter oilseed rape performance benefits when the going gets tough, growers discovered at a specialist Agrii research and development day in Wiltshire this month. 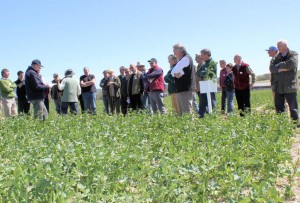 Held at the company’s AgriiFocus Technology Centre at Aldbourne near Marlborough by the kind permission of R.N & M Lawton, V.S Bland & Sons and Ridgeway Farming, the event attracted growers from across southern England. Not surprisingly, after the most difficult winter in recent memory, improving the resilience of future cropping was at the forefront of their concerns.

Only sown on September 12th, the 600-plus variety, nutrition, establishment and systems development plots on the 5 ha oilseed rape trials site were clearly showing the effects of the season. A good 2-3 weeks behind where they’d normally be and less than half the height, the crops were only just coming into flower at the beginning of May. But clear differences between treatments were giving valuable insights for the future.

“One thing this year has really brought home is the critical importance of the best possible establishment,” stressed Agrii head of crop science and stewardship, David Langton. “We’ve seen substantial differences between varieties, systems and treatments here. Big root systems, in particular, have been worth their weight in gold.

“Our studies show it’s worth considering 30kg/ha of seedbed N; especially with single pass systems which don’t mineralise much nitrogen. And diammonium phosphate (DAP) with the specialist P-Reserve coating to limit lock-up really should become standard to ensure there’s  enough readily available phosphate close to the roots to meet the crop’s massive early demand for the mineral.”

“Being out of sight in the rooting, the benefit of these two treatments only became apparent with spring growth,” he reported. “But they’ve given the crops a particularly valuable head start, the results of which will be very interesting come harvest.

“Consolidation has been a key difference between success and failure on calcareous soils like these too,” Peter Gould added. “We’ve seen a lot of failures with one pass systems which couldn’t be adequately rolled. Once pass, twice consolidate needs to be the watchword.”

“Slow developing varieties have suffered badly,” he explained. “By far the largest proportion  of the crops I’ve had to pull out this season have been slow developers. And of those that have survived most have many lower buds that will never break dormancy to produce enough side branches to compensate.

“In contrast, the faster developing hybrids have come through well.  DK Excellium drilled at 25 seeds/m2 is looking especially good, for instance, with a far better structure and lateral development than most. Like almost every crop this year, our better hybrids have got some serious catching-up to do. However, their canopy structure bodes very well for performance. I foresee a lot of people looking to these types this autumn.  After all, I’d far rather have a canopy that needs managing in a growthy season than none at all if we get another like this!”

While regional technical adviser, Gary Bosley is equally positive about the ability hybrids offer in uncertain conditions, he insisted they must be carefully managed. By which he means they shouldn’t be put in too early, on high fertility ground or at too high a seed rate.

“We definitely need to get our OSR sown in August if at all possible,” he advised. “That way it has the day degrees of September – as many as the rest of the autumn put together – to get going ahead of winter.

“Our work with double PGR programmes last year showed we have the tools to manage large canopies if the season favours them. Even so, I prefer not to be faced with excessive challenges in this respect. I like to minimise the risk by getting the seed rate, in particular, right.

“Band sowing presents a clear challenge,” he warned. “In these regimes, competition depends on the number of plants per metre of row. So it’s important to appreciate that wider rows means you need fewer seeds/m2 for the same population.”

Bringing it all together, agronomist, Andrew Richards sees autumn decisions as remaining the critical factor in winter OSR.

Stressing that last autumn showed just how damaging a week’s delay in planting can be,
he urged growers to consider two principle things for the future – how best to minimise the risk of this delay, and what can be done to help make up for it.

“Minimising the risk really comes down to rotation,” he said. “Perhaps we need to rethink our attitude to winter barley? Or, at the very least, avoiding concentrating too much of our acreage on the late-maturing wheats that have come to dominate the RL in recent years.

“Alongside this, we need to make up for any delay. This means better variety selection, cultivation system use, seedbed fertilisation, consolidation and early rooting enhancement, amongst other elements of early crop management.

“At the end of the day too, we almost certainly need to be far better disciplined in deciding when to stop drilling OSR and adjust our cropping plans to compensate.”