Agrii have been appointed the exclusive UK distributors for OvinAlp MV100, a novel organic soil conditioner which is naturally rich in organic matter. MV100, is derived from the fermented manure of Alpine sheep (known as migon), a natural product which has been used on vineyards in Europe for millennia.

The manure, which is collected when the sheep are in winter housing, is exposed to a twelve month long solid fermentation process. This process promotes the formation of stable compounds such as humic precursors which help create soil structure, but the high temperatures achieved ensure that the product is completely sterilised, and any pathogens present in the raw material are neutralised.

MV100 qualifies for organic status in France and Agrii are currently in the process of registering it organic bodies in the UK. High in dry matter (80%) and easy to handle, it contains 60% organic matter, and each tonne supplies a massive 515 kg of humus. The end product contains actinomycetes which represent a large proportion of soil biomass and have the capacity to produce a wide range of beneficial antibiotics and extracellular enzymes to help boost soil biology. Because of its fine structure, MV100 improves the both the physical and biological properties of the soil, as well as improving cation exchange capacity to improve the nutrient cycling and holding capacity of the soil.

“The process, which is influenced by seasonal fluctuations in the local climate of the Alpes-de-Haute-Provence region in south east France, includes both mesophilic and thermophilic phases which helps to select the right balance of beneficial micro-organisms to break down compounds such as cellulose, hemicellulose and even lignin – resulting in a product which is readily incorporated into the existing soil structure, adding a uniquely stable supply of humus and beneficial bacteria and fungi.” 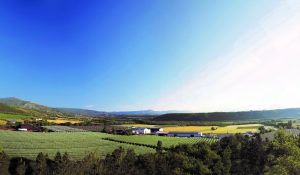