Masses of mycorrhizae and an upsurge in mole populations are ‘living’ proof of the success of the increasingly regenerative integration of cropping with Ludchurch Farms’ substantial dairy herd near Narberth on the south western tip of Wales over the past four years.

This stems from the determined effort Phil Davies, his wife Louisa and son, James have been making with Agrii agronomist, Dai Llewellyn to put the most sustainable crop production science into the 600ha of ‘arable’ land on the Green Horizon’s network farm.

“It’s amazing how much things have improved in such a short time,” stresses Mr Davies, pointing to a veritable mat of mycorrhizae in the stubble of this year’s first silage cut and a wonderfully rich, well-structured, root-filled soil beneath it.

“The upper nitrogen application limits in the latest RB209 are based on just 12-15t/ha of silage dry matter a year. Yet our detailed weighbridge records prove we are getting around 20t DM/ha from our new leys these days. “We are also typically harvesting 14t/ha of 35% moisture winter wheat for crimping.

“As well as what we see and measure ourselves, our slurry contractors tell us how much better the ground is travelling. And our mole man simply cannot believe the extra pressure we are putting him under!  Our focus on mixed cropping with year-round roots in the ground and the most effective organic manuring is really paying dividends.”

Everything Ludchurch Farms grow supports their high-output 1250-cow Holstein herd which, in turn, supports their cropping with large volumes of muck. While grass silage remains an essential part of the rotation, its area has been reduced markedly in recent years in favour of cereals. Interestingly too, maize has no place in the business.

“We tried maize once, but we simply can’t afford to undo all our soil improvement efforts by growing it,” says Mr Davies. “It disrupts roots in the ground and provides no opportunities for manuring the growing crop.

“We did have more than 300ha of grass but have now cut this back to just over 200ha to make sure we get enough weather windows for four good quality silage cuts followed by timely slurry spreading; something that isn’t easy with a big area and 55-60” of annual rainfall.

“More wheat (both winter and spring) and winter barley instead these days gives us much- needed extra flexibility here. Crimping all the grain and clamping it with a preservative is also a big advantage because we can combine it 2-3 weeks earlier than conventional grain. So, we are nowhere near as vulnerable as we would otherwise be to our wettest month of the year – August.

“Although it takes extra work to dry down in the field, the cereal straw – which we tub-grind – provides us with the bonus of a really valuable bedding material for our cubicle mats as well as a good dry cow feed. This saves us more than £150,000/year in bought-in straw.

“It’s all about growing what we need for our cows cheaper than we can buy it in. Which, with rolled wheat trading at well over £300/t – if you can get it – and haulage charges of £20-£25/t from England, means our approach certainly stacks-up at the moment. And if the economic balance changes, so will our cropping.”
Having started to move away from a traditional plough and power-harrow drill regime six or seven years ago, the Davies family’s reduced tillage journey really began in earnest in 2018 when they brought in Dai Llewellyn with the challenge of raising their cropping game.

“Our key objective was to apply the best, most sustainable arable approach to grass production,” Mr Llewellyn explains.  “We were also keen to make much better use of the dairy slurry. At the same time, we wanted the best balance of cropping to support the herd. And one which had the greatest flexibility to adapt to milk price and input cost changes.

“Basing our efforts firmly on building-up both the productivity and resilience of the farm’s silty clay loam soils has been a hugely-interesting challenge. The more we do, the more we learn. And the more learn, the more we find we have to learn.”

A 6 metre Horsch Avatar SD drill has become central to the cropping at Ludchurch Farms.

It allows the cereals to be drilled direct into grass or cereal stubbles and cover crops wherever possible, but is equally at home in soils lifted with the Horsch Joker or more recently-acquired He-Va Stealth.

This flexibility is important with a relatively high silt content making the ground susceptible to shallow panning; especially so with the intensity of trafficking involved in a multi-cut silage system, not to mention regular umbilical slurry applications.

“We’ve learnt how important it is to get pour soils into the right condition for direct drilling in the first place and keep them there with strategic low disturbance metal at depth whenever necessary,” points out Mr Llewellyn.

“Despite a reasonable pH, the 150ha block of land that was the main recipient of the dairy slurry in the past caused us particular structural problems early-on through high magnesium levels. A half-field trial showed us lifting plus a good dressing of Calcifert could raise first cut silage yields from just over 5t DM/ha to nearer 6 t. So, we’ve applied this learning to the whole area.”

The team has also improved soil condition and performance markedly by moving from Italian ryegrass leys to mixtures of mainly tetraploid ryegrasses and festulolium. These produce much denser swards that protect the soil surface better and give the ground more structural strength. The fact that they go into heading less rapidly has been valuable in giving extra leeway in the harvesting too.

Another essential in both respects has been a grass cutting height of 4” rather than a more traditional 2”. This sacrifices a little first cut yield – although mainly of stem. However, it reduces stress on the crop to massively improve recovery and subsequent yields as well as its contribution to the soil.

Alongside this, the value of the bio-stimulant, PhysioCrop and growth enhancer, Smartgrass have become clear in large-scale carefully-replicated farm trials run over the past two seasons. 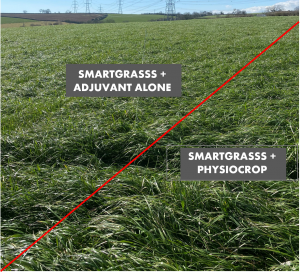 Together, their combination of gibberellic acid, free-amino acids and foliar nutrients applied four weeks ahead of harvest boosted first and second cut fresh matter yields in 2021 by an average of 10% and 15% respectively to a total of over 42t/ha.

The single mid-March SmartGrass application that has become standard gets the season off to an early start, enabling mid-May yields to be secured in the third week of April. And PhysioCrop is now being used widely as a routine on the cereals as well as grass. 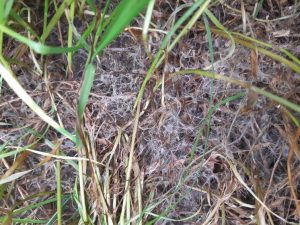 Pembrokeshire: Tramline comparison of SmartGrass and PhysioCrop – visible increase in mycorrhizae populations on the surface in the treated areas.

“These are really valuable extras in our improvement efforts,” says Mr Davies. “But apart from cutting as far back as much as we can on cultivations, the most fundamental change in our management has been to make the greatest possible use of dairy slurry across all our cropping.

“In the past it was more a matter of finding a place to put it. Now, every part of our ground can be served with our separated slurry storage and umbilical application system; and one which confines tankers to one small area of each field headland to minimise pressure on the soil.

“Analysing the slurry allows us to apply around 35kg/ha available organic nitrogen plus liquid N+S for each silage cut. We apply a similar amount of slurry N to the winter cereals in two spring splits and spread the separated solids on our spring crops.”

The specialist urease and nitrification inhibitor, LiquiSafe is routinely added to all the liquid fertiliser following farm trials showing it consistently gives the same crop performance from 15% less nitrogen. Using it also means all the non-organic N the cereals need can go on in a single early spring application.

“Always applying the liquid fertiliser immediately ahead of the slurry means the inhibitor is helping to control our organic nitrogen utilisation too for the greatest all-round value,” Mr Llewellyn adds.

“Which is exactly what our mixed rotation does. Sown from an air seeder on the Cambridge rolls, the grass leys go in simply and very effectively in late summer after a cereal with little or no cultivation to perform strongly from the following spring.

“What’s more, three or four years of grass sets up the ground really well for winter wheat and is perfect for controlling the black-grass imported in purchased straw in the past.

“Hybrid barley also works well for us and we always grow a decent area of spring cereals – mainly wheat because it’s better for the cows – to give enough land for the separated slurry solids, of which the herd produces more than enough. We’ve started drilling this directly into a cover crop of phacelia, black oats and oil radish. But it’s very much a work in progress to get everything right here.

“All the wheat we grow may be for stockfeed, but disease control remains crucial – especially the Septoria which can rip through like a wildfire in our warm, wet climate.  That’s why KWS Extase, Graham and Fitzroy are our first choice winter wheats – of which Fitzroy is by far the cleanest this season, and Graham stands out for straw we can field dry without  going too brittle.”

Amongst the other things the Ludchurch Farms team have learnt over the past four years are the importance of:

“It’s all been coming together really encouragingly in the field,” Mr Davies concludes. “The only cloud on the horizon here is the Welsh Government’s insistence on make the whole country an NVZ.

“Our umbilical regime for applying carefully controlled and targeted amounts of separated slurry to growing crops carries the least possible risk of nitrate pollution. Yet the NVZ limits on organic manuring will force us to cut back hugely on this resource which is so valuable for our soil condition and productivity, and buy-in a whole lot more financially and climatically- costly fertiliser. And what will we then do with the muck? It’s crazy.”

There’s more information on the Smart
grass and Physiocrop trials at Ludchurch Farm, in the videos below.