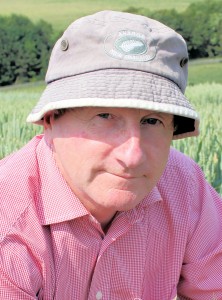 “Scotland has the highest wheat yield potential of anywhere in the world,” he told the 60-plus growers from Easter Ross, the Black Isle and Morayshire attending the St Martins iFarm open day. “But it also has particular production challenges which can only be overcome with the best informed local variety choice and agronomy.

“Guided by official HGCA and SAC trials, you have to dig deeper into variety performance under local conditions if you are to convert the potential today’s varieties offer into consistent improvements in farm performance and margins.

“Growing the wrong wheats can be hugely costly in both crop output and inputs. However, with varieties primarily bred in and for eastern England, picking the best isn’t easy. Rather than the faster-developing ‘sprinters’ of the more southern climes, you need varieties that will last the pace in your longer growing cycle. You also need far more robust levels of both Septoria and lodging resistance than most.”

Given the extent to which the relative strength of varieties in these and other important respects can vary widely with location and sowing time, Bill Angus advised growers to  make their choices carefully on the evidence of good local research intelligence to complement the  official ratings. He also urged them to take equal care in matching their agronomy to specific local variety strengths and weaknesses.

“As the best basis for this, look for accurate information on how wheats perform under the conditions in which you’re growing them,” he insisted.  “And avoid inadvertently putting all your eggs into the same ‘genetic basket’; something that’s all too easy to do with so many leading varieties – even from different breeders – being so similar genetically.

“Look for reliable evidence of how varieties do when challenged at different drilling dates, with different levels of nutrition and under different fungicide regimes too. That way you and your agronomist will be able to support them with the most appropriate nutrition and crop protection.  Again this may be quite different from other parts of the country.

“It’s all about harnessing the sort of practical, research-based intelligence being generated by the substantially expanded Scottish trials with which I’m involved as Agrii’s wheat breeding consultant; crop intelligence which helps you better understand the make-up and needs of individual wheats so you can really maximise your production while minimising your growing risk.

“This is especially important against the background of the funding shortfall that has so seriously limited research in Scotland in recent years, not to mention the increasingly extreme seasons we’re having these days,” Bill Angus concluded.