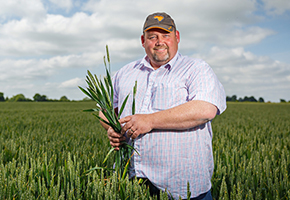 A Norfolk farmer has been crowned a ‘Rural Community Champion’ in the East region, following a nationwide search to find local community heroes.

Agronomy business, Agrii, launched the Rural Community Champions competition in January. It asked the farming community and general public to send in their nominations as part of its nationwide campaign to identify and celebrate the people who make a real difference to the rural communities in which they live and work.

David Jones, farm manager at Morley Farms in Wymondham, Norfolk, was one of three finalists to be selected by the judging panel – one from each Agrii region – North, East and West. He was nominated by his friend, Jon Brooks, for all the educational work he does for the farming community within the area.

Part of David’s work includes organising farm visits for local schools, taking the children out on the farm and talking about where food comes from. He also champions the farming industry to the general public on BBC Radio Norfolk, with the aim of trying to better inform the wider community on farming and food issues. Additionally, he recently commissioned some innovative videos to use as an educational tool to help promote agriculture, and to make teaching about farming more captivating and interesting. (www.farmingismagic.co.uk) He is also regional coordinator for Open Farm Sunday, which saw hundreds of farms across the country open their gates for visitors.

Commenting on his nomination of David, Jon said: “David was unaware that I nominated him, so it must have come as quite a surprise when he learned he was a finalist. His passion, enthusiasm and endless energy in promoting agriculture outside of the industry really sets him apart and it’s definitely the reason I nominated him. I’ve known him for over eight years and every time I see him he is doing something extra to help educate and inspire the local community.”

David was chosen as a finalist from over 100 nominations from across the UK and will receive £500 in prize money to put towards his local projects. The overall national winner will be chosen from the three finalists by Agrii customers at Agrii iFarm events this summer and will win a total of £1,000.

Speaking about his win, David said: “I am delighted to be recognised for my work in the local community and it’s fantastic to be chosen as a finalist in this competition. When visitors come to a farm they often expect to see animals, but not all farms are like that, so when they come to my farm I try to come up with inspiring ideas to make fields of wheat fascinating and relevant to these people. It’s all about getting people enthused by farming and further educating those out of the sector!”

Mark Thomas, Agrii’s Head of Marketing said: “We had a truly excellent response to our Rural Community Champion competition and it’s clear to see that there are many people who are making a big difference to their communities. This competition gave people the chance to show that this hard work isn’t going unnoticed in their local area. Our three shortlisted finalists are all very deserving, with David being a true champion of the rural community in the East region. We wish him the best of luck in the final round.”

The Rural Community Champion campaign was run in conjunction with FCN, the charity supported by Agrii which provides guidance and support to farming families in times of crisis. Through campaigns like the Rural Community Champions project, Agrii hopes to raise the profile and highlight the importance of rural communities, and in turn demonstrate the support that FCN can offer farming families in times of need.