Improving P availability for a broad range of crops

Our new product – Agrii-Start Release – works to Release Phosphorus tied up in the soil pools making P more available to plants. Built on our unique P-Reserve technology, Agrii-Start Release is particularly effective on High P Soils where there is no justification for P fertilisers but where P may be a limiting factor because it is locked up or not readily available to establishing crops.

Spring Barley trials at the Agrii Carnoustie iFarm site, recorded a yield response of + 0.45t/ha (Harvest 2020) with the inclusion of Release, and Grain Phosphate levels were elevated by 7.5% P – a notable increase in what has been a really challenging year. Agrii-Start Release can be used on a broad range of crops including cereal crops, beets, forage crops, vegetables and potatoes.

Many vegetable crops are very responsive to phosphorus, particularly alliums and carrots, although good responses are also seen in other crops including lettuces and legumes. Work carried out by David Stone at Wellesbourne in the 1990s showed the benefits of early phosphorus availability via fertiliser placement, and this set the standard for much of today’s commercial practice around the fertiliser application.

Chris Wallwork, Agrii Technical Manager for Horticulture, says: “Agrii-Start Release is particularly relevant to vegetable crops, not only because many of them are very responsive to phosphorus but also because many vegetables are grown on soils with a fairly high P index.”

Agrii-Start Release is a ‘soil phosphorus activator’ which works to displace phosphorus which is locked to other elements such as aluminium, calcium and iron in the soil, releasing them into the soil so they are available for plant uptake. One of the benefits of improved P availability is improved root growth and higher root mass, meaning the plant is able to maximise the uptake of other macro and micro-nutrients.

“It is a catch-22 situation,” adds Chris. “You need phosphorus to get good early root growth, but you need the roots to grow early in order for the plant to obtain the phosphorus. Therefore, anything that makes P more available to the plant from the beginning is of benefit to overall crop yield and quality.”

Where vegetable crops are grown on soils with high P indices due to historic fertiliser use, Agrii-Start Release can make the existing phosphorus in the soil more available, reducing the need for additional P fertiliser and making it extremely good value for high-value crops such as field vegetables.

Agrii-Start Release has been in development for ten years but this is the first time that it has been commercially available to arable farmers and vegetable growers. Agrii are conducting a number of trials to determine the optimum timing and method of application.

“We are recommending that Agrii-Start Release is used pre-sowing or pre-planting as it may cause damage to newly planted or emerged crops,” explains Chris. “In dry soils the use of a silicone wetter (such as SP058) is recommended to improve the movement of Agrii-Start Release in the root zone, but care must be taken when using residual herbicides, so you should always consult with your Agrii agronomist.

“Where Agrii-Start Release is applied pre-planting in situations with fairly shallow power cultivations there may be a benefit to applying it ahead of the cultivator so that it is incorporated into the root zone, while deep cultivations, such as those using bed formers may dilute the product too much. That is the type of thing that our trials this spring will investigate further.” 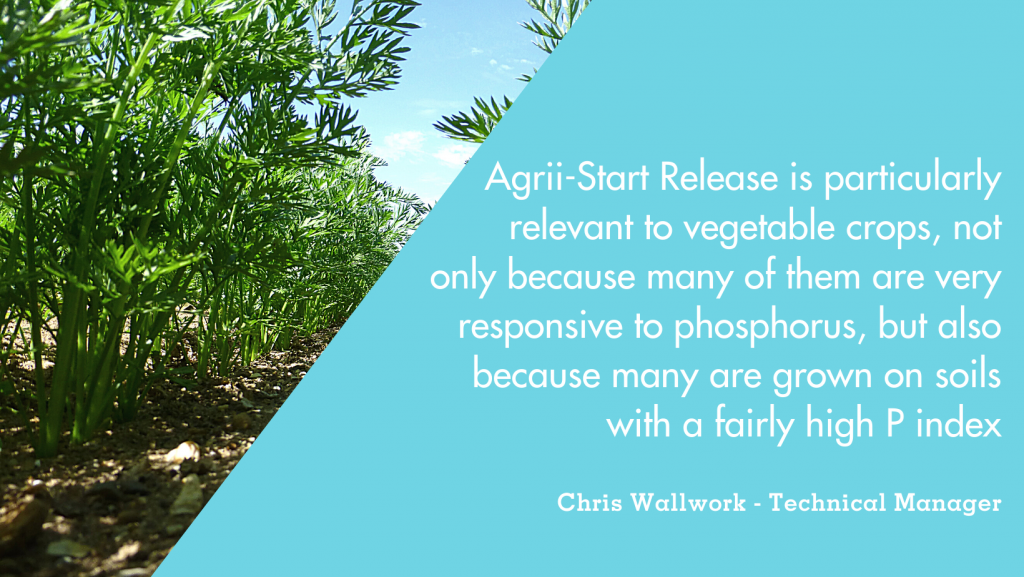