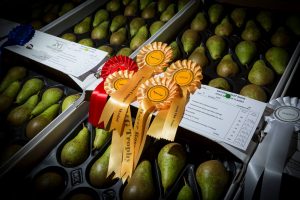 This year’s winner of the Worshipful Company of Fruiterers medal at the National Fruit Show is Colin Bird, who is technical support manager for the fruit business Agrii, the agronomy services company.

Mr Bird also won the best pears in the show prize for the second year running. He won with conference pears, which make up less than one tenth of a one hectare trials site which Agrii runs at the NIAB/EMR research station in Kent.

Agrii took the demonstration site for fruit production to give its fruit agronomists the chance to test ideas about crop management and, for instance, to look at the effectiveness of current and novel pesticides, generating new information that they can share. With question marks over the future of herbicides such as glyphostae, Mr Bird said the site will be used to look for possible replacements. With a range of fruit clones and varieties all on the same site, growers will have the chance to assess for themselves the earliness, precocity and growth habit of each, which they can’t easily do anywhere else.

The conference orchard was planted in March 2013 and has subsequently been joined by stone and soft fruit. “We have shown that by following good agronomic practice, we can produce award winning fruit,” said Mr Bird. “We’ve done that twice – so it’s no longer a fluke in my own mind. By applying attention to detail and timeliness, we can produce the sort of quality required by retailers. I have just joined the list of some very capable UK growers – so now we must try for a third time lucky next year.”

Mr Bird manages the site and does the pruning with a colleague, and Agrii buys in labour from NIAB/EMR to do the fertilising, basic spraying and crop husbandry. “Everything is run on commercial lines – this is not a hobby farm,” said Mr Bird, a commercial horticulturist who studied at Writtle University College and has been involved in fruit production since 1979.