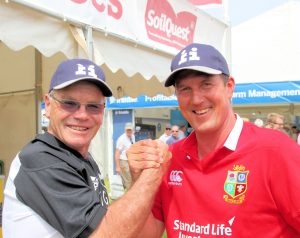 More than a quarter of a century of cutting edge world wheat record-holding experience was brought together by Agrii at Cereals 2017 to compare notes and plan to push performance beyond the 17t/ha mark.

Newly-crowned Guinness record holder with his 16.79t/ha crop of Oakley, Eric Watson from Ashburton in South Island, New Zealand came face-to-face with Northumberland grower, Rod Smith of Beal Farm near Berwick-upon-Tweed in Northumberland who recaptured the record from the Kiwis in 2015 with 16.52 t/ha from his Master Seeds crop of Dickens.

They were joined by brothers Gordon and Jim Rennie from Clifton Mains in Midlothian whose 13.99 t/ha record from a blend of Mardler, Maris Hobbit and Maris Hustler stood for no less than 23 years from 1981.

Providing extra expertise on the day were Agrii agronomist, Andrew Wallace who worked with Rod to smash the previous 15.64 t/ha record held by Mike Solari from Oamaru in New Zealand and wheat authority, Bill Angus responsible for breeding the Einstein with which he did it.

With both the most recent record holders seeing their combine yield meters hit high spots comfortably over 20 t/ha in places, there was widespread agreement that whole-field yields of 17.5 t/ha should be within reach. Especially so from the British perspective, with Rod Smith working at 36m tramlines against the 48m system employed by Eric Watson and, arguably, having more room for improvement through the greater use of precision technologies.

“Although moving to wider tramlines would undoubtedly help, 36m is a realistic maximum for us at Beal given the number of telegraph poles we have to contend with,” pointed out Rod. “Making as much use of variable rate sowing and fertilising as Eric has been doing for many years is, however, something Andrew and I are actively working on, having had the whole farm SoilQuest scanned. 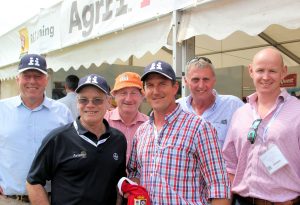 “While we don’t have Eric’s option of irrigation, we generally don’t have the need either. And we’re fortunate in having a longer growing season, although this has its own challenges. We definitely see room for improvement in a number of areas of our management.”

While they have obvious differences in their wheat growing, Eric Watson and Rod Smith share the same passion for continuous improvement and attention to detail in all aspects of their crop management.

In looking ahead to achieve the very most from their crops as cost-effectively as possible, they are equally insistent on the importance of improving soil structure and biology; using quality seed from well-proven varieties that best suit their conditions; applying as much precision as possible in their use and timing of inputs; and employing micro-nutrients alongside fungicides to optimise crop health as well as performance.

“We’re obviously disappointed to see the record go back to New Zealand,” reflected Jim Rennie, who also runs Agrii’s northern region.  “Even so, over the past 40 years we’ve still held it here in Britain for more the double the time it’s been down under.

“As part of the Agrii research-driven commitment to help British growers out-perform with the least possible risk in an increasingly uncertain world, we’re determined to bring the Guinness crown back to where it belongs just as soon as we can.

“However, Eric and Rod fully accept just as Gordon and I found back in 1981 that the essential ingredient in doing this alongside the most effective and precise agronomy is the right season.

“Our whole seed, nutrition, precision and agronomy team is working closely with Rod to show the world what the ‘old country’ can really do once again when this comes along.”