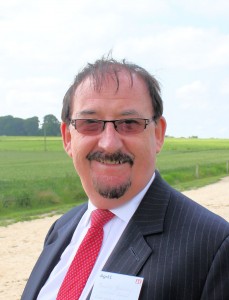 Three years into its 20:20 Wheat project to deliver potential wheat yields of 20t/ha within the next 20 years and Rothamsted Research is forging ahead strongly on a number of innovative, integrated and inter-disciplinary fronts, reported Institute director, Professor Maurice Moloney at this year’s AgriiFocus near Marlborough.

“Agrii’s Best of British Wheat 15t Challenge is fantastic in showing just how much can be done with existing varieties and techniques,” he commented at the grower event. “Our work complements this with fundamental, longer-term research to overcome key barriers to improved wheat productivity.

“We’ve already identified valuable opportunities for maximising the crop’s yield potential by improving photosynthetic pathways that are notably less efficient in cereals than in other crops.  At the same time, we’re identifying some excellent routes for improving the efficiency with which nitrogen is both absorbed by the roots and mobilised from the leaves and stems to the grain.

“In parallel, we’re exploring a range of exciting ways of protecting this yield potential through interventions with the genes responsible for Septoria tritici leaf penetration and the plant signalling mechanisms involved in fusarium infection and mycotoxin production, in particular.”

Add to this a range of investigations into improving root architecture and penetration of ‘strong soils’, developing root resistance to take-all resistance and combatting the heat stress at flowering predicted to be a far greater yield threat than drought in the future and the Rothamsted project is clearly charting the way ahead across a wide spectrum of activity. And this before even considering the Institute’s pioneering wheat GM work, the first practical results of which  –  aimed at giving excellent protection against aphid attack – are currently in field trials.

“A relatively small percentage improvement in photosynthetic efficiency would make all the difference to yield potential,” stressed Prof Moloney. “And we know Septoria is causing us up to £700 million of crop losses annually. So the prize we’re seeking in our R&D is very substantial.

“As well as working in close partnership with plant breeders facilitated by Defra and BBSRC pre-breeding programmes, I see Agrii’s extensive and scientifically robust agronomic research network as an important tool in delivering the practical benefits of our work to growers as rapidly and effectively as possible.

“After all, our R&D is only ever as valuable as the extent to which it is actually taken-up and employed by growers to improve both their economic and environmental sustainability; which depends on the best research-led demonstration, support and advice in the field where it counts.”