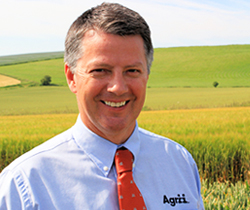 He replaces Declan Giblin, who reverts to his position as Chairman of Agrii. Declan will now focus his attention on the future strategic development of Agrii alongside his role of Head of Corporate Development for Origin. Declan will be working closely with David and the Agrii Senior Management team to position and equip the business for the future.

Mr Giblin said: “Not only does David have a farming background but he also brings a wealth of experience, gathered from working across a range of businesses where he held a variety of senior management roles including BGL (Insurance), HSS (Hire Services), Caudwell Communications (Technology) and ASDA (Retail). His experience spans commercial, retail, finance, sales, operations, distribution and strategy.”

David grew up on a family farm near Stranraer. He graduated from Newcastle Upon Tyne University with BSc Hons in Agriculture in 1987 and returned to his family farming business. He helped return the business to profitability, before moving to Yorkshire and joining Asda. David is a Fellow of the Chartered Institute of Management Accountants.

“I would like to take this opportunity to wish David every success in his new role and I look forward to working with him as we deliver the next stage of Agrii’s development,” Mr Giblin concludes.

David Downie says: “Having spent my formative years in farming, it is great to be given the opportunity to lead an organisation of the quality of Agrii, serving the agricultural community at such an exciting and challenging time for our industry in the UK. I am looking forward to working with the Agrii team and our customers as we face these challenges together.”