Building on a Traditional Recipe with Innovation in Fife

At first sight Lacesston at Gateside near Cupar is a traditional North east Fife family farm. Potatoes and spring barley are its mainstays, with soft wheat grown for distilling and oats for Quaker. All its sandy loam arable ground is ploughed. And 60 head of cattle are finished each year on a silage-based ration supplemented with home-grown barley.

There is, however, nothing traditional about the way John Weir farms the 300ha holding. One of the first growers in the country to map his soils over 20 years ago, he has since made the most of variable rate liming, P&K application and both cereal and OSR seeding with RTK precision. 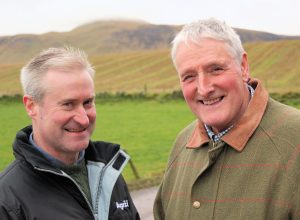 Amongst other things, he grows Italian ryegrass as a winter cover ahead of potatoes; swaps straw for muck with several neighbours; employs home-grown energy to reduce potato storage costs; uses benchmarking to monitor and improve performance; is currently sowing spring oats in September; and is set to try variable rate potato planting.

With this sort of forward-thinking and the level of care and attention he puts into soil management, it is hardly surprising John carried off the 2019 Scottish Arable Farmer of the Year award for the business he runs in partnership with his father and mother, John and Nancy and wife, Tammy.

Soil care, potato growing and ploughing may seem strange bedfellows to many. But certainly not to John and Agrii agronomist, Donald Hay who has worked with him for more than 30 years and first introduced him to soil mapping.

Together they have found they can maintain the farm’s soils in very good heart in a firmly potato-focused rotation and without cutting down on tillage. And this despite sloping ground, 400 feet above sea level receiving 900 mm of annual rainfall – comfortably exceeded last year.

“We haven’t been tempted to reduce tillage because we need to plough ahead of and behind potatoes, and we’re not big enough to justify the cost of an extra establishment system,” John explained. “So, we have to take a different approach to soil health improvement; one that involves treading lightly on our ground, being very careful when and how we work it, and having enough flexibility to do both.

“Above all, we’ve kept firmly within our limitations and resisted the temptation to grow beyond them. Yes, we could handle more acres with our existing equipment and team. And it would certainly spread our machinery costs. But a single difficult season like we’ve just had would seriously stretch our potato lifting capacity. So, we’d have to go onto land with heavy kit when we really shouldn’t be anywhere near it. Which is the last thing we ever want to do.

“Despite very challenging weather this past autumn, keeping within ourselves and only contracting land within a six mile radius of our store means we’ve been able to bring all our potatoes in without creating the sort of soil damage that would take many years to put right.

“After difficult lifting years in 2011 and 2012 we no longer grow potatoes on heavier ground. We’ve give-up growing OSR on part of the farm for the slug problems it created. And we’ve extended our rotation from potatoes every six to every seven years to give more time for the soil to recover,” he added.

Over the years, John has built a good relationship with Greenvale at Duns, with whom the farm has pre-pack contracts for white potatoes through the spring and summer months. With renewable energy from his solar panels and wind turbine allowing him to turn his 20 year-old potato shed into ‘a serious fridge’ with great economy for the 3500- 4000t he lifts each year, he’s well-placed to take advantage of the extra returns from extended storage.

Acutely conscious of how much pressure potato-growing puts on the ground, John Weir and Donald Hay take particular care not to challenge the farm’s soils in the rest of the rotation. Spring barley suits them nicely in this respect. It’s much gentler on the ground than a winter crop, and they average 6.5t/ha of good malting quality grain, often grown three years in a row.

The crop works well after potatoes, with Laureate currently their favoured variety for the extra disease resistance it offers as well as its local marketability – important in allowing harvest movement to give enough space for the potatoes.

Equally, land light enough to plough well in the spring and which doesn’t need frosting to create a seedbed means cereal stubbles can be left nicely weatherproofed over the winter.

“The combination of regular ploughing and a good proportion of spring planting means we’re able to keep well on top of grassweeds here,” noted Donald. “There are plenty enough problems with black-grass locally and, apart from the obvious impact on yields and costs, we have to keep it out so we can sow our winter crops early enough to avoid clashing with the potato-lifting.”

To spread the workload from the spring, around a third of the cropped area at Lacesston is autumn-sown each year. This season 50 ha of wheat is down to KWS Jackal in place of previous favourite, Motown with 12 ha of Anastasia oilseed rape to provide a true cereal break, 12 ha of Sunningdale hybrid barley for beef feeding and 30 ha of Conway oats.

Those familiar with oat growing will find the idea of drilling spring variety, Conway in September interesting, to say the least. Along with several other members of the OatCo Group, the team are giving it a determined try, in place of the Gerald winter oats they grew previously.

“Conway is Quaker’s preferred variety for the health benefits of its beta-glucan content but spring oats really clash with John’s potato sowing,” Donald Hay pointed out. “And they can be late to harvest. “So, we’re seeing if it’s possible to get the best of both worlds by drilling them in the autumn.

“They grew incredibly well, I have to say – far too tall and lush for our liking. As a result, they needed a very robust fungicide and PGR programme. So, for the 7t/ha we brought in (against our normal 8.5t/ha expectation with Gerald) they didn’t really stack-up at the premium available. However, they came to harvest in mid-August – a good two weeks before winter oats and ahead of spring barley – giving a good early entry for the wheat that has to be sown ahead of potato lifting. They also produced plenty of decent straw for livestock bedding.”

“Having proved autumn sowing is feasible, we’re giving it another go this season with farm saved seed, and exploring the opportunities for a level of premium that would make it viable for us to continue,” said John.

For the past two years, John and Donald have been experimenting with a cover crop of Italian ryegrass ahead of potatoes, too. Undersown in the previous spring barley, it has provided useful extra winter forage for the cattle as well as capturing nutrients that might otherwise be lost over the winter and keeping the ground protected from heavy rainfall.

“We haven’t seen any lift in potato yields yet,” John Weir reported. “But the ground has certainly ploughed-up well for the potatoes and the soil has been noticeably more friable. It’s another work in progress.”

Also now on the cards – thanks to the prize from his Farmer of the Year award – is an extension of Lacesston’s precision agronomy into potato planting.

Despite fairly consistent soils, variable rate liming, phosphate and potash for a good 15 years have proved very valuable in evening-up spoil indices – especially across fields merged by the past removal of boundaries. With potatoes in the rotation and accounting for regular applications of farmyard manure, the annual application plans have also allowed major savings in phosphate use.

For the past five years, variable rate cereal and OSR sowing to the soil-mapped fields have also worked well in evening-up yields. John had actually been increasing seed rates manually on the poorer parts of his fields for many years, but never reducing rates on the kinder parts. Automating this with the accuracy of his RTK system, has consequently, resulted in worthwhile seed savings.

“Precision sowing has worked well for our cereals and autosteer has been a real boon in maximising the length of potato beds we can fit into every field. With full GPS guidance on our potato planting tractor in 2020, we want to use the Soil Essentials package we won to move into variable rate potato planting,” he said.

“Spacing-out our planting in certain parts of the field to increase the proportion of bakers we produce without decreasing overall yields would be extremely worthwhile. Even increasing our baker percentage by 1% would make a major difference to our returns.

“We are continually looking for ways we can do a better job with what we’ve got,” concluded John. “Our farming simply has to be as resilient to climate as well as political and market change as we can make it. At the end of the day it all comes down to managing our soils and other key resources as well as we can while being flexible and innovative enough within a system that has stood the test of time.”