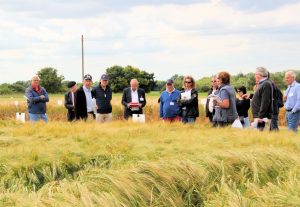 Following the success of commercial-scale barley-growing for Budweiser in 2015, the area contracted to the specialist variety, Explorer last spring increased to over 4000 ha. Subject to continued success this harvest, international brewing leader, AB InBev’s partnership with Agrii, Glencore and Crisps Malting is set to build to more than 6500 ha in the coming season, with British growers eventually replacing all imports for UK Budweiser production.

This was the upbeat message of the second annual Explorer growers’ day held by the four partners at Agrii’s Throws Farm Technology Centre earlier this summer.

The many growers and agronomists attending were up-dated on the impressive growth and development of Budweiser globally and across the UK by AB InBev North Europe president, Jason Warner; the company’s innovative SmartBarley grower support programme by global agricultural development director, John Rogers; and the unique demands of Budweiser brewing by global raw material procurement director, Adam Griffith.

They also received the latest intelligence on Explorer growing from Agrii trials and commercial crop monitoring, together with practical guidance on 2016 crop sampling and movement and initial indications of 2017 contract availability from Glencore and Crisps Malting.

“Our first full season of contracted production for Budweiser worked extremely well for all concerned,” stressed Glencore’s Nick Oakhill. “With more than twice the area and number of growers involved, this year will be the proof of the pudding.

“Continued success will pave the way for even more heavy-land growers across central and eastern England to get involved in producing the increasing amount of quality barley required to support expanding UK Budweiser production. 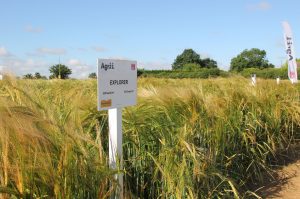 “Explorer is the only UK-grown variety approved for Budweiser brewing and is only available to contracted growers. So we have to make the very most of the crop.

“To do this our contract through Crisps has a flexible specification of 1.6 – 2.05% N – with a £5/t premium over Propino for 1.8 – 1.9% N  – and  up to 18% moisture. We’re also providing the best possible sampling and movement support, with analyses of farm samples within 48 hours and facilities to move extra grain at harvest, if required.”

“Knowing the quality of the harvest at the earliest opportunity means we can plan for it,” added Bob King  of Crisps Malting. “The more samples we see and the earlier we see them, the better we can ensure the crop is handled for the greatest value. Because of its uniqueness, we’re prioritising Explorer over all our other grain.

“As soon as we have all the information to hand we’ll be reviewing the results with AB InBev to inform their 2016/17 intake planning and allow us to agree 2017/18 requirements for contract confirmation with growers by the end of October.”

Across four trial sites, indeed, the variety produced in-specification grain with yields on a par with malting standard, Propino from nitrogen applications of 150-180 kg/ha. At the same time, 2015 records from almost 1000 ha grown commercially on 21 farms revealed an average yield of just under 8t/ha with nitrogens on intake averaging 1.81%. 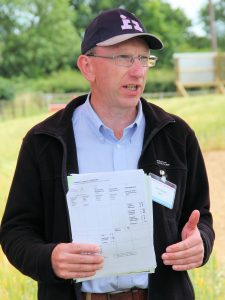 “Growers were well-pleased with their initial experience with Explorer,” reported Agrii seed trials manager, Colin Patrick. “Yields of up to 10.4 t/ha from one 120 ha crop showed just what the variety was capable of.  A notably rapid take-off from late March to early April drilling underlined its suitability for heavier ground; and earlier maturity than most other spring barleys was also widely appreciated.

“The variety proved its competitive abilities against black-grass in no uncertain terms too. On one Cambridge farm we recorded just 120 ears/m2 of blackgrass in the Explorer compared with 750 ears/m2 in an undrilled trial strip alongside it. Not only this but the weed ears in the crop were notably small and late to emerge through the canopy.”