Results from extended Agrii trials and records from Explorer spring barley grown for Budweiser production on nearly 40 farms last season have confirmed the particular value of this contract-growing opportunity.

What is more, successful large-scale proving of the specialist Agrii malting barley recipe pioneered with Glencore and the Crisp Malting Group opens the door for an expansion of the contracted acreage to 6000 ha or more to supply AB InBev’s entire UK Budweiser brewing needs.

At the same time, detailed records show 2015 yields across 978ha grown commercially on
21 farms averaging just under 8t/ha, with nitrogen specifications on intake averaging 1.81% to secure a useful flat rate premium over Propino.

“Most growers were well-pleased with the results under our growing protocol,” Colin reported. “Yields certainly equalled Propino on farms where both varieties were grown, and Explorer was especially appreciated for its weed competitiveness by those on heavier ground with black-grass problems.

“Explorer takes off rapidly from late March or early April sowing, making it well-suited to heavier ground,” he added.  “And earlier maturity than most varieties gives a good entry for oilseed rape.” 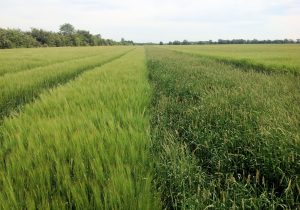 Explorer grown on Edward Davison’s Childs Farm, Elsworth near Cambridge showed its competitive prowess in no uncertain terms last year. While the black-grass population in an undrilled strip across the field (right) was 750 ears/m2, that in the crop (left) averaged just 120 ears/m2. The ears were also notably small and late to emerge through the canopy.

Although, at 1.75% N, the crop came in just below the ideal specification, it averaged an impressive 10.4 t/ha of Propino quality grain, leaving Edward and his Agrii team more than happy with the result.