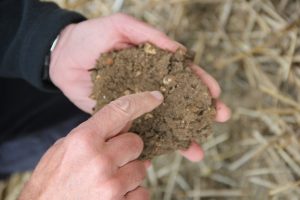 Earthworms are the best, most practical yardstick of the biological health of arable soils in the experience of both Syed Shah and Agrii senior agronomist, Andrew Richards who have assessed a large number of different soil flora and fauna in their soil health improvement work at AgriiFocus and local iFarms.

Within soil types they find earthworm populations far more reliable indicators of soil health than the most sophisticated, modern biological laboratory tests. They are also far easier as well as less expensive to measure.

“The fact that earthworm populations tend to be low under the water-logged, compacted, low organic matter and acidic conditions most harmful to soil health makes them such a good indicator,” insists Andrew Richards. “However, they do need to be measured at the right time and in the right way for the greatest value.

“Because you won’t find them anywhere near the surface in dry conditions you have to assess worm populations when the soil is wet and soft – in November or March-April. It’s also advisable to measure them by weight rather than numbers to adequately account for differences in size.

“There are three distinct types of earthworm, but we find it’s not worth trying to separate them,” added Dr Shah.  We just weigh all the worms we collect from 20 cm3 soil samples. On this basis, we’ve been recording 50-60g/m2 under two-pass cultivation systems and 100-120g/m2 with one-pass and strip tillage regimes. 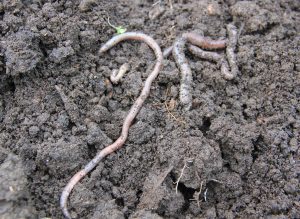 “Alternatively, we count worm casts or middens on the soil surface. In which case, we’ve found 0-3/m2 is typical for ploughed land, 3-15/m2 for min tilled land and 15-60/m2 with zero tillage.”

Alongside earthworm populations, Syed Shah and Andrew Richards stress that drainage, organic matter levels and pH are the most important factors in assessing soil health.

“Earthworms are a great general indicator, but a good understanding of these other important criteria as well as soil texture is essential if you really want to improve the resilience of your most vital resource,” Andrew Richards said.

“Visual assessments are every bit as important as laboratory measurements in soil quality. After all, no amount of extra organic matter will make much difference to soil health if ithe ground doesn’t drain well enough. And huge variations in the balance of the many different beneficial and harmful organisms making-up the soil across fields is sufficient to confound most current biological testing.

“The whole aim of the work we’re doing is to cut through the confusion surrounding soil health with the sort of practical science and advice that allows growers to make the sort of improvements that will stand them in good stead in the most reliable and cost-effective ways.”