Yattendon Estates’ arable business straddling the M4 between Reading and Newbury has been transformed over the past 15 years in a determined drive for improvement informed by the best Agrii agronomy and benchmarking with like-minded growers across southern England.

The 2100 ha of mainly Grade 3 ground – ranging from chalk at one end through Carstens clay with large amounts of flint to sand at the other – presents more than its fair share of management challenges.

However, farms director, Alastair Jeffrey and his team of four have been averaging just under 10 t/ha from their milling wheat, up to 5t/ha from oilseed rape and comfortably over 8.5 t/ha from winter barley in recent years. All of which is a far cry from the early 2000s when the Estate’s feed wheats were struggling to reach 8t/ha and oilseed rape had been abandoned as unviable. 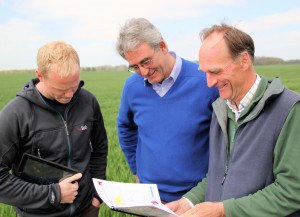 Working with Agrii, Alastair attributes this impressive turnaround to several fundamental changes – most importantly, moving away from direct drilling; shifting to tracks for all soil working;  a relentless focus on establishment; early adoption of the best varieties and techniques; and continual performance comparisons with other businesses.

“Direct drilling here in the past was driven more by necessity than design,” he pointed out. “It was doing establishment no favours whatsoever. Yet what our winter crops need above everything else is to get up and away as rapidly and evenly as possible.

“Two weeks after our oilseed rape has gone in we’ve already spent a third of the crop’s value on it. And it’s now a quarter of our cropped area. So we simply can’t risk not getting things right from the very start.

“We stopped direct drilling in 2003 and switched to shallow tillage for most of our cereals. These now go in with a Horsch Pronto drill, following Vaderstad TopDown and/or Carrier cultivation.

“We don’t stint on cultivations with our OSR though,” added Alastair Jeffery. “Mainly because we must have a fine, firm seedbed to get the rape ahead of the slugs which abound on our ground, courtesy of its high water table and heavy flint burden.

“Our 10 furrow reversible plough gives us almost identical work rates to the TopDown, so we’re not losing any time by using it across the majority of our 540 ha of rape wherever and whenever we need it for working the cereal ground. Indeed, we only got our winter cereals sown in 2012 because we had the plough.

“Double rolling is something we also insist on for our rape, in particular, wherever necessary. Otherwise, we simply can’t get our flinty ground well enough consolidated.”

Tracks have more than proved their worth for all cultivation and drilling at Yattendon too. They effectively prevent the clay smearing invariably caused by tyre cleats, and typically last three seasons rather than the one of tyres on the high maintenance ground. 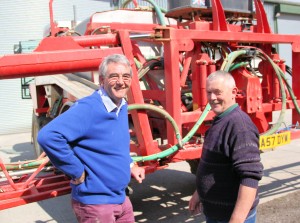 Equally instrumental in maintaining the improvement progress have been the best available wheat, oilseed rape and barley varieties. For which Alastair relies on research intelligence from the extensive variety testing programme at the AgriiFocus Technology Centre near Marlborough and commercial feedback from the company’s Maximising Arable Performance (MAP) group of 70+ southern county growers.

“We’ve switched from all feed to mainly milling wheat progressively over the years to make the most from our yield-limited ground,” he explained. “We started with Hereward, then moved to Gallant and Solstice as the AgriiFocus results gave us confidence in the emerging varieties. Following the centre’s most recent research, we’re now growing mainly Crusoe with some Skyfall.

“Our confidence has been reinforced by the latest MAP results which show Crusoe was by far the top margin earner of all wheat varieties across our group last season.

“In the same way, the barley trials led us to replace the bulk of our Cassata with Volume, which also stands out as the top 2014 earner in our MAP group. With the rape too we’ve been guided first by the trials and then by the MAP results to move to 50% HOLL rape this season and 100% next. Early decision-making here has allowed us to secure the best possible premium-earning contracts.”

As well as variety choice, Alastair Jeffrey particularly values the opportunity MAP has provided him to compare Yattendon performance overall and by crop with that of other growers in the area since he first got involved with the project in 2005.

The benchmarking system which uses information directly from Gatekeeper enables individual components of technical and financial performance to be compared with the average of the grower group and top 25% performers. It also allows comparisons to be made by soil type, farm size and individual (but unnamed) businesses with which the Estate is most similar.

“As well as setting out average crop and variety performance by yield, inputs and gross margin at standard crop values for the year across the group, the confidential annual report all our members receive gives them the opportunity to compare their individual crop and whole enterprise performance with their peers,” explained Agrii west business development manager, Rob Baker who has worked with Alastair since 2005

“Direct comparisons with the most similar members also allow Alastair and his agronomist, Craig Livingstone to examine recent performance in even more detail to identify particular strengths to build on and possible weaknesses to address in their forward planning.

“It enables everyone involved to learn from the experiences of others as well as their own
for the greatest possible technical and financial benefit.” 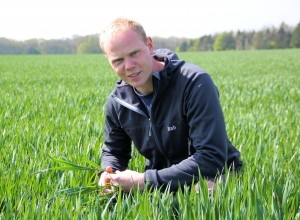 So what pointers does the latest MAP data offer to maintain Yattendon’s arable performance progress?

Well, despite the limitations of its ground, the Estate currently sits within the top quarter of the 70-strong league table in overall arable margin performance which, for the large scale of this business, is a considerable achievement.  This – and the fact that it has climbed up the table steadily in recent years – is certainly encouraging. But it also shows Alastair and Craig where they continue to have clear room for improvement.

Individual crop comparisons, for instance, show the business did noticeably better than its most similar farm – and indeed the group top 25% average – in grain selling prices, highlighting the value of a well-structured marketing regime that places more emphasis on certainty than speculation.

“Our yields for similar wheat varieties were, however,  lower than the comparison farm mainly as a result of lower fertiliser inputs, suggesting we should focus more on improving nitrogen management,” suggested Craig Livingstone. “Timing as well as overall N levels is something we’ve been addressing as a result.

“This is also an area where the figures show we might have the best opportunity for improvement with winter rape, alongside the slug control that continues to be our number one OSR challenge.

“Other particular challenges we’re addressing here include pockets of tough black-grass, Septoria – especially from the earlier wheat plantings inevitable with the acreage we have to sow – and light leaf spot in the rape which we’re seeing a lot more of across the area these days.

“Precision agronomy offers us major opportunities for the future which we’re confident will come through increasingly in our performance figures,” he noted. “Alastair really saw the value of soil scanning way back in 2005 to focus the Estate’s profitable but very capital intensive Christmas tree business on the most appropriate ground.

“Since then the whole arable area has been SoilQuested and, overlaid with additional management zones from our experience backed by extensive field-walking, we’re making better and better use of variable seed rates as well as variable P and K application and liming.”

“It’s all about not standing still,” concluded Alastair. “The seasons will always give us ups and downs. But I want – and my board needs – to see that we’re improving our place in the league table, as well as delivering growing contributions to the Estate.  Especially so as we’re intent on continuing to expand the business. There’s absolutely no point in taking on more ground if we’re not making the very most of what we’ve already got.”