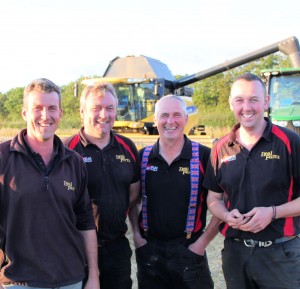 It’s official, England has emphatically reclaimed the world wheat record from New Zealand. The 16.52 t/ha seed crop of Dickens grown by Rod Smith and his Beal Farm team on 11.3 ha on the Northumberland coast near Berwick-upon-Tweed has been verified and accepted by the Guinness Book of Records, displacing Mike Solari’s New Zealand record of 15.64t/ha which has stood for more than five years.

Pushing the world wheat record yield up by not far short of a tonne per hectare is all the more remarkable for the fact that it was achieved with a strictly commercial agronomy programme involving barely two thirds the amount of fertiliser nitrogen fertiliser used in the previous record. Total input costs of under £46/t underline the financial success of the crop even at feed wheat values of little more than £100/t.

Part of the Agrii Best of British Wheat 15t Challenge, the crop grown for Master Seeds was selected for its northern potential and managed with a carefully prescriptive nutritional and crop protection programme from sowing to harvesting. Despite later than ideal sowing, this ensured the best possible level and timing of inputs to take maximum advantage of a season without serious disease or other environmental limitations.

“We’re proud to have put Northumberland in its rightful place at the top of the world wheat rankings,” commented Rod Smith. “It’s especially satisfying we’ve been able to ensure England out-performs the Kiwis at a time of such rugby disappointment.

“We may be well outside the country’s arable heartland but there’s a long heritage of first class wheat growing up here which deserves the wider recognition we hope our achievement will bring. 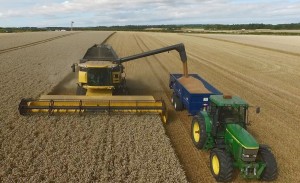 “Our whole farm and agronomy team works hard in coaxing the very most from unforgiving soils in which the ditches can’t run at high tide.  In particular, we make extensive use of tracks, sub-soiling and rotational ploughing, thoroughly incorporate straw and add 500 t of muck annually to maintain the most productive soil structure and health.

“Over the years we’ve developed a system that suits our ground and conditions well,” he pointed out. “We’ve found producing quality seed crops with integrated Agrii agronomy invaluable in helping us maximise performance and profitability across the entire 250 ha or so of wheat we grow each year.

“Having said that, it was only in 2014 that we managed to break my father Jimmy’s 11.6t/ha (4.7 t/acre) farm average wheat record set a good 15 years ago. And we’re convinced our ‘next generation’ team has plenty of room for improvement in the years ahead.”