Agronomy+ more than delivers 13:13 bread wheat in trials and practice 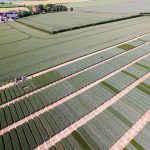 More than 13 t/ha of bread wheat at over 13% protein was the ambitious target of a new Agrii Best of British Wheat initiative undertaken with leading Group 1, Skyfall at the company’s Kent iFarm near Lenham last season.

However, it was achieved in spades with an average of over 14 t/ha and nearly 14% protein across the extensive trials programme. At the same time, guided by the trials, iFarm hosts, John Boyd Farms averaged 13.2t/ha from their 45 ha of Skyfall at 13.9% protein, with 14.5 t/ha from the best two fields. 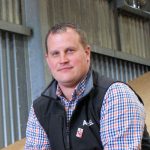 “We set up what’s been dubbed the ‘13:13 club’ trial with 63 separate treatments replicated in 169 plots to explore how we could really make the most of the RL-topping breadwheat with the best nitrogen, fungicide and trace element programmes,” explained the farm’s agronomist, Neil Harper.

“With an N-Min of 110 kg/ha giving us a good supply of residual nitrogen from the soil, we more than achieved our target with 14.05 t/ha at 13.3% protein from our lowest overall N application – 260 kg/ha. While rates of up to 360 kg/ha gave us no significant increase in yield, they boosted proteins to an impressive 14.4%.”

Unsurprisingly in such a relatively low disease season, Skyfall’s robust agronomics meant no major performance differences between the trial’s main fungicide programmes. Even so, the best programmes delivered a good 1.0 t/ha advantage over the untreated control, underlining the benefits of SDHIs at both T1 and T2 and the particular strength of bixafen when it comes to protein building.

Particularly noticeable were the responses achieved from well-formulated micronutrients applied in the right combination at the right time. A programme including zinc, copper and boron applied at all four timings resulted in a 0.21t/ha yield response together with a lift of 0.5 percentage points in protein. For a relatively low outlay this delivered a margin over input cost of nearly £85/ha.

“In a favourable growing season with low disease pressures and soils with good organic matter levels giving a steady nitrogen supply over the growing period, the trials have highlighted we can go well beyond 13 t/ha at 13% protein if we give a modern bread wheat the right agronomy,” Neil Harper noted. “And even under these conditions we can see valuable benefits – particularly on the protein front – from fine-tuning both nutrition and disease management.

“This gives us excellent leeway to hit the 13:13 target under more challenging conditions. With lower protein and yellow rust resistance ratings than some, though, a variety like Skyfall will clearly need particular nutritional and fungicide care here.” 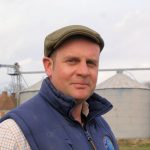 The iFarm trials proved invaluable in helping John Boyd Farms achieve equally impressive commercial results from their Skyfall last season. Not only did they top the 13t/ha mark quite comfortably at proteins ranging from 13.5-14.5% with an average specific weight of 84 kg/hl but two fields in the 45 ha block averaged 14.5 t/ha.

“We’ve always been pretty good at growing milling wheat,” pointed out Mark Boyd who runs the 1400 ha business with his father, William and uncle John Arthur. “Cordiale has been our long-time favourite, invariably giving us 9-10 t/ha and a useful premium as a second wheat.

“Skyfall looks like being our next step forward, alongside the JB Diego, Crusoe, KWS Lili and Trinity we’re also growing this season. We regularly achieve high yields and specific weights from JB Diego, so a high yielding Group 1 with similarly good all-round agronomic strengths fits us nicely.

“We drilled the 2015 crop into good clay to silty-loam ground at a slightly higher 275 seeds/m2 than normal on September 17,” he said. “It grew away vigorously from the slugs and was very well forward by the spring; so thick and well-grown, in fact, that it needed robust growth regulation at T0, T1 and T1.5.”

Altogether, the Skyfall received 310 kg/ha of nitrogen in six splits, starting with 40kg/ha as liquid urea in mid-February to promote rooting, followed ammonium nitrate in mid-March, early April, early May and at full flag leaf emergence and ending with 40 kg/ha of foliar urea at the end of June as a protein reassurance.

A total of 120 kg/ha of SO3 was also applied to ensure the correct N:S ratio, with a pre-T0 application of manganese, magnesium and trace elements followed by extra micro-nutrients at each spray timing to bolster low levels of zinc and copper, in particular, revealed in tissue tests.

“Mildew levels were concerning early on with a very thick crop, so we used a combination of prochloraz, proquinazid and tebuconazole with chlorothalonil at T0,” reported Neil. “Then we went in with bixafen, prothioconazole and spiroxamine plus folpet at T1 to counter the inevitable septoria and a showing of yellow rust.

“As we needed a PGR at this stage anyway and yellow rust was coming into the untreated trial plots we took the opportunity of our T1.5 to add a strobilurin. While this wasn’t strictly necessary, it bridged what turned out to be a five week T1 to T2 gap nicely. That way the crop remained well-protected up to our second SDHI – fluxapyroxad this time – with epoxiconazole and metconazole to ring the changes with both sets of actives.

“Our final spray of prothioconazole plus tebuconazole at T3 was mainly aimed at keeping the crop green to maximise the grain fill contribution of every leaf,” he added. “Fusarium has never been much of a problem here and tests have always shown low DON levels.”

The Skyfall was ready to harvest by the beginning of August and knowing it wasn’t a crop they could afford to leave in the field, the Boyds didn’t delay, bringing the crop in at a very useful 14.5% moisture with combining losses of less than 1%.

“The berries in the ears were fit to burst, giving us a lovely bold sample,” recalled Mark. “The crop was a dream to combine and the awns were no problem at all. We did have to slow the combine down to get the thick stand evenly over the cutter bar, though. But with the yield meter recording 22 t/ha in places, we certainly weren’t complaining.

“With valuable intelligence from the Agrii trials alongside it, the Skyfall has proved to be a Rolls Royce of a crop for us, earning us a handsome margin at a very reasonable cost/tonne and even impressing my father who rates it at the pinnacle of his long wheat-growing experience.”